Two Srimad Bhagavatam sets to one person at once! 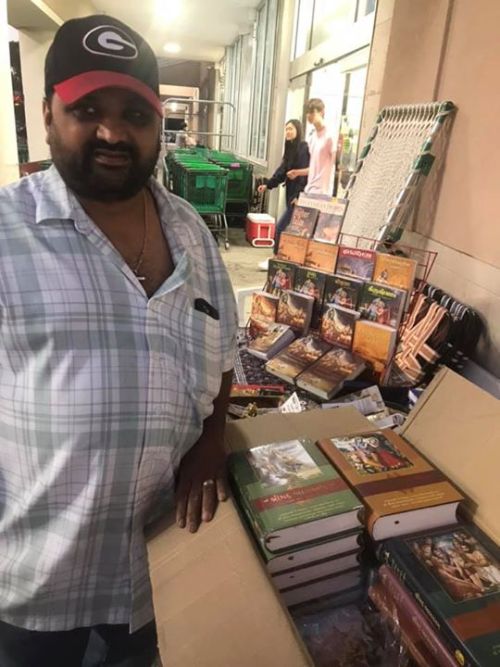 Two Srimad Bhagavatam sets to one person at once!
Shastrakrit Das: Material desires are never satisfied no matter how hard we try and still we want more of the same. Spiritual desires, on the other hand, Krishna satisfies them more than we even desire.
This nice second-generation Indian man on his own walked over to my book table and put a generous donation in my donation box. I took the opportunity to show the Bhagavatam set and explain to him a bit about the glories of The Bhagavatam. Being so pious he was visibly moved and wanted it but he had a dilemma. His wife, himself and children only read in English. On the other hand, his parents, in-laws, relatives, read only in Gujarati. So he was confused. So praying to Pancha tattva I tried my luck. I asked him why he doesn’t take one set In English and one set in Gujarati? He gladly agreed. We both were in disbelief that such an exchange took place. As he was driving away he kept looking at me. I was all trembling. Never in my life I was able to distribute 2 sets to a stranger on the street. Must be all you devotees encouragement & blessings

The devotees from Radhadesh perform Harinama during the big manifestation “Strike for Climate” in Brussels (Album of photos)
What is the role of the Kirtan leader, spiritually?
Tagged under: Nectar