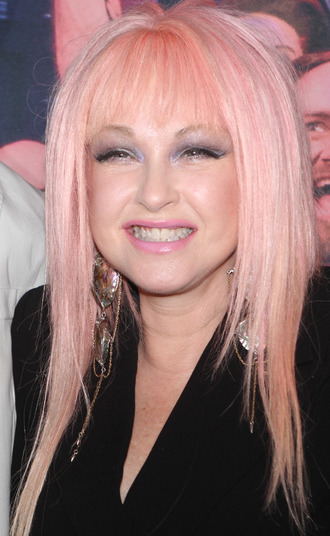 From Cyndi Lauper’s memoirs. (Cyndi Lauper, is an American singer, songwriter, actress and activist. Her career has spanned over 40 years with over 50 million albums and 20 million singles sold)
“I left home at 17. I took a paper bag with a toothbrush, a change of underwear, an apple, and a copy of Yoko Ono’s book Grapefruit. .. The situation with my stepfather was impossible. .. When I moved in with my sister and Wha in Valley Stream, we learned where we could work and eat. Like you could go to the Hare Krishna temple and if you cleaned for them, they would feed you. This was when George Harrison came out with the whole Hare Krishna action. And when I started seeing Hare Krishnas around town, they had a good vibe. I was into all kinds of spiritual stuff and I liked the chanting, and the idea that a god could be your friend instead of all the brimstone and fire I’d grown accustomed to, growing up as a Catholic. .. I could deal with a kind of god like Krishna. A god who doesn’t hate women and doesn’t stone them to death. .. So I would clean the temple––I mean, granted, the food they served was loaded with sugar but at least I was eating. It’s just that after being so hungry and then eating all that sugar, I was basically seeing stars. So I’d be cleaning the bathrooms and the pictures would kind of move, or Krishna would wink at me, and I’d laugh so hard because it was funny. But whenever I cleaned the temple, I felt like I was cleaning my heart. Then they pulled me aside and asked me if I wanted to join the Hare Krishnas. They felt I was special. They told me the head guy would choose a husband for me and I’d marry him and have children. The pièce de résistance was when they said that as a woman, I’d have to eat in the kitchen with the children, while the men ate in the main dining room after I served them. I busted out laughing and said, “Listen, I’m Italian and I already know this story about women as chattel. I don’t do that shit anymore.”

“Times were not so good. The guys next door were dealing drugs and then everybody became boyfriend and girlfriend and I still had no job and had trouble paying for food. One time I was so hungry that I looked at a picture of Krishna and thought for a minute he was giving me food, and then my hunger went away. I took that as another little miracle in my life and maybe a little payback for cleaning his temple. Either way, it was a blessing.”

“After my job at the Roosevelt Field Mall, I worked at a racetrack. I was a hot walker. It’s just what it sounds like: You walk the horses down when they’re hot. I had never been around horses before, but it didn’t matter to me. It was a job and I love animals. I would sing to the horses, too, which would kind of calm them down. I’d sing Hare Krishna chants in their ears and walk shoulder to shoulder with them.”

“Hepatitis was going around in Burlington that year. I went to work anyway but got very, very sick one day when I was there and they had an ambulance come. They took me away in a stretcher. I was so tired but I could feel Krishna inside of my body as a young boy showing me how to rest, and I knew it would be all right.”

Excerpted from Cyndi Lauper: A Memoir

Manorama Dasa: I have not read the memoir. I was searching for “Hare Krishna” photos on Google and somehow excerpts of Cyndi Lauper’s memoir popped up in the search results, so I thought it would be interesting to share. Lesson to take away from all of this: You never know who walks in the door at a Hare Krishna temple. Treat everyone with respect and kindness, including your temporary cleaning staff.

How to Get Through Tests
The knowledge of the arrogant defeats the purpose of knowledge
Tagged under: Nectar

Ratha Yatra at Cooly Rocks On Festival in Australia, 09 June…

Deliverance of Shakatasura and Trnavarta. A special Edition on…