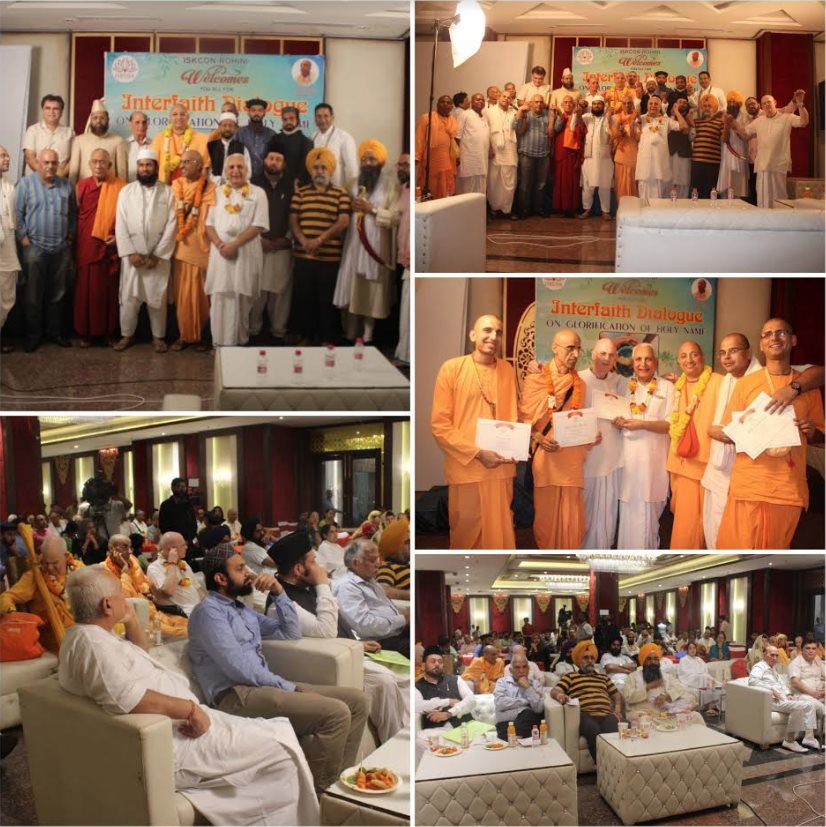 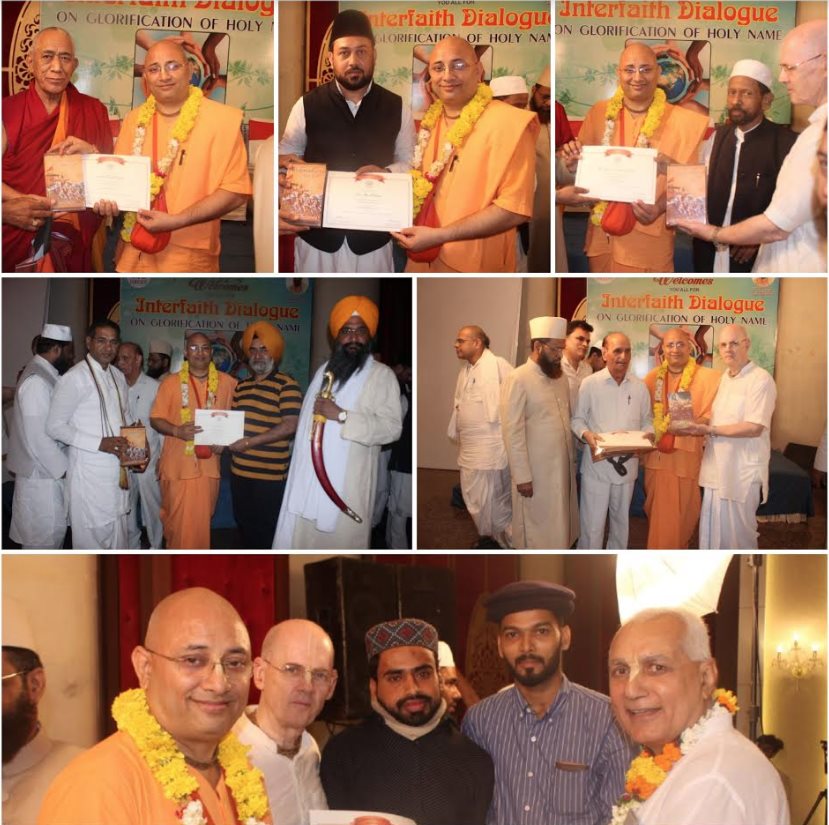 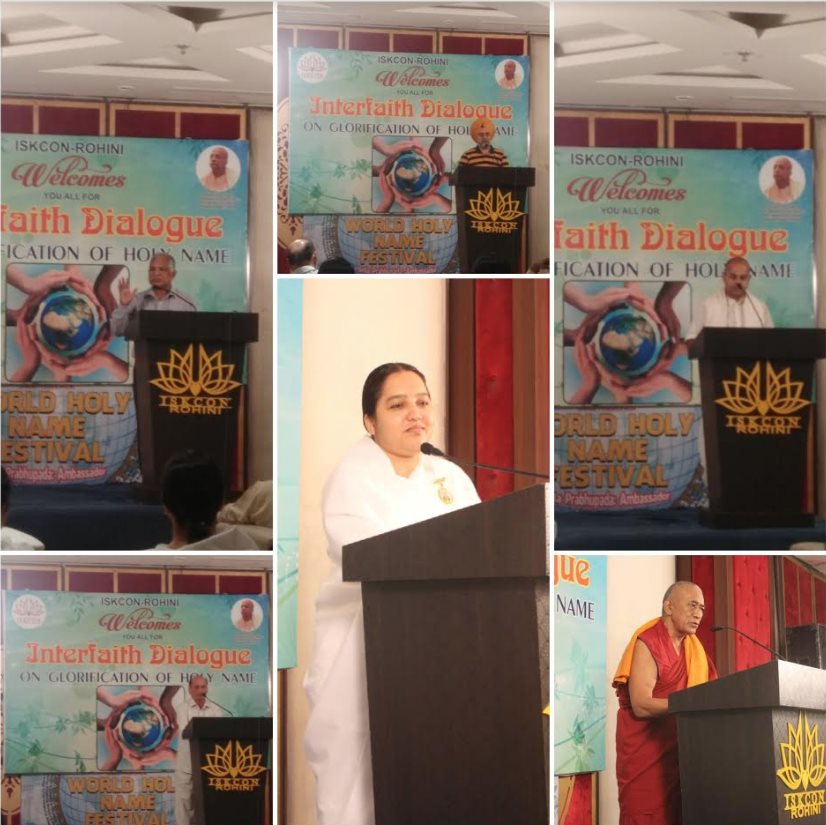 International Society for Krishna Consciousness (ISKCON) is no more a strange organization in the field of spirituality. It’s already celebrated the golden jubilee of its establishment & devotees all around the world are relishing the joy of devotion today. All credit goes to ISKCON Founder-Acharya HDG A.C. BHAKTIVEDANTA SWAMI PRABHUPADA. He was the first & foremost person in the history of entire India & perhaps the world too who headed to West & spread the holy names everywhere & also showed the power of mantra by bringing everyone together.

Time to time, ISKCON organizes some social & spiritual events to bring the world at one platform without discrimination of caste, color, nationality & faiths. So, in continuation of the same tradition, Sri Sri Radha Madhav Temple (ISKCON ROHINI, DELHI, India) under the aegis of HG Keshav Murari Prabhu, temple President organized an ‘Interfaith Dialogue’ on 23rd Sept.19, 6pm onwards in the temple compound only. The chief aim of the program was to arrange a platform for elevated spiritual authorities of different faiths & cultures to share their views on the world peace & how humanity can grow spiritually & socially.

In all there were around 18 speakers from different faiths inclusive of ISKCON accompanied by app. 50 guests. 200 people on average attended the event relishing the snacks followed by sumptuous dinner. Print, as well as electronic media, covered the event. Speakers & guests were given Srimad Bhagwad Gita as it is, book on 50th anniversary of ISKCON, Sweet Prasad from Govinda’s & Participation Certificates at the end of the program.

HG Premanjana Prabhu from ISKCON Punjabi Bagh, Delhi, India was the host of the programme & very skillfully he invited the eminent speakers onto the dias to express themselves on their faith & culture. Premanjana Prabhu invited Mohd. Firoz Ahmed Naeemi, President, Ahmedia Muslim Society, Delhi first of all. Mr. Firoz told the audience that the exact meaning of Islam is peace & the holy book ‘Kuran’ calls for world peace. The real purpose of the human life is to love God & ultimately the entire humanity.

Next to speak was sister Lata from Prajapati Brahmkumaris. Through the narration of a story, sister Lata delineated that everyone has something to give & we should never spare any opportunity to gain from others. As per Brahmkumaris, the real aim of life is to understand the eternal soul. Dr. Jyotinder M Dave, Director, Swaminarayan Akshardham Temple explained the need to understand others as although all are sons of God yet have different perspectives & visions. Hence, we should not be envious of others. Mr. Lama Chosphel Zotpa being representative of Buddhists urged to respect all the religions & serve humanity. He praised the unique initiative of launching such a programme & stressed upon the need to spread it everywhere in the world.

Representing Sikh community, Mr. Sarvjeet Singh Virk, Member, Delhi Sikh Gurudwara Management Committee & Sardar Gaganjeet Singh from Gurudwara Nanak Piao, Delhi insisted on the need to follow God & scriptures in life rather than just believing in.They further said, “we are from God, God is not from us”. Always maintain mental hygiene along with physical one & live in harmony with others as in ‘Guru Granth Sahib’ too there have been mentioned total of 14 devotees out of whom 11 were Hindus & 4 were Muslims. Thereafter they emphasized the importance of SEWA. Any service done towards God lifts us from the material ground & brings us to the spiritual platform. Moreover, it binds us into the lotus feet of the almighty & thus helps to liberate us from the cycle of birth & death. Both of them also suggested to take such programmes in every nook & corner of the world so that common people could understand others & not fight with each other at least in the name of God or religion.

Mr. Zaved Khan, President, Ahsaas Peace Foundation looked a very simple guy but when opened his mouth, spellbound everyone. The main teaching he gave was ‘religions are for the people only, people must follow religions. He wanted such programmes to be supported politically and the people behind them must be awarded suitably. Then came Prof. Rattan from Delhi University, Jainism follower. Prof. explained not only about Jain philosophy but also talked about general issues. He said that their religion surrenders before philosophies not before persons specific. After a while only he praised the programme very much & called it as a replicate of Chicago programme of Swami Vivekanand, even something more than that. He also stressed that spiritual leaders should come together. Once they do so, followers’ll not go anywhere. A bomb which doesn’t cause destruction but spreads love & love only is the need of the hour. Moreover, scriptures should be studied & followed in the right spirit. He desired the dialogue to be continued in every village, town, street wherever it’s possible as there is a dire need of communal harmony in the present age.

Another Asst. Prof. Dr. Mohd. Ahmed Naeemi from Jamia Hamdard University, Delhi & Padam Shree awardee 2019, Dr. Mohd. Haneef Khan Shastry declared that God is one for sure. You can refer any holy book of any religion. What we need to do is just close our eyes & mind & follow his instructions blindly.

Among the last speakers, Mr. CL Gulati from Nirankari Mission also stressed upon the fact of following scriptures. Feel God everytime with you & see that all the evils would fall away.

Lastly, ISKCON leaders HH Bhakti Madhurya Govind Swami Maharaj, HG Sarvdik Prabhu, Sr. Prabhupada’s disciple, HG Rishi kumar Prabhu, Secretary, ISKCON DELHI & HG Rukmini Krishna Prabhu, Co-President, ISKCON Punjabi Bagh, Delhi delved into the significance of chanting the MAHAMANTRA & attaining the love of God. They all referred to several quotes from Srimad Bhagwad Gita, Srimad Bhagwatam, Chaitanya Charitamrita & Prabhupada Lilamrita & stressed & proved that chanting the holy names is the only way & there is no other way in the age of ‘kali’. Srila Prabhupada used to meet people of different faiths & cultures too. He never criticised anyone rather requested them all to love your God. Loving God is the essence of all religions.

Finally, the programme came to a successful end with a group photograph of spiritual leaders of different faiths & cultures with a vow to maintain the same spirit in the future too.

Walking With Purpose—Bhaktimarga Swami, known as the Walking Monk, passes through Amador