The Source of My Good Fortune 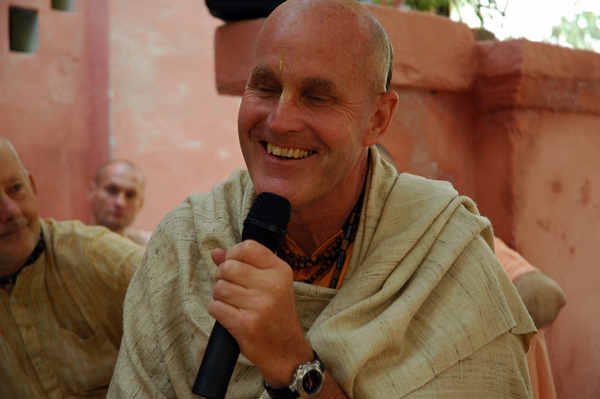 Please accept my most humble obeisances in the dust of your lotus feet.

My beloved spiritual master, today we gather in the holy dhama of Sri Vrindavan to observe your tiro-bhava mahotsava, your departure-day festival. The temple has been nicely decorated, the deities are dressed with beautiful clothes and ornaments, and the atmosphere is electric with a festive mood.

It is a scene of great joy, but within my heart there is little to celebrate. Your departure was, and still is, the most devastating event in my life. I was an infant in spiritual life, fully dependent on you as my spiritual father, and I missed you dearly after you left. It is said that time heals all wounds, but this adage does not apply in devotional service. The pain of separation from you has only increased through the years because of our transcendental relationship as guru and disciple.

My solace is that these feelings of separation, along with lifetimes of service to your mission of reclaiming the fallen souls, may one day grant me the privilege of being with you again.

Is it not ironic, my beloved lord and master, that the cause of our grief on the day you left, thirty-two years ago, was a source of great joy and happiness for the residents of the spiritual world?

Oh what festivities must have taken place upon your arrival! You, the chosen son, victorious in every way, having fulfilled the order of guru and Gauranga, were surely received in great glory. Or did providence arrange that your own glorious master, Sri Srimad Bhaktisiddhanta Saraswati, in his eternal form as Nayana-mani manjari, met you, and took you by the hand to a secluded place in the forest to be alone with Krsna?

Such things are not for us to speculate on, but once, in a moment of intimacy, you told a loving disciple about the possibility of such a meeting with the spiritual master upon returning back to Godhead. Surely this homecoming was your right, for you had fulfilled the orders of guru and Gauranga above and beyond the call of duty, perhaps more than any other acarya in the history of the human race.

Armed only with the order of your spiritual master and full faith in the holy names of the Lord, you left India at an advanced age, and you challenged the very basis of Western culture while living in New York, the stronghold of the age of Kali. You uprooted the ideas of voidism and impersonalism with your strong preaching, and you shook to the core the values of materialism in the lives of all people you met. You started a spiritual revolution that continues on to the present day.

I am only a simple soul, limited by time and space. I cannot appreciate the greater picture of your success and the impact it will have on future generations all over the world. But by serving your mission in my own humble way, I often see the astounding results of your work in the hearts and souls of the people you came to save.

The other day, I was in the holy tirtha of Sri Rangam in South India, chanting my rounds in the early hours of the morning when an elderly man called to me from the window of his home.

“Excuse me, sir!” he called out. “Please wait! I desperately need to ask you something!”

He paused to catch his breath.

“Is it true?” he burst out. “Is it true that Vedic culture has spread all over the world by the efforts of Bhaktivedanta Swami?”

“And is it true that because of him many people in foreign countries are reading the Bhagavad Gita, the Bhagavat Purana, and the Upanishads in their own languages?”

A surge of pride welled up in me, and my eyes filled with tears. “Yes, sir,” I said. “That is all happening because of my glorious master, Srila Prabhupada.”

He looked at my dress and demeanor. “Are there many more like you?” he said.

He pointed to my bead bag. “Russians?” he said. “Russians are chanting on beads like you?”

He shook his head. “Then truly the world is indebted to Bhaktivedanta Swami,” he said. “Thank you so much.”

Srila Prabhupada, later that afternoon I went with some devotees to visit an ancient temple of Lord Siva outside of Sri Rangam. As we walked through the temple with it’s hundreds of carved stone pillars, we came upon a small old man the size of a dwarf.

He was a sadhu. He wore old rudraksa beads around his neck, and his forehead and body were marked with the three-lined tilaka of a Siva worshiper.

He seemed surprised to see Westerners dressed as sadhus. “You are obviously not from India,” he said to me. “What country do you come from, and why are you dressed like this?”

“I am a disciple of Srila A. C. Bhaktivedanta Swami Prabhupada,” I said. “He was the great spiritual teacher from India who brought Vedic culture to the West over forty years ago. He initiated thousands of disciples who now carry on his work after his departure.”

He studied us carefully. “I am curious,” he said. “Can you sit with me and tell me more?”

A priest walking by saw us. “This elderly man is the chief priest in our temple,” he said. “He’s seventy years of age.”

I turned to the head priest. “Then yes of course,” I said. “Let us speak.”

Dear Srila Prabhupada, as we sat, I answered his questions and explained how you had transplanted the spiritual culture of India in the West. When I spoke of the hardships you had undergone in preaching, he seemed deeply moved. After some time he took my hand. “Come with me,” he said.

He led me to an isolated part of the temple. We entered a small dark room, lit only by two or three ghee lamps. As my eyes adjusted to the dim light, I noticed an old Siva lingam in the center of the room, with sandalwood and red flowers still fresh from the morning offering.

We sat down, and the old priest pointed to the rudraksa beads around his neck. “These beads were given to me by my father when I was seven years old,” he said. “I have never once taken them off. They contain the fruit of all my penances and austerities, the results of all my prayers, and all my spiritual strength and power.

He paused. Then he slowly took off the rudraksa beads and carefully placed them around my neck.

“I’m giving them to you,” he said, “so you will have the power to continue the work of your glorious master.”

Then he broke down crying.

I sat there stunned, trying to fathom the mercy I had just received. It was obvious that he was honoring you, Srila Prabhupada, and I was simply accepting the gift on your behalf. As always, you alone are the source of my good fortune, in this life and the next.

My prayer is that I may use that sadhu’s blessings, the fruit of all his penances and austerities, the results of all his prayers and offerings, and whatever spiritual strength and power those beads may hold to serve your mission throughout my life.

The next day I visited a priest from the Sri Rangam temple, Murali Bhatta. He is a direct descendent of the great devotee Venkata Bhatta, and he lives in the house where Lord Caitanya stayed during His visit to Sri Rangam five hundred years ago.

He gave me a salagrama sila that had been worshiped in his family since the time Mahaprabhu stayed with them. And he made it clear that it was in appreciation of ISKCON and the great work you did in spreading Krsna consciousness all over the world.

Srila Prabhupada, I realize that such gifts and the many other fruits that come from serving you are things that even the demigods in heaven can only dream of. Thus, despite whatever difficulties I may encounter in following your order to preach all over the world, I want to say that I am fully satisfied and happy. I have no lamentation, no doubts, no grievances, no complaints, and no other desire than to share with others the good fortune I have inherited from you.

If providence grants me a long life then I will be happy to use every single moment in preaching for you. And I pray that whenever this life ends I may join you in your eternal service to the lotus feet of the Lord in the spiritual sky.

Perhaps, just perhaps, I too will find my beloved spiritual master waiting for me at the gates of the spiritual world, ready to introduce his servant to his beloved Lord. At that time it will be my greatest pleasure to share with you more stories of how your mercy continues to touch the hearts of so many fallen souls within this material world. I know beyond a doubt that the success of your mission in this world pleases you as much as your service in Goloka.