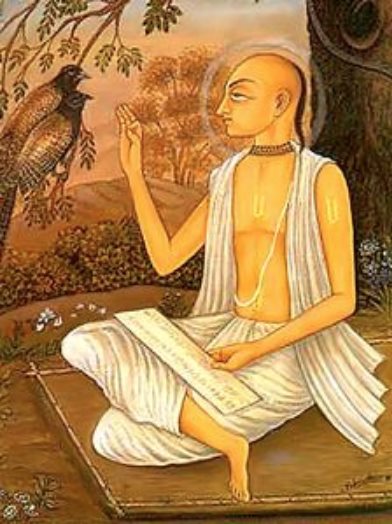 Every day, Raghunath Bhatta would sing the verses of the Bhagavatam to the Vrindavan residents, and his tears of spiritual emotion would wet the pages of the Bhagavatam as he sang. Raghunatha Bhatta Goswami never criticized anyone. He believed that all Vaishnavas are sincerely serving Krishna according to their realization and therefore one should overlook their faults. Under his inspiration, a wealthy disciple built the temple for the Radha-Govinda Deities in Vrindavan.

tanra sthane rupa-gosañi sunena bhagavata
prabhura krpaya tenho krsna-preme matta
Synonyms:
tanra sthane — in his place; rupa–gosañi — Srila Rupa Gosvami; sunena — heard; bhagavata — the recitation of Srimad-Bhagavatam; prabhura krpaya — by the mercy of Lord Caitanya; tenho — he; krsna–preme — in love of Krsna; matta — always maddened.
Translation:
While he stayed with Srila Rupa Gosvam i, his engagement was to recite Srimad-Bhagavatam for him to hear. As a result of this Bhagavatam recitation, he attained perfectional love of Krsna, by which he remained always maddened.
Purport: