Photos from the 2019 Glastonbury Ratha Yatra 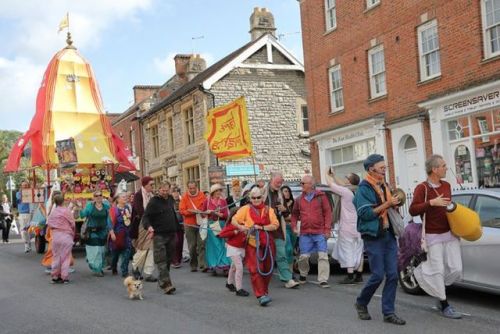 Photos from the 2019 Glastonbury Ratha Yatra.
Please find below the links for HR photos from the 2019 Glastonbury Ratha Yatra.
Slideshow:
http://davidc.zenfolio.com/glastonbury_ratha_yatra_2019/slideshow
Gallery:
http://davidc.zenfolio.com/glastonbury_ratha_yatra_2019
Bhakta David: Glastonbury has long been a place of pilgrimage for spiritual seekers and the nearby famous music festival is also named after the town.

2019 saw the 27th Glastonbury Ratha Yatra. Devotees pulled the Ratha of Jagannath, Baladeva and Subhadra along the High Street to the Abbey ruins where the tomb of King Arthur is said to be. Pausing in the car park, members of the public joined in with the ecstatic chanting and dancing. The procession then continued on with the devotees pushing the chariot upwards and past the Chalice Well to the bottom of the footpath up to the Tor, believed to be the mythological Isle of Avalon.

In previous years Gaura-Nitai have been taken to the top of the Tor and kirtan held at St Michael’s Tower, but with many senior devotees present it was left to a few devotees to make the climb in the ferocious wind while the Deities returned to the town and the Assembly Rooms where a full programme was held.

There the Hare Krishna Festivals team filled the hall with the Holy Names before Srila Prabhupada disciple Saksi Gopal Dasa gave a talk about the history of the Ratha Yatra festival. Further kirtan was held and a sumptuous vegetarian feast was served to all present