Peter Leggieri, the editor-owner of “The East Village Other” (EVO) who wrote the first ever article about Hare Krishna “Save Earth Now” 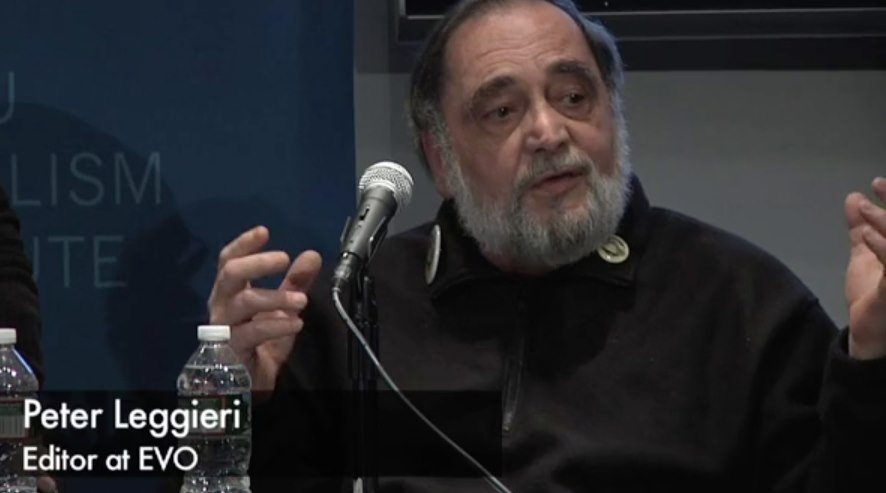 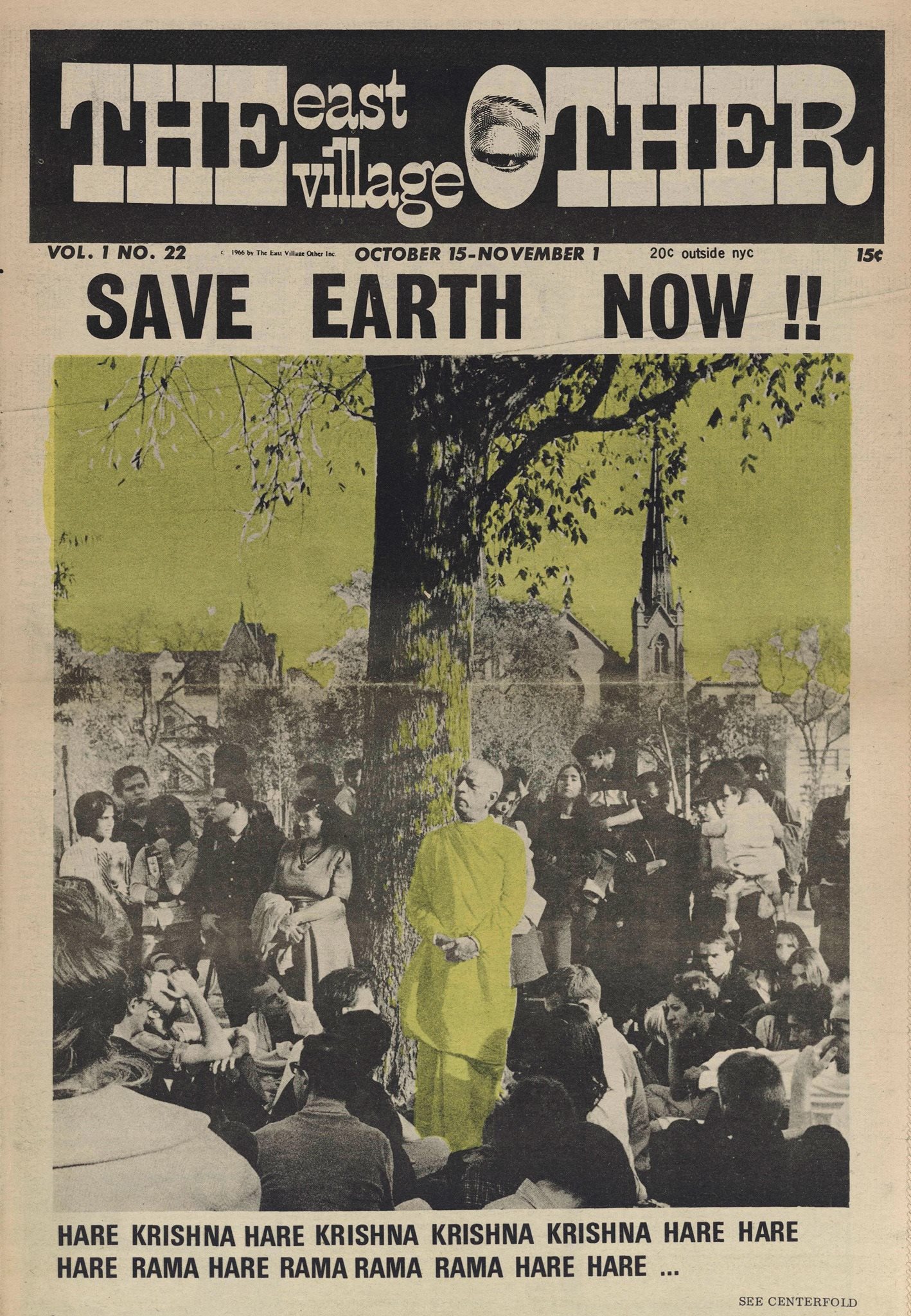 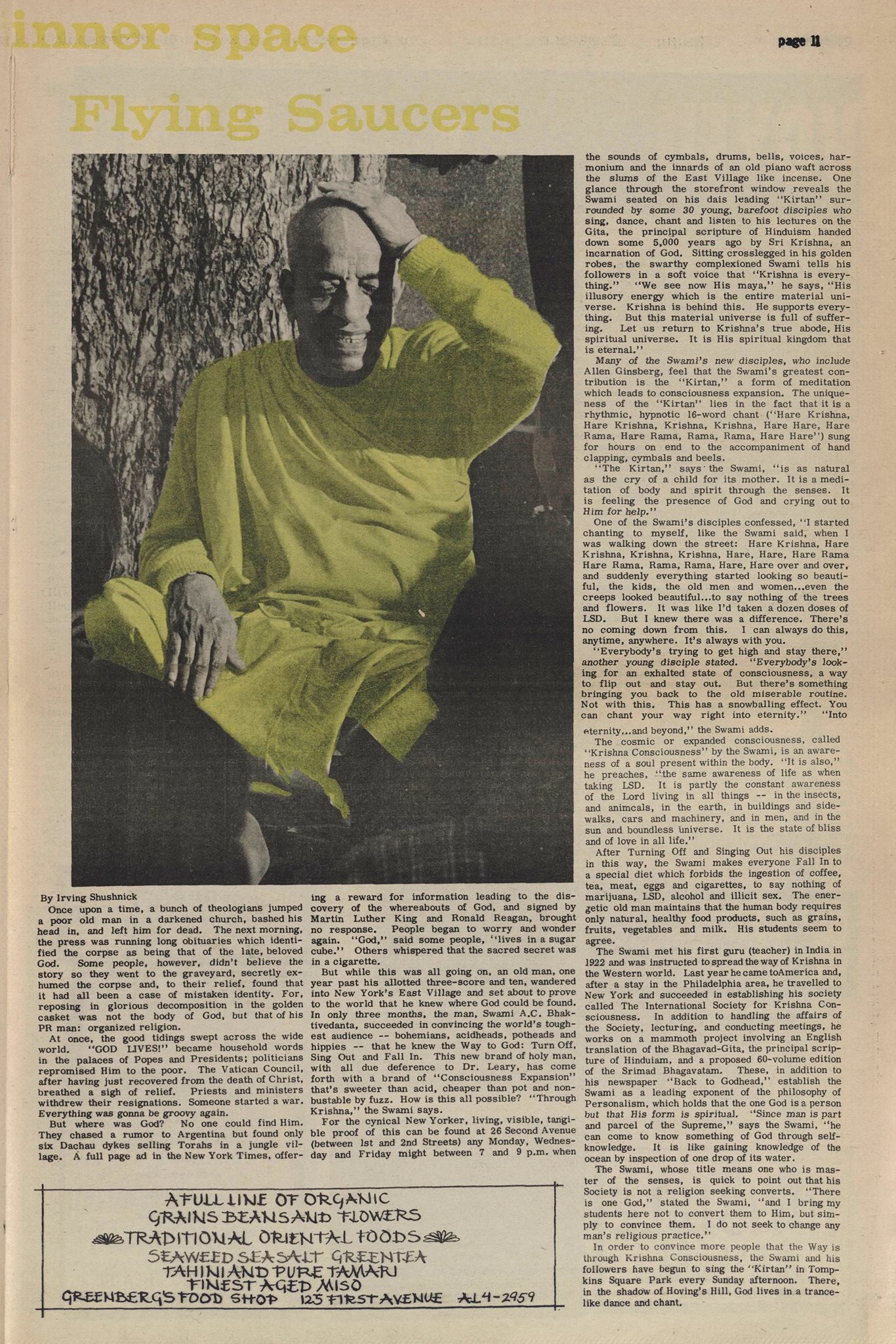 Peter Leggieri, the editor-owner of “The East Village Other” (EVO), wrote the “Save Earth Now” article about the Hare Krishna movement in 1966 under the pen name Irving Shushnick. Here’s an excerpt from the EVO website where he mentions how that article came to be.

“I was the anonymous Other, the one editor-owner unknown to the public. I did not party. I did not schmooze with the literati or seek publicity. I had no time for such things. I worked seven days a week, 20 hours a day and, because of law school, I had to be sober. My friend, the poet John Godfrey, told me that I was afflicted with a Zen curse: a hermit condemned to be surrounded by people and events. That was certainly the case for me in the 1960s.

The Swami: EVO seemed to turn everyone who worked there into a writer or an artist or both. I was no exception and was soon pressed into service creating visuals and writing stories (always using the in-house nom de plume, Irving Shushnick, invented by Allen Katzman). One day, Bowart took an acid trip and strolled into Tompkins Square Park where he saw a new East Villager, the Hare Krishna leader Bhaktivedanta Swami Prabhupada, dressed in golden robes and sitting in a lotus position under the giant tree that now bears his name. Bowart hurried back to the office in a “STOP THE PRESSES” fit, and began insisting that we immediately do a story about the “holy man” he had seen.

When Katzman pointed out that everyone was already working on an assignment, John Wilcock interjected, “Peter, you’re the only one with any theology. You do it.” I refused by pointing out that I was extremely busy and knew nothing about swamis. The three of them ganged up on me and, very reluctantly, I went off to meet the holy man. I did not like what I wrote and pleaded for time to do a rewrite. The three editors turned me down and the story went to press.

It wasn’t until some 35 years later that I learned the article is magnificently reproduced in the Hare Krishna’s main temple in India. The cover story was transformed into a life-size diorama that includes Walter Bredel’s photos. Apparently, Bhaktivedanta Swami Prabhupada always credited EVO for the great success of his ministry in this world. To the best of my knowledge, The East Village Other is the only newspaper in the history of newspapers to be enshrined in a religious temple.”

We should acknowledge with gratitude those who have helped the movement, knowingly or unknowingly, such as this fine gentleman, Peter Leggieri, whom nobody in the Hare Krishna movement knows (perhaps because we never thought to inquire), but who rendered Srila Prabhupada and our movement a huge service in the pioneer days. He’s still alive, lives near Tompkin’s Square Park, and wouldn’t it be fabulous if, for example, he were to receive a thank-you package of Maha-prasadam sweets, deity garlands, and letters of appreciation from devotees around the world at his doorstep, 53 years later?

This first newspaper article ever published about the fledgling Hare Krishna movement in the West, in 1966 is now available in high resolution digital at The East Village Other’s archives. The reporter, Peter Leggieri, editor-owner of EVO, under the pen name Irving Shushnick, did a really good job writing this article, all things considered. (Page 11 centerfold) Have a read: https://is.gd/vt3a56

The Appearance of Lord Krishna

Listen, do you wanna know a secret…