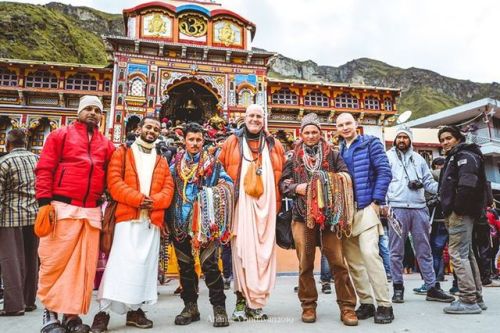 Badrinath – A Destination Supreme (Album of photos)
Indradyumna Swami: Badrinath is famous as one of the larger Char Dhamas of India: They are Ramesvaram, Jagannath Puri, Dwarka and Badrinath. Situated high in the Himalayas on the banks of the Alakananda river Badrinath has been visited by great saintly persons since time immemorial. The deity in the temple is self-manifested from a salagram sila and is two feet high. During the winter when it becomes unbearably cold, the temple is closed for 6 months. Before closing the doors the pujaris light a ghee lamp which is found to be still burning when they open the doors 6 months later. It is understood that Narada Muni and various demigods perform the worship during those cold winter months. Nearby is the cave where Srila Vyasadeva wrote down the Vedic scriptures. The border of China is only a few meters away.
Find them here: http://bit.ly/2OzcyiJ