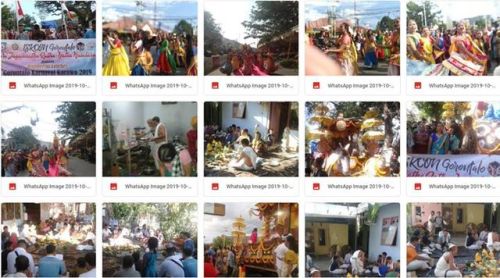 Gorontalo is a province of Indonesia in the island of Sulawesi. With a predominate Muslim population the city has been given the title, ‘Porch of Medina.’ This is because the kingdoms of Gorontalo have applied Islamic law as a basis for implementing the law, both in the fields of government and society. The total population of Gorontalo is just over a million. In Gorontalo there is only one preaching centre under ISKCON named ‘Bhakti Yoga,’ it is headed by Sandrananda das, a disciple of HH Subhag Swami.
Although preaching Krishna Consciousness is extremely difficult in this remote part of the world, the sincere prayer of the devotees ensures the mercy of the Supreme Lord. The annual city parade, Karawa Carnival was held on the 6th of October 2019. By the divine arrangement of Lord Jagannath the devotees were invited to participate in this event and able to hold a Ratha Yatra festival. This year the carnival was held over a period of 5 days and 32 participants came from different parts of Indonesia.
‘The sufferings of humanity are due to forgetfulness of Krishna as the supreme enjoyer, the supreme proprietor and the supreme friend. Therefore, to act to revive this consciousness within the entire human society is the highest welfare work.’
Devotees from across the island of Sulawesi gathered in Gorontalo a few days before the event to help with the preparations. The chariot team constructed the chariot in only 10 days. It was 6 metres in length and just over 2 metres wide. It was made from wood and had traditional Balinese decorations engraved on. A team of matajis helped to decorate the chariot with bright orange marigolds.
‘To implement this transcendental bliss to the people of your country there is immense work to be done ahead and this Ratha-yatra festival is only a bit of sample. If we get opportunity we shall be able to overflood your country with the waves of transcendental bliss, by the grace of Krsna.’
On the day of the event there was a yajna performed in order to invoke auspiciousness. Following this the chariot was brought to the carnival parade starting point. An arati ceremony was performed to Lord Jagannath and coconuts were broken to ensure all shortcomings would be dispelled.103 devotees gathered from various places across Indonesia, mostly from Sulawesi accompanied Lord Jagannath in the Ratha Yatra festival and to the devotees surprise 40 Muslim locals also accompanied the Ratha for the entire 2 hours. Ecstatic kirtan was led throughout the parade with many onlookers amazed. Prabhupada’s books were distributed throughout the event.
More photos: https://is.gd/7OuU7A

A Society Without Envy
The mid-term GBC meetings, in Tirupati in India (Album of...
Tagged under: Nectar