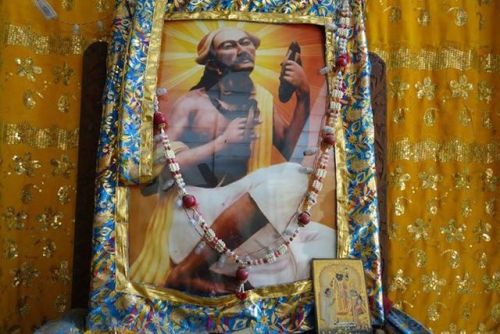 We often tell the recent story of Narsinh Mehta. He was a dear devotee of Krishna, krishna-premi-bhakta, always thinking of Krishna. He never thought of anything else. Narsinh Mehta was a very poor Brahmin. He had a family, wife and children – so many daughters. Having no wealth, he was going out and begging alms. He led a poor life, just barely maintaining himself and his family.

A Krishna-premi-bhakta like Narsinh Mehta always thinks of Krishna. He reads Bhagavad-Gita and Srimad-Bhagavatam. He does sravanam-kirtanam; he hears Krishna-katha; he speaks and preaches. He is very, very attached to Krishna. He has no other business. He never thinks about how to maintain his family because he only thinks of Krishna. This is ananyas cintayanto mam – “always concentrating on Me”. He has full faith in Krishna’s words: yoga-ksemam vahamy aham – “I protect and preserve such devotees.” His daughter attained marriageable age, but he wasn’t thinking about how to get her married. This is the responsibility of the father, but Narsinh Mehta was only thinking of Krishna.

His wife heard the neighbours criticizing, saying, “His daughter has already attained marriageable age, but he is not getting her married. He is keeping a grown-up daughter.” People were speaking in this way. But Narsinh Mehta never heard it because he was always thinking of Krishna. He was only hearing Krishna-katha, so none of those things entered his ears. If your mind is always engaged in hearing Krishna-katha and thinking of Krishna then none of these material sounds will come to you. But his wife heard them, and then his wife said to him, “Hey! What are you doing? Aren’t you thinking about getting your daughter married? This is your responsibility!” Narsinh Mehta said: “Why are you creating a disturbance and bothering me in my bhajan? Krishna has said in Bhagavad-Gita 9.22:

‘Those who always worship me with exclusive devotion, meditating on my transcendental form, to them I carry what they lack and preserve what they have.’

Have you no faith in Krishna’s words? Krishna says, ‘I take up the responsibility to maintain my devotee’s family and to provide him whatever he lacks.’ We now have this need, how the marriage will be done. Marriage means that a huge amount of money is required. Krishna has said that he will carry the burden. It is Krishna’s family. I am completely surrendered. I’ve given everything to Krishna. So why are you disturbing me?”

But his wife had no faith. “Oh? Krishna will bring money to your home and make an arrangement for your daughter’s marriage? No! You have to go out and search for a proper bridegroom. Krishna may help you, but if you don’t do anything, if you just sit here in the house reading the Gita and Bhagavatam, doing bhajan, what will Krishna do?” In this way his wife created disturbances in his bhajan such that he felt so much pain. “Oh, this silly woman is creating so many disturbances. I cannot do my bhajan. I can’t sit here. I cannot do bhajan.”

Then he began to cry before Krishna, “O Gopinath! There is a problem now in your family. Our daughter has already attained marriageable age. She should be married. Why are you not making some arrangement?” Srila Bhaktivinoda Thakura has sung:

“I’m only thinking of your service. I have no other thought. O Krishna, this is your home, your family. If anything is wrong with it, then You will be criticized. Why shall I be criticized?” [Sarangati 3.2.7]

A devotee never says “my family”. It is Krishna’s family. Then it is Krishna’s responsibility to maintain it. So Narsinh Mehta cried and offered prayers. When the bhakta cries, Krishna responds. You have to cry. Those who have cried, they have gotten Krishna. Dhruva cried, he got. Bilvamangala cried, he got. Unless you cry, Krishna will never hear you. If you cry, immediate response is there. Narsinh Mehta cried, and the Lord immediately responded.

The next day, some gentlemen came who were searching for a bride. They came to Narsinh Mehta’s house and saw the daughter. “Yes, we appreciate this girl. We would like to take her for marriage to our son.” After some negotiation, the marriage was fixed. Krishna can do and undo things in a moment. “When will the marriage take place?” They checked the calendar to find a vivaha-tithi, a day for the marriage to take place. They saw that in this year there was only one proper time, and it would come after just four days. Otherwise it will have to wait for another year. So that day was fixed. “Yes, after four days the marriage will take place.” Narsinh Mehta was very happy. He said to his wife, “You see how Krishna took care?” Then his wife said, “Alright, the marriage will take place after four days. So how will it be done? A huge amount of money is required, lakhs of rupees. You have no money. You are a poor man, without a single coin. How can you perform the marriage?”

“Krishna will take care.”; “Oh, Krishna will take care?”; “Yes, Krishna has said in the Gita, yoga-ksemam vahamy aham – ‘I will provide for my devotee.” He had unflinching faith in Krishna, but his wife had little or no faith, soft faith, komala-sraddha. So she again created disturbances in his bhajan. He could not sit and peacefully worship the Lord. She said, “You should go out and borrow some money. Otherwise how can you perform this ceremony in four days from now? Lakhs of rupees are needed! You will have to give saris and ornaments to your daughter. You will have to arrange a big feast; feed all your friends, relatives and neighbours. The bridegroom will come with a big procession, and you have to pay for it. He’ll demand some dowry. You have to give it.” This is social prestige, social custom. “Krishna will carry. I am a poor man. Who will give me money? If I go and approach a wealthy man, ‘Please give me some money. I want to take a loan,’ he’ll never give money because I have no wealth to pay it back. What shall I do?” The wife said, “Here! Take some of my ornaments.” In villages in India the women’s bangles, earrings, silver and gold ornaments are their bank. At the time of need they will sell them or put them somewhere as collateral, get money, and perform these ceremonies. So she gave them. “Alright, take these. Put them somewhere with some wealthy man and get some money.” So he took them and went out.

Narsinh Mehta was a premi-bhakta, very fond of Srimad-Bhagavatam and Krishna-katha. When he went out in search of someone to lend him money, he entered a village where he saw that a Bhagavata recitation was going on for seven continuous days. Being very attached to hearing the Bhagavatam, he sat there for 7 days. He forgot that he had come to get money to perform his daughter’s marriage, which would take place after four days. When the 7 days finished, he asked someone, “Oh bhai, what day is today? Alas! Everything must have finished, 7 days have gone by. The marriage of my daughter was after four days. I came to get some money. My wife gave me these ornaments. What has happened to the marriage ceremony? Everything must have been spoiled! There will be so much criticism! How can I go back? How can I show my face there? If I go there my wife will beat me with a broomstick! Oh Krishna, why did you keep me here, making me completely forget? What is your lila, I cannot understand! This is your family. You will be criticized.”

He thought, “What shall I do? I’ll tell a lie to my wife. ‘I went to a very far off place. I went to many villages and met many wealthy persons. No one was prepared to take these ornaments and give me money. I went to such a far off place, so returning took time.” He was thinking like that. As he was coming he was chanting and thinking of Krishna. “Alright Krishna, such a wonderful lila you are doing. Why you made me forget, I don’t know. You know everything.” As he came nearer to his village he heard people talking about the marriage. “Such a marriage! Narsinh Mehta’s daughter’s marriage was like a king’s. We have never seen such a marriage! We have heard that great kings do like that, but for the first time we saw such pomp and ceremony. Such a grand feast we had never eaten before, such palatable dishes, and such a grand procession like a royal procession. And he gave so much dowry, so many ornaments. Where did he get the money? This was like a king’s royal marriage.”

Hearing these talks, Narsinh Mehta asked, “Whose marriage?”; “Your daughter’s marriage.”; “My daughter’s marriage is already done?” “Oh yes. With such pomp and ceremony, like a king’s royal marriage. We have never seen!”; “Oh Krishna! You are so merciful! Yogaksemam vahamy aham – You have said, ‘I will provide for my devotee.” Then he came to his house and saw that his wife was very happy. He asked, “The marriage was done nicely?”; “Yes, very nicely!”; “How was it performed? Who brought money? You were in anxiety, always creating disturbance in my bhajan. You had no faith in Krishna’s words, yoga-ksemam vahamy aham. Who brought money? How was it done?”; “A ten or eleven-year-old black boy came. He was carrying a heavy load. He brought so much ghee, oil, subji, rice, dal, flour, sugar, and molasses. He brought so many saris, clothes, ornaments, and money. We had no place to put everything in our small mud hut. I asked him, ‘Hey, where are you bringing these from?’; “He said, ‘Oh, gosai is sending.’ You are sending, he said. You are sending. He was carrying such a heavy load.”; “Krishna has said, ‘I will carry – yoga-ksemam vahamy aham.’ You have no faith in the words of Krishna?”

This is a true story. A pure devotee of Krishna is completely, exclusively, dependent on the mercy of Krishna. Every moment he only thinks of Krishna, with no other thought. He is completely surrendered, and has dedicated everything to the Lord. His attitude is that it is Krishna’s family. The only means for a householder devotee is complete surrender. Enter Krishna’s family – Krishna-samsara. Don’t stay in maya-samsara. Krishna is the only the object of love. Develop love and attachment to Krishna. Give up material, temporary bodily attachments. They are all troublesome like thorns and pointed pebbles. Krishna is the only object of loving attachment. Dedicate your family and everything to Krishna. It is Krishna’s family. Only think of Krishna and Krishna will make all arrangements. If you develop your love for Krishna then everything will be very good. If the husband and wife relationship is based on loving relationship with Krishna, then it is a real relationship. Don’t develop bodily, material relationships. They are only temporary, troublesome, and based on misery. Develop your eternal loving relationship with Krishna, wherein the husband is Krishna-dasa and the wife is Krishna-dasi.

Kartika and Sarat-purnima: Special Mercy and the Dance of Divine Love
Advent of Kali Yuga
Tagged under: Nectar