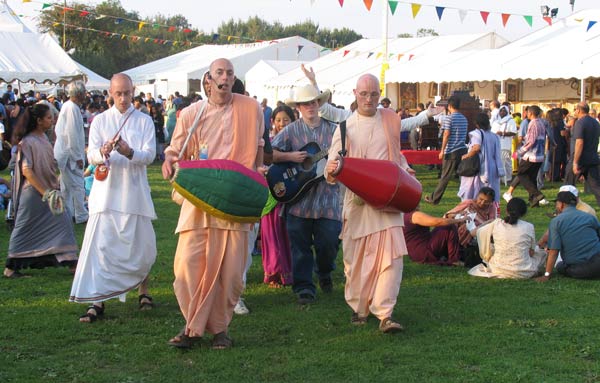 A human chain of thousands will hold hands at the stroke of midnight on Wednesday 16th August to pray for victims of war and chant a peace mantra at the largest gathering of its kind in Britain. The Annual Janmastami festival at Bhaktivedanta Manor ISKCON temple at Watford, which attracts 75,000 people over two days commemorates the 5000 year festival of the birth of Lord Krishna.

The festival which will be celebrated through the days of 16th and 20th August will provide a colourful taste of mystic India with live stage shows, colourful costumes, enchanting music, mediation and exotic food set in a picturesque setting with a lake and an ancient forest.

“As the world watches the violence in the Middle East, we want to remind everyone of the simple message of Love at this Krishna Janmastami Festival. The prayer for peace and the human chain will express this in a powerful way to help repair the global bonds of trust and love that have been strained this year.”

Bhaktivedanta Manor is one of the largest Temples in Europe and preparations for Janmastami began over six months ago, supported by over 1,300 volunteers. Over 200 volunteers have been gathering every day for the month preceding the festival to set the marquees, practice the plays and dances, create the costumes and decorate the grounds.

A particular highlight this year will be a specially constructed walkway with a flowered pergola through spiritual gardens. Using the forest and lake as a breathtaking backdrop, the story of Lord Krishna’s birth will be depicted by way of large dioramas.

The festival draws pilgrims from all over UK and attracts many Ministers, MPs, diplomats, business leaders, faith representatives and other dignitaries, as well as messages of support from the leaders of the three main political parties.

The Manor is nestled in 77 acres of beautiful countryside outside Watford and hosts the largest Hindu festivals in the UK.
It has become one of the most important sites of pilgrimage and has a high standard of courses, workshops, civic marriages, cow protection, worship and a monastic facility.
Editors are referred to the separate media pack which includes more information about Bhaktivedanta Manor and its activities. It also contains copyright free photographs.

The Founder of ISKCON, His Divine Grace A C Bhaktivedanta Swami Prabhupada had travelled at the age of 70 from India to the west, built over 100 temples, initiated over 10,000 disciples and started a movement which has reached millions of people worldwide and re-established the ancient teachings of India for people of all denominations and nationalities.
His translation of the Bhagavad-gita, held sacred by one billion Hindus worldwide, is the most widely distributed and read edition in the world.

Janmastami is the popular name for the festival held to celebrate the birth of Lord Krishna. This festival is celebrated throughout India. People mark this occasion by decorating their homes and temples with symbols depicting the life of Krishna. Special sweets are prepared in honour of Lord Krishna and children dress up to resemble the boy child, Krishna. Miniature cribs containing images of the baby Krishna are also a major feature of Janmastami.

The ceremony of Janmastami involves priests chanting holy mantras and sprinkling the Deity of Krishna with charanamrit (holy water from the River Ganges) and anointing the Krishna Deity with milk, ghee (clarified butter) or honey.
Conch shells sound at midnight which is the precise moment of the birth of Lord Krishna. At this time the worshippers break their fast and the feasting begins.

4. Story of the Birth of Lord Krishna

According to scriptural accounts, Lord Krishna, the eighth son of Vasudeva (father) and Devaki (mother), was born in the sacred city of Mathura, in northern India. Devaki was sister to the ruling monarch of that time, a tyrannical despot named King Kamsa. Prophets had predicted that the eighth son of Devaki would one day kill King Kamsa, thus freeing his subjects from his tyrannical reign of terror. Taking the prophecy to heart, the evil king decided to imprison Krishna’s parents, murdering each child at birth until the arrival of Krishna.

Krishna ‘s birth was surrounded by auspicious omens. By divine intervention, Vasudeva his father somehow managed to sneak the newborn baby out of the prison and past the prison guards who were asleep. Krishna was taken to a friend’s house and raised by local villagers in idyllic, rural surroundings. Krishna eventually left his rural lifestyle and fulfilled the prophecy by slaying the cruel king, Kamsa.

5. Messages of Support from the Leaders of the main political parties.

I understand that the Janmastami festival at the ISKCON Bhaktivedanta Manor Temple is likely, once again, to be the largest such gathering outside India. My congratulations to the organisers and everyone else involved in this successful event.

Message from the Leader of the Opposition, the Rt Hon. David Cameron MP: (selected quote)

I know that the birth of Lord Krishna is celebrated with devotion by Hindus across the country, and that the celebrations at Bhaktivedanta Manor are some of the largest and most colourful outside India.

I am delighted that the Hindu community will be celebrating the festival of Janmastami in August. This is an important event relating to Lord Krishna who is worshipped as God by over one billion Hindus in the world.