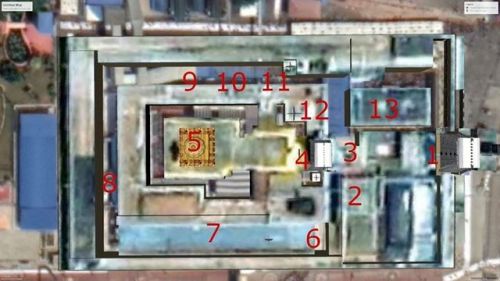 A very special darshan of merciful Balaji! How it happened.
Bhakti Chaitanya Swami: Two days ago we visited the main temple of Balaji on top of the Tirumala Hill at Tirupati. The local devotees arranged very special darsana for us, so we were able to come right before Balaji, about 3 meters from Him, and stay there for about a minute, and in that way savor the amazing experience of being in His presence.

One enters through the main gates, on the right side in our satellite image. One then passes through a corridor, past Ananta Alvar’s metal rod, hanging up on the right wall, and then into a courtyard on the left side of which is a small open hall in which they keep different types of palanquins, staffs and other ornamental items used in festivals. A few meters past this, in the center of the courtyard is the Garuda Stambha, a large pillar completely covered in sheets of gold. One then enters the temple building proper, over a slightly raised platform, and then one can see, in the distant darkness, Balaji Himself.

Balaji is about two meters tall. He was wearing a pinkish red dhoti with a green and gold border. On His head was a dark gold helmet, partially encrusted with what appeared to be diamonds. Slightly above His head, and to our right and left respectively were a solid gold, completely diamond encrusted Sudarsana cakra and conch shell. Each one about 25 cms across.

His upper arms hang directly down. Just under each elbow were two Deities of Ananta Sesa, the many headed serpent form of the Supreme Lord, also in solid gold. Then His right hand was in a blessing mudra, with gold and diamond encrusted glove completely covering it. His left hand also had a gold and gem covered glove, but was hanging slightly across in fton of His, and down.

One His head was a big white tilaka, more or less completely covering His eyes, so He doesn’t have to see sinful people when they approach Him. This tilaka was at least two centimeters thick, and about three centimeters wide. On His chin was a large patch of white ointment, covering the wound made by the metal rod thrown at Him by Ananta Alvar, which struck Him there, on the chin.

The atmosphere is always one of amazing seriousness, awe and reverence, and to get the opportunity to observe Him like this is surely one of the greatest mercies available to a devotee.

After darsana we went back out the main door, stopping from time to time to look back at Balaji. We turned right and then went outside, and into the main kitchen of the temple, straight across from that entrance into the temple building. If one goes inside to the left, and then turns left again, one sees a Deity of Vakula, who is the mother of Balaji, and is an incarnation of Mother Yasoda. If one then turns around to the right and follows the wall, one comes to an altar of Visvaksena with Angada and one other devotee on his right and left.

Then following the wall to the right again one comes to the cages in which they count the donation box collections every day. When we were there it was early morning, and they were just dragging out sacks of money for counting.

One then follows the wall to the right, where there is a special darsana place for seeing the vimana of Balaji, which is part of the large gold dome over the Deity altar. The vimana, or airplane, or Balaji can be distinguished from the rest of the dome in that it a gray/silver coloured frame around it. It is about one third of the way up that side of the dome, a little to the right of center.

Just after that is the small samadhi or memorial of Ramanujacarya. After that is the room in which Balaji’s clothes are kept, where normally one can go in and have the scented cloths rubbed all over one’s face and head, although this time it was closed. Shortly after that, and in a separate little room by the courtyard, is a temple of Yoga Nrsinga, sitting in a cross legged position. Nowadays there are many people milling around even at this early hour, but when we first went there about 30 years ago there was no one, and we sat there and chanted japa for an hour or so on a number of occasions.

Then one can get maha prasädam and sit down and relish it, and after that head back outside.

Modernization Without Westernization – Reflections on the Middle…

The All India Padayatra Receives A Grand Welcome In Nileshwaram,…