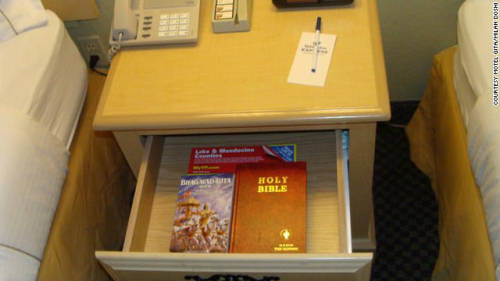 MotelGita (Album of photos)
More and more motel owners welcome Gita in their motels!
MotelGita article is featured in Back to Godhead Magazine!

CNN–It’s about to get crowded in your hotel room nightstand. The newest addition could soon be a sacred Hindu text called the Bhagavad-Gita.

The Bhagavad-Gita is literally translated as “song of God” and is a discussion between Lord Krishna and his student, Arjuna, on revealing one’s spiritual identity and a relationship with God, says Vaisesika Dasa, founder and president of the Motel Gita project, the group behind the effort.

Motel Gita, with the help of a Hindu nonprofit, has distributed approximately 150,000 copies of the Bhagavad-Gita to 1,100 hotels and motels. Dasa said their goal is to place at least 1 million books to, “provide solace to traveling souls by giving them spiritual knowledge.”

The idea for the project came to Dasa after seeing the positive effect the Bible has had on hotel guests for many years he said. Dasa partnered with Milan Doshi and Dilip Patel, who has been involved in the hotel industry for more than three decades. They started by distributing Bhagavad-Gitas to hotels in the San Francisco Bay Area.

At first they worried guests and hotel owners wouldn’t accept the books, but Dasa said, “we quickly found that prominent motel owners whole-heartedly welcomed and supported this program and that their guests were appreciating finding the Gita.”

Support grew from there with the help of the International Society for Krishna Consciousness (ISKC) around the United States, Canada and Britain. ISKC is a nonprofit network of more than 500 temples, schools and communities whose members donate money for numerous outreach programs, including the Motel Gita. The group also recruited their members to help deliver the Gitas to interested hotels.

There are an estimated 1.79 million Hindus in the United States, according to The Pew Forum on Religion & Public Life. More than 1 billion around the world, making Hinduism the world’s third-largest faith after Christianity and Islam.

The Asian-American Hotel Owners Association reports their 11,000 members, predominantly Indian-American, own more than 20,000 hotels in the United States. Dasa said that definitely helps their cause. Hindus make up roughly 80 percent of the population in India with an estimated 974 million believers, according to The Pew Forum.

Manu Patel is the owner of a Days Inn hotel in Salem, Oregon. He requested the Gitas for his hotel and says the response has been very positive. “We have many customers come to the front desk and ask for a copy to take home,” he told CNN.

Jitu Ishwar owns four hotels in Ukiah, California. He said he often sees guests reading the Gitas they found in their rooms while eating breakfast in the lobby.

Ishwar said God has given him a lot and this is his way of saying thank you.

“Bhagavad-Gita provides depth of knowledge not easily accessible to people in the Western countries. The concept of spiritualism, nature and God described in this holy book should be shared for the benefit of all humanity,” he said.
Find them here: http://bit.ly/2MNjwOx