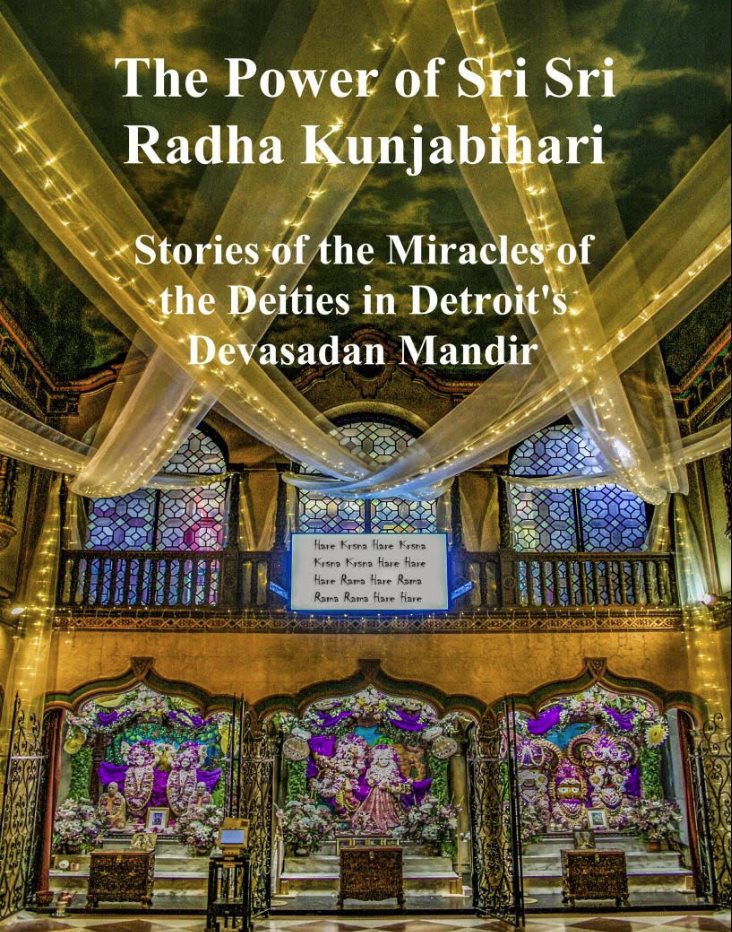 NEW BOOK: The Power of Sri Sri Radha Kunjabihari
By Sri Nandanandana dasa (Stephen Knapp)
Stories of the Miracles of the Deities in Detroit’s Devasadan Mandir
Along with Lord Jagannatha, Balarama and Lady Subhadra, and Sri Sri Gaura Nitai

This book gives an idea of how much power, mercy and blessings have come from the Deities of Radha and Krishna in Their forms of Sri Sri Radha Kunjabihari in the Detroit temple known as Devasadan Mandir. There are also stories about the reciprocation that has been experienced with the Deities of Lord Jagannatha, Balarama and Lady Subhadra, and Sri Sri Gaura Nitai who are also at Devasadan Mandir.
The Deities of Sri Sri Radha-Kunjabihari in the Detroit Iskcon Krishna temple are practically the oldest installed Deities in the Detroit area. And for that reason, They have been worshiped in a regulative way longer than any other Deities in the area. For example, the large Deities of Lord Jagannatha, Lord Balarama and Lady Subhadra first appeared in the Detroit temple back in 1968, having been carved by Nara-Narayana das, and have a long history of interacting with the devotees and granting prayers, blessings and mercy to the devotees who pray and worship Them. They have displayed Their power and love and reciprocation to numerous devotees in many ways.
Srila Prabhupada visited the Detroit temple on June 26, 1971. The Deities of Sri Sri Radha Kunjabihari were installed on Govardhan Puja of 1972. Srila Prabhupada again visited the Detroit temple when it was on Jefferson Street on August 2, 1975, which was when he first saw the Fisher Mansion and decided that it should be purchased. The devotees moved themselves and the Deities into the mansion in 1976. Srila Prabhupada visited the new temple for a few days in May, 1976, during which time a great number of devotees gathered here from across the country. This is also when Srila Prabhupada personally installed the Deities of Lord Chaitanya and Lord Nityananda here, which were the last Deities that he ever personally installed anywhere. So, these Deities are also very special. This is why many devotees still take special regard for attending the temple of Devasadan Mandir. Later, the Deity of Sri Nathji was installed in the year of 1993 at the completion of what is now the Sri Nathji Hall.
In this way, this Devasadan Mandir is the oldest Vedic temple in the Detroit region, and the Deities here have also been worshipped longer than any other installed Deities in the area. This has directed more devotional energy toward Them than any other Deities around. All this devotional energy has entreated Them to reciprocate with the devotees in many ways. The many ecstatic stories within this book from over 20 devotees are some of the examples of the special mercy, blessings and power that have come from these Deities that we all can experience.
Furthermore, in the Katha Upanishad (1.2.23) it is said: “The Lord is obtained only by one whom He Himself chooses. To such a person He manifests His own form.” And Sri Sri Radha Kunjabihari are known for being especially merciful in this way, that They reveal Themselves and reciprocate with Their servants more quickly and more freely, and most mercifully than you may generally find elsewhere. It all depends on one’s sincerity and devotion. Yet, we have seen that even without deep devotion, but simply by engaging in sincere service, these Deities have reciprocated with the devotees. Some of the stories that you will find within will show that. This may be highly unusual but has happened to those who are most fortunate, or who are blessed by the good wishes or favor of the other devotees. These stories show that a little reciprocation from Sri Sri Radha Kunjabihari, or Lord Jagannatha, Balarama and Lady Subhadra, and Sri Sri Gaura-Nitai, has increased the faith and devotion of these devotees who have experienced this, and have propelled them in their spiritual advancement and understanding of how Sri Sri Radha Kunjabihari can interact with them. This experience is open to all who wish to sincerely offer service or pray to Them, as these stories will show.

Krishna in the Heart of Europe