A visit to the Bhaktivedanta Manor 20-acre farm 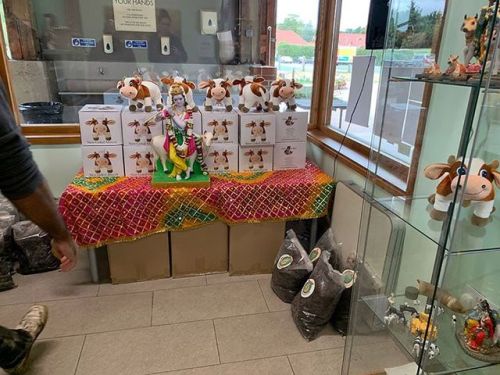 Sanj, who has been on the team for six years, gave me a tour of their pasture. During the excursion, I noticed many similarities to the New Govardhana goshala and its cow protection program.

Due to the climate in the UK, in winter all the cows are kept inside an impressively large goshala and handfed so they have enough space for all of their 62 cows.

Like our herds, they are broken up into different groups: the milking and breeding cows, working bullocks, retired cows, retired bullocks and two small herds with two very feisty bulls. They have enough space to let them all have their own paddocks.

Some of the cows are kept close to or inside the goshala on weekends so that guests have the opportunity to meet and feed them. These cows have a lot of interaction with people, so they are very calm and peaceful … of course, you have a few cheeky ones here and there, but that’s to be expected!

The milking area is large and clean with windows so that guests can watch the cows without causing distractions. This is much like the intention of New Govardhana’s new milking area. We want to be able to provide guests the experience of seeing a cow giving her milk, but we also want the cows to be peaceful and calm.

Calves are kept close by for the mother to return to after milking, just as we do at New Govardhana. With bhajanas playing softly in the background, a beautiful mood is set for both the cows and those who
serve them.

The Manor receives hundreds, maybe thousands, of guests in a week, so the goshala has a small shop with different products for sale. Upstairs, there are two educational facilities where seminars are held to educate people about cow protection and for the team to have their meetings.

They also have a connected kitchen where they make the milk sweets and other treats, like we do in our goshalla here.

We continued our tour through the paddocks, being greeted by each herd of cows as we walked through, until we reached the end of the farm where I was surprised to see they had a Krishna Village-like model.

There were huge, tunnel-shaped greenhouses for growing veggies and flowers organically alongside shipping containers converted into accommodation for the WOOFERS.

Usually the Manor has anywhere up to 25 volunteers throughout the year to help with the gardening and they also spend some time with the devotees.

The temple offers three-month bhakta courses for those who want to delve deeper into Krishna consciousness, which many of the volunteers do. I met some devotees who had come through this program, and they felt inspired.

I was very grateful for this tour as it opened my eyes to what was being done there, and I could appreciate even more how important cow protection is and how we can all learn from each other.

In the photo: Some of the products available at the Bhaktivedanta Manor goshala shop.