Out of sight out of mind? 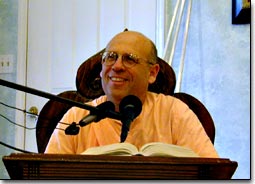 Q. Perhaps I may ask one question: we know Vaisnavas are oceans of mercy and compassion for the suffering jivas, so how can a devotee really be happy in the spiritual world knowing that there are countless living entities suffering horrendously in the stress planets? Spiritual amnesia, out of sight out of mind?

A. That is a thought provoking question. A pure devotee is one who knows that Krishna is everything. Although many pure devotees often are affected by Yoga Maya in seeing Krishna as their lover, friend, etc., ultimately there is an understanding among pure devotees that Krishna is the supreme controller and is doing everything. So the knowledge that Krishna is doing everything possible for the jivas who ultimately must exercise their own free will to go back to Godhead allows them to remain in the spiritual world. Otherwise, the spiritual world would be empty and everyone would be out doing missionary work. Of course we know that some devotees prefer to accompany Krishna in His missionary activities.

There is another point. Ultimately the essence of pure devotion is the pure desire to please Krishna. Krishna Himself makes perfect arrangements to save the fallen souls and assigns a sufficient number of devotees to preach. As I said, since everything depends upon the free will of the conditioned souls, there is, in a sense, a finite amount that can be done for them. Therefore those pure devotees whom Krishna wants to preach feel inspired to preach and will be happy in no other service. Those pure devotees whom Krishna wants to be with Him in the spiritual world can only find happiness in that service since that is Krishna’s pleasure. Krishna’s pleasure in retaining pure devotees in the spiritual world is never a selfish desire and never limits, impedes or reduces the practical preaching that goes on in the material world.

Hoping you are well
With best wishes,
Hridayananda das Goswami

Recent mercy story
Vraja...where are you?

3 Responses to “Out of sight out of mind?”