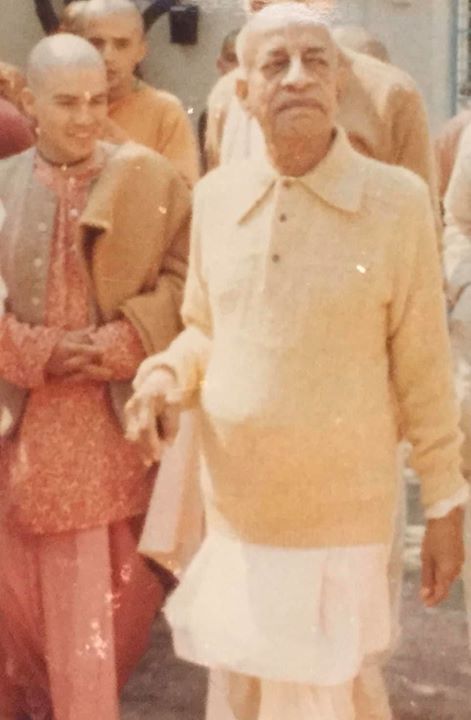 He was the first Latin American devotee from Mexico to join the movement back in 1969 in Los Angeles, CA.

Before going to Los Angeles he was living in the city of Guadalajara in Mexico, where he was attending University and also had a job as a printer in a printing shop.
However, he was frustrated with his life and wanting to escape the tedious routine of his everyday life, he decided to go to Los Angeles, CA.

Once in Los Angeles, he was walking in the Downtown area when he heard a unique sound that completely captivated his mind and shattered all his thoughts and values in life. It was the devotees doing Hari Nam.

Before he could realize what was happening he looked and the devotees were gone.
Full of determination he decided to go there the next day hoping to find the devotees again, but they didn’t come.

He continued to go there almost every day, but it took one month before he was able to see them again.
This time he didn’t waste a moment and went directly to meet them.
He began a conversation with Keshava Prabhu to whom he asked how much was the membership to be a part of the group.
Keshava told him all he had to do was to shave his head and dress like them.
Quite surprised about the simplicity of the requirements he asked Keshava if he could accompany them this one time, and Keshava told him, “if you come you won’t come back, it will be forever”.
He didn’t mind, so along he went and joined the temple.

Prabhupada was planning to visit Los Angeles at the end of that year 1969 and Karandhar, Rameswar and Jayatirtha wanted to surprise Srila Prabhupada with a present… the first Krsna Book, but they were having difficulties designing and creating the cover of the book.
Noticing their preoccupation, Pippalai approached them and told them he had work in a printing shop and knew how to do the design.
So they supplied him with the materials he asked for and sure enough, he designed the cover of the first Krsna Book which was immediately sent to the printers.

In this way, when Srila Prabhupada arrived they gave Him the nice present they had planned to give Him.

As a reward Pippalai was offered the cleaning of Srila Prabhupada’s quarters.

On the day of the installation of Their Lordships Sri Sri Rukmini and Dwarkadish Pippalai received his first initiation from Srila Prabhupada.

A few months later he was transferred to New York to work at ISKCON Press producing books such as “Easy Journey to Other Planets”, “Krishna the Reservoir of all Pleasure” and others including the Vyasa-Puja books. He was also in charge of printing the invitation cards the devotees would pass out on Sankirtan, he would print as many as 25,000 just for the weekend.

Altogether he worked at ISKCON Press for five years (there are pictures in some of the old Back to Godhead magazines of him working the big printing press, he also comes out in the film “The Hare Krishna People” made by Yadubara).

The BBT in New York (as ISKCON Press was later called), folded up in 1975, and at that time Pippalai traveled to Mexico City to meet Srila Prabhupada on His visit of February of 1975.

After Srila Prabhupada left Mexico, Pippalai went to India where he served in the Bombay Temple for approximately eight years doing Pujari work to Their Lordships Sri Sri Radha Rasa Bihari, he also worked on the Life Membership Program, and was instrumental in starting the Indian BBT.
He also worked in the Mayapur Temple for some time.

Pippalai was a simple and humble devotee and had unflinching faith and deep love for our Divine Eternal Father Srila Prabhupada.

He was my very good friend and as well as many other devotees who knew him, I will miss him, but I am convinced that he is on his way to meet with our beloved Srila Prabhupada to continue serving Him, just like many of our Godbrothers and Godsisters who have already departed, and I am also convinced that one day we will all be together again serving Him our beloved Guru Maharaja our Beautiful Srila Prabhupada.

To finish the year of in style, we have announced the Final…