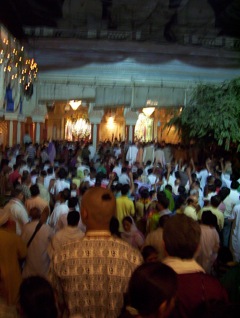 This should be us, representing the Most Merciful Avatar, SRI CAITANYA MAHAPRABHU

Srila Prabhupada did so much of this, and left the legacy to us.

Surely is it blisssful to see the massive crowds at the KRSNA BALARAMA mandira, with thousands focused on offering their lamp to Lord Damodara. Although the crowds are too much for me, I know the Srila Prabhupada is happy to see it. Also the constant kirtans and book distribution is wonderful.
But, for the last few years I have been disturbed when visiting Vrndavana. I get upset to see too much of the covering of Maya. We almost never see a bullock working in the fields, tractors are rushing everywhere. In the villages we see few cows. Most families are keeping buffalos, thinking their milk is superior. If we see a goshalla, it is rare to see a bull or an ox. They are sold and shipped out.
Many locals have become very rich, yet we see more extremely poor families. The rich are building guesthouses to make more profit from the international pilgrims. I was wondering what is wrong with me that I cannot relish the spiritual holy dham. The parikrama path means dodging all kinds of speeding vehicles, from motorbikes to lorries and tractors with oversized trailers. And many large families crammed into small cars, speeding through the Holy Dhama. Sightseeing but not hearing.

I was happy to see Rupa Raghunath Prabhu’s Sandipani Muni school. He is taking the most poor children and providing medical care, good food and education, both spiritual and material Many could not say “Hare Krsna” when they first came. We have all encountered the children who just chant “rupee, rupee” or at Govardhan “pencil, pencil”. Now they chant all the time. He also provides fresh water wells in remote villages, and medical help there. He is restoring some of the sacred spots and has crews going around cleaning up the carelessly thrown trash of the common folk. Kind devotees from all over the world are happy to sponsor these magnanimous programs.

Sandipani Muni School also has bullock powered school buses. At least someone is engaging the Oxen and Bulls.

Another bright spot is Kurma Rupa Prabhu’s “Care for Cows”. Many locals not only neglect cows, but abuse them. Kurma Rupa Prabhu takes in the victims and nurses to health. He now has over 300 bovine residents. Again inter devotees donate nicely to support this merciful project. 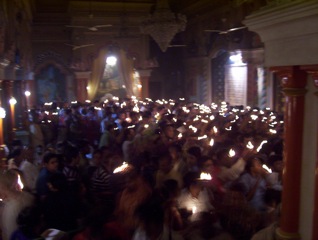 Recently, after many years, I visited Jaganath Puri. There I had similar problems. Walking down the road from our temple, which is opposite of Hari Das Thakura’s Samadhi, there are many restaurants. All feature, “egg thali”, “fish thali”, and many specific kinds of fish. Some have Veg thali. It is very hard to find a pure vegetarian restaurant there. Whoever is in power will not allow us into the temple, but they allow so much non veg food to be sold everywhere. I guess the is mercy for the the numerous fishermen who reside there. Surely there are many great devotees there and we should see everyone as four armed. I was also feeling that something must be wrong with me that I am bewildered by the maya.
I guess they are taking advantage of the following from Sri CAITANYA BHAGAVAT.

“The demigods glorify this place as the most auspicious of all places of pilgrimage. The act of sleeping here is equivalent to deep meditation, samadhi. Similarly, simply taking a lying posture here accrues the same pious result as offering obeisances to the Deity. Simply walking about here is the same as circumambulation, pradaksina, and all speeches here are the equivalent to glorification of the Supreme. These glories are all enumerated in the Vedas. Such is the potency of this ksetra that even if one eats fish here it is the same as eating sacrificial vegetarian food, havisya.”

So should I just ignore all the current events, find some comfortable guesthouse and read?

Then, while looking for something in the VEDABASE, found the following:

Abhay stayed in Puri for three or four days, wandering around the holy places and visiting the famous Puri seaside, with its sparkling beach and strongly pounding surf. Several times he recognized some of the priests from the Jagannatha temple as they smoked cigarettes, and he heard of other unsavory activities of the sadhus connected with the temple. What kind of sadhus were these who ate fish with their Jagannatha prasadam and smoked? In this respect, he found Jagannatha Puri disappointing.
On the overnight train ride to Calcutta, Prabhupada could not rest because of two drunken men in the next compartment. Throughout the night they were howling and addressing each other, “Oh, Dr. Mukerjee!” “Oh, Mr. Chatterjee!” Prabhupada remarked with disgust that these were the names of Bengali brahmana families, but that now they had become drunkards.

Jagannatha Puri, he said, had been a holy place for thousands of years, but within a few years it would be so no longer. People were using Puri as a seaside resort for recreation-people like Dr. Mukerjee and Mr. Chatterjee, who had no understanding of spiritual life.

So this is all a message for us as to the urgent need for preaching Srila Prabhupada message and distributing his books profusely. Years ago, when I was in Puri, locals asked, “nitai gaur radhe syama?”. I would say “Hare Krsna” and no was was familiar with it.

Then I heard this message from Srila Prabhupada:

A rascal civilization. So let us try our best. What can be done? You also helping in this movement. So don’t spoil the movement by manufacturing ideas. Don’t do that. Go on in the standard way, keep yourself pure; then movement is sure to be successful. But if you want to spoil it by whimsical, then what can be done? It will be spoiled. If you manufacture whims and disagree and fight amongst yourself, then it will be another edition of these so-called movements. It will lose the spiritual strength. Always remember it. You cannot…. Now, actually, people are surprised: “What this Hare Krsna mantra has got power that it is changing so quickly?” And on the other hand, it is to be admitted, unless it has got power, how it is changing? So we have to keep that power. Don’t make it an ordinary musical vibration. It is a different thing, spiritual. Although it seems like musical vibration, but it is spiritual, completely. Mantrausadhi-vasa. Even, by mantra, the snakes can be charmed. So mantra is not ordinary sound vibration. So we have to keep the mantra in potency, potent, by offenseless chanting, by remaining pure. If you pollute the mantra, then it will lose its effect. (devotees discuss some money matters in background)

“A Vaisnava travels to places of pilgrimage to purify them and reclaim fallen conditioned souls. This is one of the duties of a Vaisnava. Actually, Sri Caitanya Mahaprabhu is not a living entity but the Supreme Personality of Godhead Himself. Consequently, He is a fully independent controller, yet in His position as a devotee, He carries out the activities of a devotee.”
PURPORT
Srila Bhaktisiddhanta Sarasvati Thakura points out that because there are many permanent residents in holy places who do not precisely follow the rules and regulations governing living in a sacred place, exalted devotees have to go to these places to reclaim such persons. This is the business of a Vaisnava. A Vaisnava is unhappy to see others materially enmeshed. Sri Caitanya Mahaprabhu taught these activities of a Vaisnava although He is the worshipable Deity of all Vaisnavas, the complete and independent Supreme Personality of Godhead. He is purnah suddho nitya-muktah — complete, completely uncontaminated and eternally liberated. He is sanatana, for He has no beginning or end.
CAITANYA CARITAMRTA Madhya 10.14

500th anniversary of Lord Caitanya Mahaprabhu's sannyasa, January 14th-19th 2010
Trials in the service of the Lord

Do We Match Up?

Where are the Women’s Ashramas?