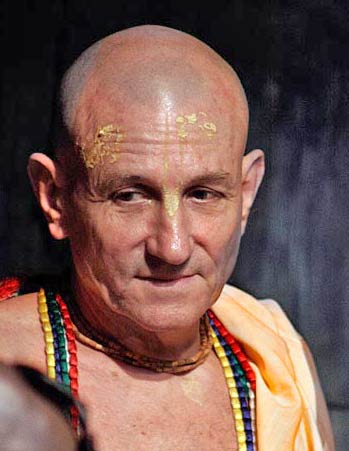 Lord Nrsimhadev shows His mercy even to a non devotee.

Yasoda Mata’s 85-year-old foster father passed away two months ago. During his stay in the hospital, Yasoda Mata prepared a tape recorder and played the Hare Krsna Maha Mantra all day long in his ward.

Her foster father was actually in semi-coma, but miraculously when he heard the Maha mantra, gradually he awoke and with closed eyes he appeared to enjoying the music and the sound vibration. He started to follow the tempo by tapping his hand on the edge of his bed. His finger ring made the sound like “don, don don” “don, don don …….. ”

He looked like he was totally meditating on the Maha mantra. Suddenly he spoke, “Look! There is a huge 5 clawed man, and his head looks just like a lion’s, he is coming into my ward. Don’t you see him? He is coming ….” The foster father still with eyes closed said “Oh, yes, I forgot you all cannot see him, but he is really here. I do not know who He is?”

At that moment Yasoda Mata and her daughters looked at each other in great surprise and answered. “Father, He is Lord Nrsimhadev”. “What dev ??? I don’t know Him. But He is nodding His head to tell me that He is.” Yashoda mata felt great ecstasy in hearing this for in her house she keeps a model of the Nrsimha Deity from Mayapur and had been offering heart felt prayers to Him so that her father could leave the body without any attachment and that his soul can become Krishna’s devotee in his next birth.

Continuously her father said, “Look, He is smiling to me and starting to speak again .… Oh, He is telling me that I have to learn to chant what you are chanting now…. what exactly are you chanting ?” He said. “It is a mantra to call the holy name of Lord” Yasoda Mata replied. ” I don’t know what mantra, but please teach Me.” he said. “All right father, please repeat after me and listen carefully — Hare Krishna, Hare Krishna………” Yasoda Mata taught her foster father word by word patiently. Without taking a long time, he learned and tried to chant…. and chanted so nicely.

The next day he passed away with tranquility. During that weekend, we devotees here congregated together to do the kirtan for Yasoda Mata’s father at the memorial service. Yasoda Mata prepared the prasadam garland, Ganga water, tulasi, and put tilak on her father, which have all been done nicely and properly according to her guru maharaj H.H. Giridhari Swami’s telephone instruction. Her foster father’s face looked so peaceful, his cheeks were a little pink, and his body was soft. After some customary ceremonies the body was sent to the incinerator.

A Few hours later the people who work in the memorial service came to us and exclaimed in amazement – “We have never seen anyone’s ashes look so white and beautiful like jade as your father’s! What happened to him? What were you chanting for him?” “Could you write it down for us? We want to learn and we think we can also chant while doing our service here.”

Why the Lord Himself personally appeared before someone who we consider is not a devotee proves the sastric statement – that if one is always engaged in the devotional service of the Lord, their family members will be benefited as well. From Lin Tulip Taiwan, 20th March 2006

The secret of fearlessness
Out of sight out of mind?

One Response to “Recent mercy story”