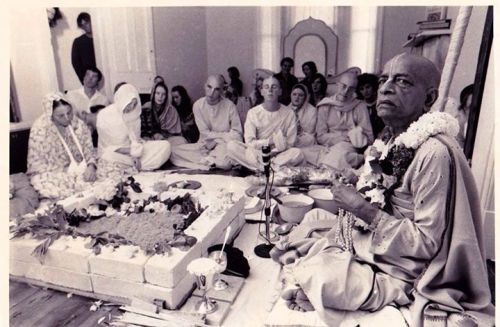 This photo was taken in Melbourne, Australia, Thursday 6 April 1972, Hare Krishna Temple @ 14 Burnett Street, St. Kilda. on the occasion of the installation of Radha and Krishna.

“Twenty-year-old Mignonne Steele, a student of classical ballet, was walking down Bourke Street one spring day, when smiling Upendra offered her a Back to Godhead magazine, the cover adorned with a picture of Krsna dancing with the gopis. She was feeling the weight of the heavy pressure her competitive career demanded of her. The intensity had become almost unbearable and, although not a religious person, she had prayed to God for the first time only two weeks before “God, I’m suffering. If you exist, please help me.”

Mignonne recalls: “I took the magazine home and read it. An address was stamped inside the cover:

Every night after ballet, I would walk to Station Street for the arati ceremony at the temple. It was a wonderful experience. After two weeks, I just gave up my ballet. I literally walked out, and moved into the temple.”

Mignonne became Mekhala devi dasi in the ceremony pictured in the photo.