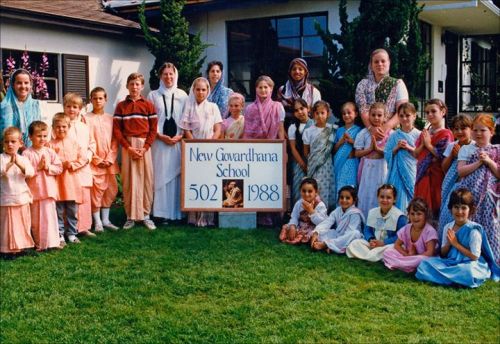 Photo History of New Govardhana, Iskcon San Diego (Album of photos)
In early 1977, we moved from Hillcrest to the new building in Pacific Beach and began making it into a temple. That’s where we begin.
History of the Temple Design.
The building was purchased by ISKCON in 1976. Gunagrahi Maharaja (the temple president at the time) was inspired to create a beautiful temple interior and worked tirelessly to achieve this goal.
Kirtika devi dasi was put in charge of the design. She traveled to India where she researched and sketched the famous medieval temples and palaces found in the rugged state of Rajasthan and in the holy city of Vrindaban.
Returning to San Diego, and working with a volunteer team, Kirtika dasi hand drew scale sketches of the arches, figures, and other design elements. She then carved each of these into a life-size clay model. From the clay model, fiber-glass molds were made, and from these, the actual pieces were cast from plaster of Paris. These plaster of Paris pieces were then mounted onto the walls of the temple, where they were hand-painted in fine detail.
The initial work was completed for the grand opening of the temple in November of 1977. Finishing the detailed painting continued for several years thereafter.
Design Elements
The arches, columns, and other filigree work are styled after elements found in the renowned Govindaji temple in the city of Jaipur, in Rajasthan.
The elephant heads are a traditional symbol to invoke auspiciousness. It is said that if their trunks are up, it brings good fortune.
While manifesting His divine pastimes (“lila”) on earth, Krishna reveled in His role as young cowherd boy. Also, in Vedic tradition, the cow is respected like one’s mother because she nurses us with her milk throughout our life. In addition, the peaceful village life exhibited by the inhabitants of Vrindaban, is a model of “simple living and high thinking”. As reminders of these points, you will find small cows lining the temple’s baseboards.
Standing on the column caps, along the temple walls, you will find musicians and dancers. These represent the Gandharvas, who, according to Vedic* cosmology are denizens of the higher planetary systems. The Gandharvas visit temples to play celestial music for the pleasure of the Lord and to glorify the good fortune of those guests and pilgrims blessed to be visiting the temple.
In each of the four corners of the temple you will find a bas-relief of Krishna lifting Goverdhan Hill.
Find them here: https://is.gd/BKsmJa

Pilgrimage to Mayapur (Album with photos) Srila Prabhupada: If…