A Talk at World Parliament of Science, Religion and Philosophy (13 min. video) 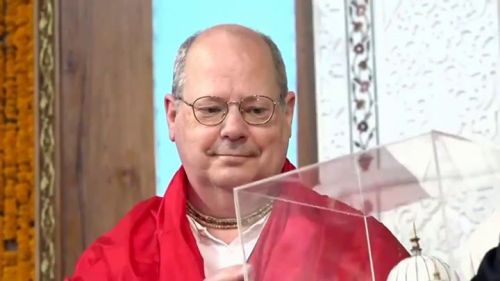 A Talk at World Parliament of Science, Religion and Philosophy (13 min. video)
Sri Nandanandana Das (Stephen Knapp): This is a talk I gave at the World Parliament of Science, Religion and Philosophy, held at the inauguration of the World Peace Dome at the MIT University in Pune India, in October 2-5 of 2019. My talk was to emphasize the need to make modern universities centers for holistic development, which would include reaching our fullest potential on all levels, such as materially, emotionally, mentally, healthily, intellectually, and even spiritually. This is based on the use of teaching the principles of Vedic Dharma, especially based on the timeless teachings of the Vedic texts, like the Bhagavad-gita, Upanishads, Puranas, etc., which was common before India’s independence when it became a secular nation, thus losing its freedom to teach its own culture to its own children, at least through a government-affiliated institution. This is what needs to be changed, and to bring back the heritage of India and the means to instill proper human skills and principles of value and morals in the youth of today through its timeless cultural teachings.
Watch it here: https://is.gd/V9q6G6