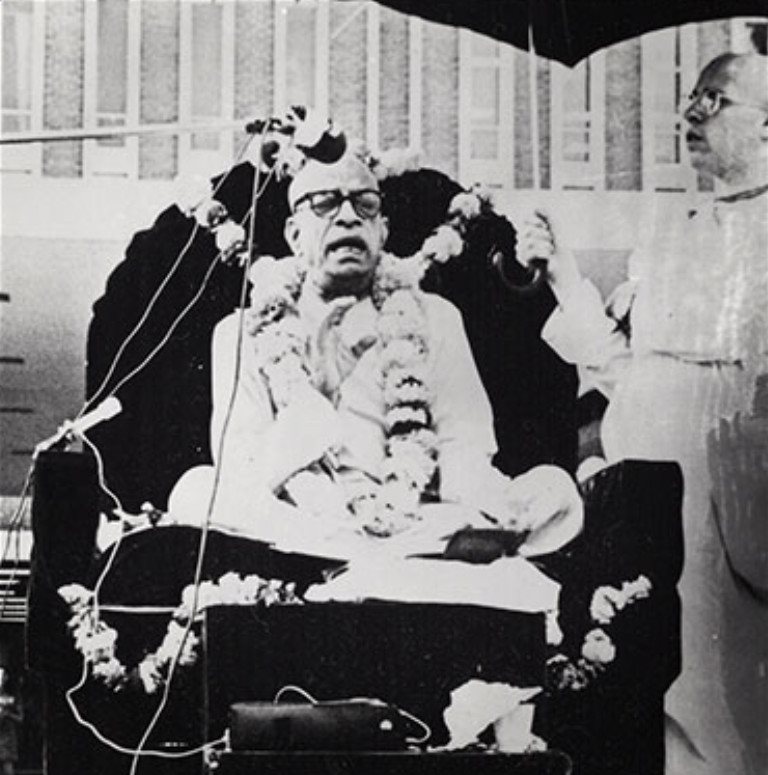 Prabhupada priya dd: A few days ago, while doing some writing at the University of Florida library, I took a break to chant my midday Gayatri, and as I looked out from the 4th floor over the Plaza of the Americas, I felt Srila Prabhupada’s presence very strongly. I could almost visualize him walking down the path between the library and the old chapel (now auditorium).

That’s when I realized that the UF campus is a holy place of pilgrimage! Srila Prabhupada actually did walk in that very place in June 1971 and gave a lecture to a group of students right there in the Plaza of the Americas. My own diksa guru, HH Hridayananda das Goswami, was preaching in Gainesville when Srila Prabhupada came. You can see him in the picture above holding the umbrella over Prabhupada’s head. Later, after getting his Ph.D, he became a professor of Religions of India and Sanskrit at UF, so he certainly walked that path many times. It was he who suggested I come to serve in Gainesville. Now, I help serve prasadam to students in the same place, and I also do educational programs like Bhakti Shastri at our preaching center, Krishna House, which is just a 5-minute walk from UF. Just being here I feel connected to Srila Prabhupada and my spiritual master, like this place has been handed down to me through disciplic succession.

During that brief visit to Gainesville, Srila Prabhupada instructed the local devotees: “So, do something wonderful there in Gainesville. Wonderful means simply you chant loudly and distribute prasadam. That is not very difficult. It is very easy. Simply if you do it enthusiastically and sincerely, then success will be there.” The devotees have faithfully followed this instruction since that time establishing a regular program called Krishna Lunch, which now distributes an average of 1000 plates of prasadam each day, right on the spot where Srila Prabhupada spoke. Along with the prasadam distribution, there is a kirtan group loudly chanting the holy names, and devotees distributing Srila Prabhupada’s books. And, just as Srila Prabhupada said, the program has had great success. Hundreds of devotees have started their spiritual lives here in Gainesville. The University has recognized Krishna Lunch as such a vital part of the campus scene that they erected a small monument commemorating Srila Prabhupada’s visit to the campus, and this year they added a brick platform next to the main footpath through the Plaza just for the kirtan group to sit on!

So many devotees have walked through the Plaza over the past almost 5 decades. So many holy names have been chanted, so many books distributed, so many plates of prasadam have been served. And it’s still going on! Even as I looked out from the 4th floor of the library, students were walking by with plates of Krishna prasadam, not knowing how lucky there are to be in that holy place. They are all taking part in Srila Prabhupada’s ongoing transcendental pastimes which are also Lord Caitanya’s pastimes. Places like Gainesville are like portals to the spiritual world. And here I am trying my best to usher souls into it. So amazing!

This is confirmed in Srimad Bhagavatam 1.13.10 where Maharaja Yuddhisthira said to Vidura, “My Lord, devotees like your good self are verily holy places personified. Because you carry the Personality of Godhead within your heart, you turn all places into places of pilgrimage.” Srila Prabhupada traveled around the globe turning every place he visited into a holy place of pilgrimage. And when generation after generation of devotees remain in such holy places, faithfully executing the orders of the founder/acharya, holy places like Gainesville, Florida, become surcharged with ever-increasing spiritual ecstasy!

As I walked back to Krishna House that afternoon, I was feeling so fortunate and joyful, and I wondered why this spiritual realization came to me so strongly today. Then I figured it must be due to the association I recently had with my senior godsister, Krishna Priya. She came and spent a couple of days with me earlier this week, and I was fortunate to have her stay in my apartment. I happily put aside whatever I had to do, and I just gave those two days to her. I tried to help her in any way I could, and we had a wonderful time together. On reflection, I was sure that my little glimpse of transcendence was due to Krishna being pleased with my service to His dear devotee. He showered some drops of mercy on me, and because Krishna Priya has so much love for our spiritual master, I also felt that connection strengthened.

Not by coincidence, my phone rang shortly afterwards, and it was Krishna Priya calling just to thank me for my hospitality and to tell me again what a wonderful time she had staying with me. This confirmed my feeling 100%!

In this way, Krishna showed me the inconceivable potency of pure devotees of the Lord and the amazing benefits we get from doing even a small amount of service for them. I’m so grateful to Krishna Priya for giving me her association, even for a short time. It confirms the statement of Sri Caitanya Mahaprabhu that even by a moment’s association with a pure devotee, one can achieve all perfection. I’m also eternally grateful to my spiritual master for bringing me to the holy place of Gainesville and to Srila Prabhupada for coming to the West and transforming it, or at least parts of it, into the spiritual world.

6 Bedrock Principles that will Improve your Spiritual Life: 1….