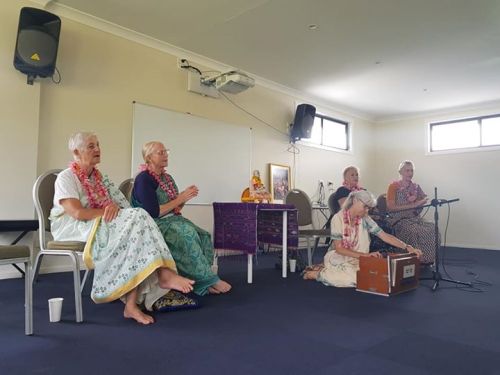 We got to hear the wonderful life-changing experiences and realizations that they had serving Srila Prabhupada, … their immense gain in a moments association with Srila Prabhupada, …. his vapu (physical presence) and vani (instructions). Snippets of their amazing life stories and how they were/are empowered to act on behalf of Srila Prabhupada.

HG Ambika Lambert Prabhu: Srila Prabhupada’s eyes (glance) of love. He is available to all of us through his books.

HG Rasarani Snowfire Prabhu: Srila Prabhupada is so kind to everyone, he notices even someone insignificant (in her humility, Rasarani mataji considers herself insignificant, but to get the association of a pure devotee and to continue following his instructions is not an ‘insignificant’ feat at all).

HG Sukla Prabhu: The desire to please Prabhupada empowers one.

Thank you Krishnarupa mataji, Carol Krishnarupa D’Costa for organizing this rare and wonderful event. Looking forward to the recording being made available soon (thank you for arranging for Giridhari Prabhu to capture this historical footage, video recording.
More photos: https://is.gd/yOO8JT
The recording: http://bit.ly/30lkS9M