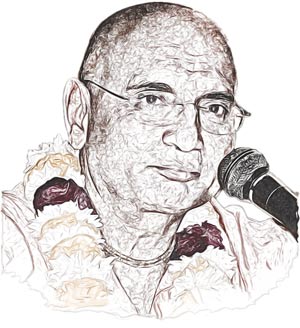 (Please note that due to a poor recording a lot of the lecture was indistinct and it ends abruptly.)

Hare Krishna! So today is the disappearance day of Srila Jagannath das Babaji Maharaj; Srila Rasikananda Prabhu and Srila Tamal Krishna Goswami Maharaj and because of this occasion we are going to sing a special song, which is the lamentation between separation from the ward and his superiors. It is written by Srila Narottam Das Thakura. We chanted this song in the morning after mangal arati so in the class also because of the day also of celebrating the disappearance of the three very exalted devotees, acaryas we will sing the song. And that is why today also because it is the disappearance day of these personalities we don’t have any particular verse. We will speak on each of these diffferentpersonalities. In the translation of this song – it goes like this –

He who brought the treasure of divine love and who was filled with compassion and mercy — where has such a personality as Srinivasa Acarya gone?

Where are my Svarupa Damodara and Rupa Gosvami? Where is Sanatana? Where is Raghunatha das, the savior of the fallen?

Where are my Raghunatha Bhatta and Gopala Bhatta, and where is Krsnadas Kaviraja? Where did Lord Gauranga, the great dancer, suddenly go?

I will smash my head against the rock and enter into the fire. Where will I find Lord Gauranga, the reservoir of all wonderful qualities?

Being unable to obtain the association of Lord Gauranga accompanied by all of these devotees in whose association He performed His pastimes, Narottama das simply weeps. [Saparsada-bhagavad-virahajanita-vilapa (je anilo prema-dhana)]

Tamal Krishna Maharaj was born in 1946 in New York City and he grew up like another American at that time. From his childhood he stood out as a very strong personality, very special and like other American youth thoughtful, intelligent American youth of those days in the ’60s Tamal Krishna Maharaj also became delusioned with the existing American society, intensely materialistic American society. In .. the youth of American were disillusioned with their materialistic way of life and decide to search for a positive alternative and counter culture. And like many other youth Tamal Krishna Maharaj left home and went to San Francisco which was the THE place for young Americans at that time. And like the other ordinary Americans he was hanging onto then Golden Gate Park in Haight-Ashbury area in San Francisco. But Tamal Krishna Maharaj actually went to the big forest and he was living there with a group of young boys and girls. He lived in a hole of a .tree. A .tree is huge. Sometimes when there is some cavity in the tree he was living there. And Srila Prabhupada went to that when he was invited to that community.

Prabhupada had sent him on various missions. Like when the movement started to develop in London due to the wonderful endeavor of Mother Maliti and her husband Syamsundar Prabhu, Gurudas Prabhu, Mother Yamuna and Mukunda Maharaj and Mother Janaki. These three couples actually went to London and started the movement there. It is due to their intense sincerity the movement started to flourish. George Harrison became attracted to this movement and he became a follower of Srila Prabhupada and Srila Prabhupada sent Tamal Krishna Maharaj to London to establish sankirtan because Tamal Krishna Maharaj was an outstanding sankirtan devotee. He was an exceptional organizer. Then he went to France, he went to Britain and then Prabhupada sent him to India.

Tamal Krishna Maharaj was so intelligent. He got one person and made a separated arrangement with him without letting anybody know and came here sat under the banyan tree. Outside here on the property there was one banyan tree. He sat there and signed the contract and that is how our land was acquired. And he mentioned to me he arrived in Calcutta late in the night after he completed this assignment and Srila Prabhupada was still awake. Prabhupada was waiting for him. And Prabhupada was so pleased when he told him that he had got the land.

I also had a similar experience – actually the day he left in the morning I didn’t meet with him. I didn’t see him. The day before that we went to Calcutta, Jayapataka Maharaj, Gopal Krishna Maharaj and myself. We were in Calcutta to meet the police commissioner captain. So we had a very important meeting. Devakinandan Prabhu was also with us. So we came back very late. When I woke up Tamal Krishna Maharaj had already left. He left right after mangal arati.

Three days before that I was chanting with him. He was pacing up and down and I was chanting with him and at one moment he just told me take care of these boys in Calcutta. He had some disciples, very young boys took initiation from Tamal Krishna Maharaj and Tamal Krishna Maharaj was telling me again, “Please take care of them.” So I said, “Yes.” He said, “You are their father.” I said, “No you are their father.” Then he said, “No you are their father.” Generally there is the statement that the spiritual master is the father and his god brothers are the uncle but he just kept insisting that I am the father. I told, “Why you are speaking like that!

So atleast for me it is a clear indication that he left due to some divine arrangement of Sri Caitanya Mahaprabhu and Srila Prabhupada. A person like this, being such an intimate associate of Srila Prabhupada must have gone back to Prabhupada to assist him in some other mission that Srila Prabhupada is involved in, in another planet or in the spiritual sky. His Holiness Tamal Krishna Goswami Maharaj ki jai! Srila Tamal Krishna Maharaj’s thiro bhava tithi Mahotsava ki jai! Gaura premanande, Hari Haribol!

gauravirbhava-bhumes tvam, the personality who identified, nirdesta, he actually pointed it out that this is the birthplace of Sri Caitanya Mahaprabhu. Jagannath das Babaji Maharaj identified the birthplace of Caitanya Mahaprabhu and vaisnava-sarvabhaumah, he is the monarch of the Vaisnava world. In the kingdom of Vaisnava he is the sarvabhaumah. Sarvabhaumah means in Sanskrit – there are different definitions for a king. A superior king is a raj and then samraj and above the samraj is sarvabhaumah, who is the one predominating ruler of the others. So that is how Jagannath Das Babaji Maharaj was identified.

Rasikananda Prabhu was an exceptionally brilliant personality. He was born in Royni in a place Royna, which is in the Medinipur district in southwest Bengal. He was an extremely handsome person and extremely learned and he became interested in spiritual life from a young age. Bhakti-ratnaka describes that he became so intensely interested in spiritual life that there was a divine voice from the sky that announced, “Don’t worry. Soon your spiritual master will come and save you.” And due to that divine celestial voice he saw a great Viasnava came to that place in Royna. That was Syamananda Prabhu. Symananda Prabhu was a disciple of Hridaya Caitanya Prabhu and he was a siksa disciple of Jiva Goswami.

How to Navigate the Challenge of Kali-yuga