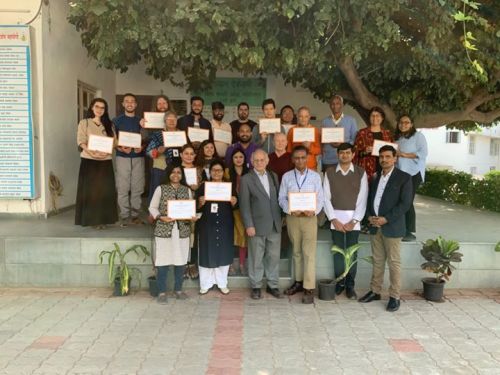 The International School of Jain Studies offers a ten-day (Dec. 27 to Jan. 7) introduction to Jainism each December-January for university students, especially those engaged in the academic study of religion. Jainism is a very ancient tradition, at least as old as Buddhism, with a rich literary canon and highly developed philosophy, centered around the principle of ahiṁsā—“nonviolence”. We were 23 students altogether, from several countries and varied backgrounds, including some undergraduates, some post-graduates, and some doctoral candidates doing research specifically on Jainism. The ahiṁsā ethic, so central to Jainism, was of particular interest to me, as I had been thinking and writing about this theme for the Cow Care book. A related interest was simply to learn “first-hand” about this lesser-known tradition to broaden my horizon of religious life, in pursuit of my interest in interreligious dialogue.

As explained by our main instructor, Dr. Shugan Jain, in India religious traditions are typically categorized as either astika or nāstika—based on whether the Veda is accepted as authoritative scripture or not. Jains are labeled as nāstika, along with Buddhists and other lesser known (or no longer existing) traditions, as they are seen as rejecting the Vedas. Also, the same line of demarcation is made between “brahmanical” and “shramanical” traditions, with Jainism and Buddhism falling in the latter category. Hindus, on the other hand, are typically labeled as astika and brahmanical, due to their regard for the existing Vedic literature.

But I suggest a different way of looking at this, considering that there are so many features shared across traditions, between brahmanical and shramanical ways. My idea is that if we take “Veda” in its broad sense as meaning “knowledge”, and if we recall that Jiva Goswami, the 16th century theologian of the Chaitanya Vaishnava tradition, says that only a fraction of the totality of Vedic literature is currently available, we can picture Veda as the ocean of spiritual knowledge from which all current religious traditions have drawn their inspiration. This way of thinking could serve to bring greater appreciation (greater wonder) among the different religious traditions, possibly lessoning the distance and antagonism among each other. And speaking of interreligious dialogue in relation to Jainism, an intriguing and rather central philosophical concept in Jainism is anekānta-vāda—the idea that truth is never comprehended in its totality by any one person. Also intriguing is that this idea gets juxtaposed with the notion that the Tirthankaras—the personages who are understood to have attained perfection, eternal liberation—are understood to be omniscient, all-knowing. Much of what makes religion so fascinating is the paradoxical nature of religious or theological claims (and religious practices).

How Aishvarya-jnana Acts Upon Vraja-madhurya
Are devotees caring about their health?
Tagged under: Nectar