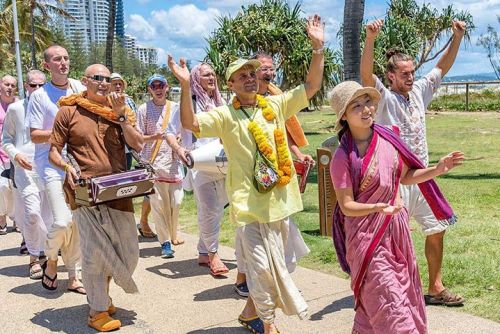 …there’s an atmosphere for lots of exhilarating chanting, extracting smiles from onlookers, with some participating vigorously…”

On weekends, Surfers Paradise is a hub of activity for visitors, bewildered souls still holding on to some vague hope of sense enjoyment. Yet it also creates an atmosphere for lots of exhilarating chanting, extracting smiles from onlookers, with some participating vigorously, clapping their hands and dancing.

Although perceivably it doesn’t appear as if there’s any danger, nevertheless, two Fridays before Christmas last year, one 17-year-old boy was stabbed to death, and another critically wounded near Govinda’s restaurant. This senseless act happened just a short time after we’d completed the hari-nama.

It was quite likely that the victim was on the street when the chanting party came past, and hopefully the sound of Krishna’s name entered his heart to create some benefit in his too-short life.

Such an incident emphasizes the importance of sankirtana and Lord Chaitanya’s mission to save the conditioned souls. At the same time, we can experience joyous spiritual upliftment within ourselves as we participate in the recommended meditation for this age of Kali.

MY EXPERIENCE AT GURUKULA
Three most important rules for chanting Hare Krishna
Tagged under: Nectar