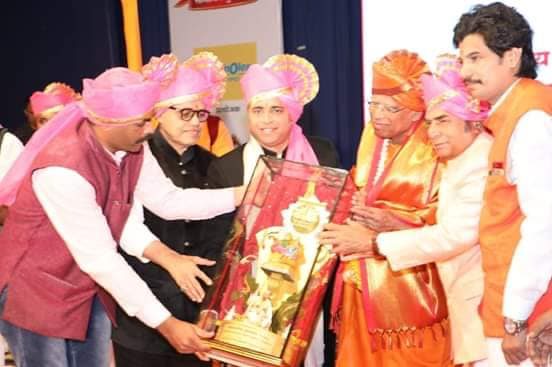 The Maharashtra Marathi Journalist Association undertakes several responsibility programs and as one of its activities awards the prestigious “Lifetime Achievement Award” to personalities who have immensely contributed to society.

This year the nominee of this prestigious award was one of Srila Prabhupada’s senior disciples, HH Lokanath Swami.

The ceremony was held on 4 February 2020 at Annabhau Sathe Auditorium in Pune in front of an audience of about 1500. Many dignitaries and media were in attendance. Amongst the dignitaries were Sriman Sunil Deodhar, National Secretary of BJP; Dr. D.Y. Patil, renowned Educationist and Philanthropist and Pratapsinh Jadhav, Chief Editor and Chairman of Pudhari Publications. Radheshyama Prabhu (ISKCON Pune Temple President) and Ekalavya Prabhu (GBC Deputy) were also present.

The following reasons were cited for selecting Lokanath Maharaja as this year’s recipient:

Lokanath Maharaja is
A World famous Kumbha – mela Mahant
An ISKCON Padayatra Minister and has completed Padayatras in 108 countries
A Famous kirtaneer in ISKCON
A dynamic Bhagavata katha speaker
Chairman of the Annual World Holy Name Festival
Chairman of Vraja-mandala Parikrama
An Active member of Navadvipa – mandala Parikrama
Builds temples and goshalas, not just all over Maharashtra, but all over India
The inspiration behind the Dindi from Alandi to Dehu to Pandharpur
The Author of 14 books
Built a Prabhupada ghata on the banks of the Candrabhaga whereby thousands of pilgrims coming to Pandharpura dhama will benefit
Water pollution is one of the most serious ecological threats we face today. The Association expressed their gratitude to Lokanath Maharaja who personally travels to almost every town and village in Maharashtra. Not only does Maharaja spread the message of the Bhagavad-Gita, but steps beyond that by getting involved in their social welfare. Maharaja was thanked for his efforts to successfully free the holy waters of Candrabhaga from pollution.
The ceremony was held on 4 February 2020 at Annabhau Sathe Auditorium in Pune. The function had many dignitaries and media in attendance. Amongst the dignitaries were Sriman Sunil Deodhar, National Secretary of BJP; Dr. D.Y. Patil, renowned Educationist and Philanthropist and Pratapsinh Jadhav, Chief Editor and Chairman of Pudhari Publications. Radheshyama Prabhu and Ekalavya Prabhu were also present.

Maharaja was honoured with a shawl, a trophy and a plague.

Sunil Devdhar: Without spirituality we cannot become happy and complete

Maharashtra Marathi Journalist Association: Lokanath Maharaja is a very kind person and pure in his nature. Maharaja can be equated to a flower whose aroma does not confine itself to a garden, but permeates all over. Like that, Maharaja’s kindness and purity is not just confined to ISKCON, but it is for everyone.

Lokanath Maharaja: I thank all of you for your presence on this occasion and also accepting me as one of you and for glorifying me. The glory of a Lord’s devotee is the Lord’s glory and the glory of our Bharat, the glory of Bhaktivedanta Swami Srila Prabhupada. He was Bharatratna. He recognised our real Bharat. He recognised the wealth of Bharat.