Another devotee victim of the London airport security procedures 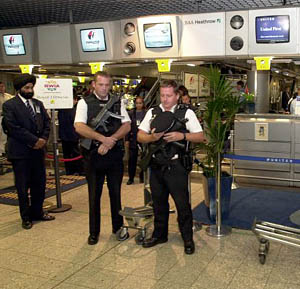 If you can avoid travelling through UK airports all the better, if you have no choice, then be thoroughly prepared for security at these airports.

Yesterday I had a trying experience departing from London Heathrow. Although I was well-informed about not being able to carry a handluggage, I still thought that at least a book to read on the flight wouldn’t cause any harm.

Apart from having to wait outside till one hour before flight time, we were made to carry only air ticket, passport and some luxmi in a transparent plastic bag. No drinking water, no prasad, not even a pen to write.

After I checked in my main luggage I was told that there is five minutes left for boarding and it takes fifteen minutes to reach the gate! Just before security check, on time I realised that my beads could be taken away. So I put it around my neck like a necklace and folded the bead bag as tiny as possible and squeezed it into my coat pocket. My book was taken away! I begged that since it was a spiritual book they should not throw it away but scan it again and let me have it. Eventually I was told that I could go to the post office at the airport, get an envelope and stamps and post it. But that meant getting all that over to the security point as they would not allow me to take the book to the post office! Realising that the flight must be closing I then explained my difficulty [I did not even know how to find the post office in such a crowded mess], they eventually [by Krishna’s mercy] agreed to do it all for me, if I would give them a pound to cover the expenses. I scrawled a London address as quick as I could and thnaked them and ran to the departure gate. Fortunately there were many like me so the flight waited for us.

I had on flight my beads at least and I also managed to squeeze into my passport pouch the prayers of Lord Ramacandra to Nrsingadeva at Ahobilam. This carried me through. I thought now I would miss my flight from Munich to Moscow but by Nrsingadeva’s mercy, when we landed in Munich, there was a special vehicle waiting that transported me alone right to the airplane to Moscow. I asked him whether my luggage would also be transferred and he said, “Yes, but in another vehicle” I asked him again if he was sure and he said,”Yes, Senorita, off course, this is Munich in Germany!” I had no choice but to have faith in his words.

Imagine my joy when while standing at immigration in Moscow and praying that my suitcase does come, i saw it going round on the luggage belt.

Anyway, just wanted to inform devotees. The waiting and security check is tolerable at UK airports but you don’t want to lose your beads and books etc. so take care of preparing in advance.