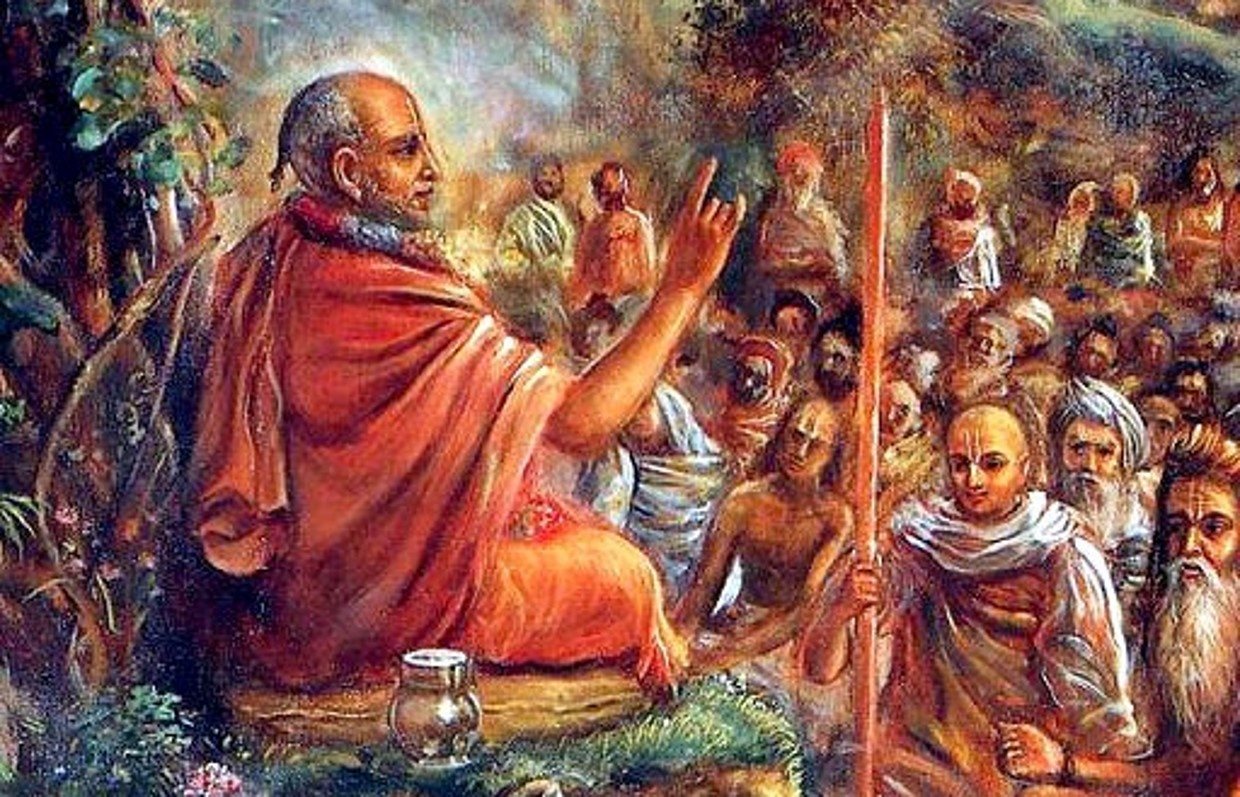 Srimad Bhagavatam is a literary masterpiece like no other. It is rich with sacred wisdom and is presented as an amalgamation of intriguing spiritual conversations. Thus, Srimad Bhagavatam reigns supreme in genres of spirituality, philosophy and devotion.
While Sukadeva Gosvami is the foremost speaker of the Bhagavatam, Pariksit Maharaja is its foremost hearer. Their conversation, the Srimad Bhagavatam, was presented by Suta Gosvami to the sages headed by Saunaka, at a forest called Naimisaranya. As
the sages asked questions about various spiritual subjects including philosophy of life, purpose of creation, nature of reality, God and His incarnations, humanity’s quest for happiness and so on, Suta Gosvami answered their inquiries based on what
he had heard from his guru Sukadeva Gosvami.

Spiritual knowledge is acquired by putting forward relevant questions in front of an experienced and realized speaker, and hearing the authorized answers with the intention to adopt the wisdom. Sravanam or hearing the Bhagavatam spiritually uplifts the
sincere audience who lends their ear in proper consciousness.

Grateful enthusiasm, genuine inquisitiveness and sincerity of purpose in the hearer, inspires the qualified speaker, and consequently extracts the nectar of the Supreme Lord’s glories from them. Such worthy exchanges become enlightening for humanity.
The sages of Naimisaranya delineate the essential qualities of a speaker and a hearer of the Bhagavatam in the following verse (SB 1.18.15).

An authentic speaker of the Bhagavatam is bhagavat-pradhana, one who keeps Lord Ksrna as the chief object of one’s love, and a credible hearer of the Bhagavatam is susrusatam, one who is very receptive and anxious to hear about the Lord. At the same time
the subject discussed between them is also characterized as harer udaram caritam visuddham, i.e. magnanimous and pure narrations about the Supreme Lord Krsna.

Respect for the Speaker

The sages welcomed and honored Suta Gosvami and offered him a seat of esteem. Being aware of his greatness, they praised his purity (saumya) and submissiveness (snigdha) to his gurus that enabled him to become well versed with the essential knowledge
of the all scriptures (SB 1.1.4-8). While appreciating the qualities of Suta Gosvami, the sages also exhibited those qualities and thus received the knowledge of the Bhagavatam from him.

It is not just intelligence or scholarship that enables one to comprehend the Bhagavatam, but it is simplicity and submissiveness to the guru that allows one to truly understand this great literature, which is non-different from Krsna.

The sages expressed their great enthusiasm to hear (susrusamananam) about the pastimes of Supreme Lord and His incarnations (1.1.13). They had deep faith (sraddadhananam) in the narrations of the Lord and the purifying potency of the process of hearing
His glories (1.1.17, 2.3.14). With such eagerness and faith, they attentively heard the words of Suta Gosvami and presented various relevant questions to further elucidate the subject matter. Their inquisitiveness about specific details of various
pastimes and philosophical subjects showed their veritable interest in inquiring from a worthy speaker. Thus, they timely and submissively raised questions to Suta Gosvami on various topics. In reciprocation, Suta Gosvami wholeheartedly appreciated
their eagerness to hear Krsna’s topics which alone can completely satisfy the hearts of everyone.

Srila Prabhupada writes, “Those who listen to the Bhagavatam may put questions to the speaker in order to elicit the clear meaning, but this should not be done in a challenging spirit. One must submit questions with a great regard for the speaker and
the subject matter.” (SB 1.1.5 P)

Faith in the Subject Matter

The sages had full faith in the process of hearing Hari-katha for the highest degree of spiritual emancipation. As Saunaka declared, “Any activity other than hari-katha steals away one’s lifespan with the rising and setting of the sun. Animalistic people
whose ears have never heard about Krsna are glorified by those people who are like dogs, pigs, camels and donkeys. Their ears are like snake holes. The tongues of those who don’t praise the Lord are like tongues of frogs.” (SB 2.3.17-20)

The sages were not looking for some spiritual entertainment through enthralling stories, neither were they speculative armchair philosophers. They were chaste and wanted to faithfully hear only those topics that related to the Supreme Lord Krsna and His
devotees (1.16.5-6). In so doing they were not dismissive of life stories of some historic personalities or activities of some devotee of bygone ages. So long the subject was related to the Supreme Lord or His devotees, the sages were keenly eager
to show it the same respect as they did to the direct topics of Krsna’s activities. They had full faith that only by hearing such topics can one be purified and delivered from nescience.

Thus the sages maintained very high regard for the devotees of the Lord. They eagerly heard about such devotees and themselves glorified Pariksit Maharaja, Sukadeva Gosvami and various other devotees whose topics Suta Gosvami was narrating.

Compassion for People in General

The sages were compassionate towards the entire humanity in general, and Kali yuga people in specific. For this purpose, they had earlier begun a thousand-year sacrifice for the welfare of all humanity. Upon meeting Suta Gosvami, the first question they
had asked him was, “What is the ultimate good for people in general?” Foreseeing the incompetence of the people in the present age of Kali to understand the vast Vedic scriptures, the sages had requested Suta Gosvami, “Please describe the essence
of all scriptures.” As an answer to their inquiries, Suta Gosvami had unequivocally announced: “Bhakti or unmotivated and uninterrupted loving devotional service unto Lord Krsna is the only ultimate good for all people and is the essence of all scriptures.”

Appreciating the compassionate nature of the sages, Srila Prabhupada writes, “Forgetful men do not know the right path for peace and prosperity. However, the sages know it well, and therefore for the good of all men they are always anxious to perform
acts which may bring about peace in the world. They are sincere friends to all living entities, and at the risk of great personal inconvenience they are always engaged in the service of the Lord for the good of all people.” (SB 1.1.4 P)

Gratitude for the opportunity

A sincere hearer of the Bhagavatam doesn’t ever take the opportunity to hear from a great soul for granted. They value such a glorious chance and are grateful for it at heart. They understand the superlative importance of their time and do not waste it
for superficial things. The sages expressed their gratitude to Suta Gosvami as follows:

“We think that we have met Your Goodness by the will of providence, just so that we may accept you as captain of the ship for those who desire to cross the difficult ocean of Kali, which deteriorates all the good qualities of a human being.” (SB 1.1.22)

No Satiation in Hearing

“We never tire of hearing the transcendental pastimes of the Personality of Godhead, who is glorified by hymns and prayers. Those who have developed a taste for transcendental relationships with Him relish hearing of His pastimes at every moment.” (SB
1.1.19)

Hearing Srimad Bhagavatam is of great significance to the spiritual lives of all bhakti-yogis. When such spiritual hearing is done in the right mood, following the footsteps of exemplary hearers of Krsna-katha, like the sages of Naimisaranya, one can
quickly elevate one’s consciousness and gradually come to understand Lord Krsna and His attributes.

Fulfilling our longing for love