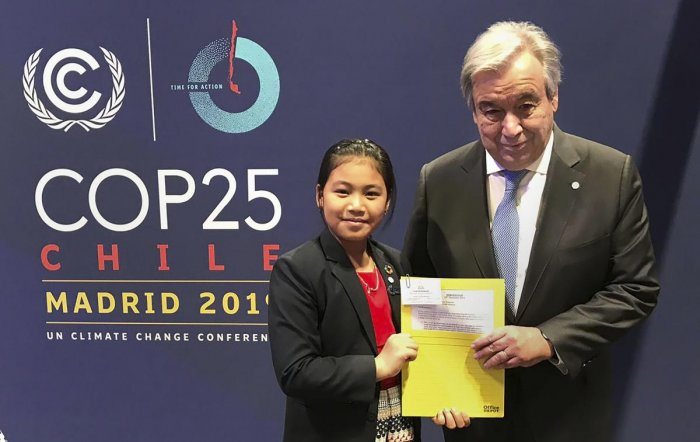 Because of your outstanding, selfless, activism, at a young age you have been awarded the Dr. APJ Abdul Kalam Children Award, a World Children Peace Prize, and an Indian Peace Prize. You have the potential to do unfathomable good for the planet in your lifetime. We believe your potential could be magnified by researching the wisdom found in the Vedic Scriptures.

For a global movement, we need global consciousness. This is described comprehensively in the Bhagavada Gita. Our real designation is neither Indian or European, man nor woman, young or old. We are the spark of consciousness, inhabiting different bodies. We share consciousnesses equally; therefore, it is the principal unifying factor. At the current time, this knowledge is greatly lacking in the Western world. One example is the ethnocentrism, which attempts to label you the “Greta of India”. The same fallacy might name Greta the “Licypriya of the West”.

Of course, we need names, but we should identify ourselves as members of a universal family. Krishna bhakti, loving service to God and the totality of existence, automatically brings one to this consciousness. This is not sectarian. Those who know God by other names, and serve Him with love, are on the same level. This love is an experience of unparalleled peace and satisfaction. Those in pursuit of it are not inclined to unlimited expansion of technology to improve material pleasure.

The pursuit of extravagant living is the history of technological society. It has created a big mess. The world is becoming consciousness of this. But it seems most of the proposed solutions are boxed into a view which sees no alternative to a technological world. They seek to solve the problems created by technology- with more technology.

Technology has certainly improved human life in certain fields; medicine for example. But the complete entwining of technology and economics has created an unsustainable situation. Colossal green enterprises (wind, solar, hydro, and nuclear energy) are not sustainable indefinitely. Comprehensive remedies for environmental problems need to move toward natural living. By natural living we mean things like plowing fields with bulls and using horses for rapid transit. On the ecological level this is the healthy niche for the human species. Many such societies have flourished with ample resources for human life. They have been replaced by societies with economies dependent on technology. This must change.

I will substantiate my claim with a few straightforward examples. Regarding economics: In the U.S.A., the great depression of the 1930’s came shortly after farming was mechanized. Massive amounts of workers had been displaced; yet ample grain was produced by a few farmers. According to the law of supply and demand the wheat was worth nothing. The stock markets were disrupted. The economy was adversely affected, not by scarcity but by abundance. This shows us that when technology facilitates production of all necessities, while employing a small amount of people, the economy can only survive by creating artificial needs. In this time period, WW2 pulled the U.S.A out of the depression by creating a dire need for goods.

The changes proposed by present day, popular, activists (a world powered by green technology), seem to ignore this fundamental problem. Although the negative effect will be less than burning of fossil fuels-wind, solar, nuclear, and hydro energy also consume land, decrease biodiversity, and have negative by- products. In a few centuries, the increased consumption required to keep green energy economies going will, again, create an overwhelming burden on the environment.

Regarding ecology: We now have knowledge about the delicate balance required. Disruption of seemingly benign factors create large scale problems. Many of these would have been virtually impossible to predict. We must be wary about the unforeseen disruptions to ecosystems from alternative forms of energy. These are likely because we will still have a technological society, and this is contrary to the niche humans are meant to inhabit.

We will give an example of a problem created by unnatural technological society which would have been impossible to predict. (I can supply a comprehensive review of, peer reviewed, research from academic databases to substantiate this). The rate of auto immune diseases has skyrocketed in recent decades. This is due to newborns not being exposed to farm animals, and their byproducts. In these diseases, the immune system attacks its own body. These create vulnerability to other health hazards, and are substantial in themselves; but at least the brain is spared by the “blood brain barrier”. However, the placenta in women with autoimmune disease does not block “anti- brain antibodies” from the embryo. This causes autism and other neurological conditions in the children. Sharp increases in these conditions did not exist when humans lived naturally, and exposure to cows and horses was common- even in urban settings. No one could have predicted that lack of exposure to these animals would create the health problem described above. If we do not return to natural living these problems are likely to persist. Untold other health issues are plausible due to disrupted ecology.

You may have contentions with these assertions and a dialogue may increase mutual understanding. But our main objective is to encourage you to explore the Vedic text yourself. It will likely expand your vision, and ability, as an activist for the good of the entire world. Please give it a try. We follow the Vedic Scripture translated and commented on by the foremost scholar in the field, ISKCON Founder Acarya, A.C. Bhaktivedanta Swami, Srila Prabhupada. By Vedic Scriptures/ Text this is what we are referring to.