A police officer from Durban becomes a devotee of Krishna 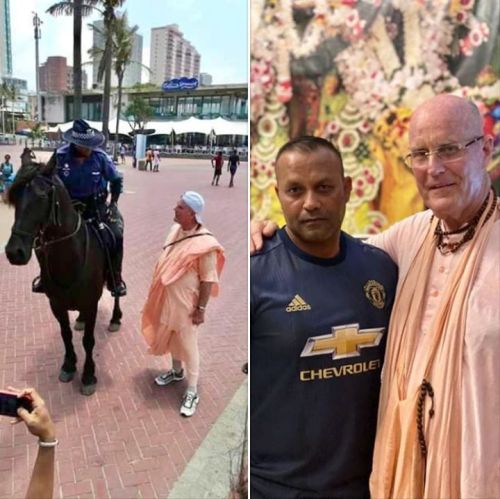 A police officer from Durban becomes a devotee of Krishna.
Indradyumna Swami: The photo on the left is from several years ago. We were in Harinam on the Durban beachfront. This police officer on horse stopped me and asked what it was all about. We talked for quite some time as he became more and more inquisitive. Before parting, I gifted him a large size Bhagavad Gita.
Yesterday, on Lord Nityananda’s appearance day, I gave the lecture at the Sri Sri Radha Radhanath Temple, just outside Durban. After my talk this gentleman approached me and thanked me for the talk – and for making him a devotee. It turns out he was the policeman on horseback whom I had given the Bhagavad Gita to as a gift. He said he was convinced about Krsna Consciousness just by reading the Gita. He chants japa each day and is a member of the congregation … and still patrols the beachfront on his horse! All glories to Srila. Prabhupada!

Grand Sankirtan procession through the town of Vrindavan (Album of photos)
Open Letter to Licypriya Kangujam
Tagged under: Nectar