Do mystical dreams play an important role in Gaudiya-Vaishnavism? This is a very important topic and in this essay an attempt will be made to outline several points for consideration.

It is the general understanding of most spiritual authorities that dreams are a conglomeration of past and current impressions (samskaras) which we have gathered from the external world via our senses in an unconscious or conscious manner. Furthermore, dreams are often made up of sense objects, ambitions, future goals etc. that we cultivate or contemplate via our minds eye (intellect, ego, mind) in the waking state.

That being said, when it comes to certain circles of vaishnavas, it has become the notion that dreams hold little value, if any at all. Even dreams that seem to be completely spiritual in nature!

For the most part, this seems like an accurate assessment. For instance, for a conditioned soul, the majority of their dreams will certainly be highly unimportant. To wake up and shake off all of the nightly hallucinations is probably the best course to take. To dwell on all of these karmic impressions as if they “symbolize something” very pressing in ones life would just drive a person insane with speculation.

A better approach to all these hallucinatory dreams/nightmares would be to just execute bhakti-sadhana and engage in nama-kirtana incessantly. These practices will clear us of all karmic situations past and present. There is no better practice for ridding ourselves of these influences on our psyches.

But what if one has a dream that is “extraordinary?” Like receiving a spiritually potent teaching (that is in accordance with the sacred scriptures) in a dream from a divine personality, or even the Supreme Godhead Himself in one of His forms? What if this “dream” seems to be completely different in nature (lucid-like) to that of an ordinary mundane dream (made up of tamas, rajas, and sattva) that one is normally accustomed too? Furthermore, what if one experiences something so saturated with supramundane experience that ones heart radically changes and their enthusiasm to perform bhakti-sadhana intensifies many fold? Should a dream like this be considered nonsensical or unimportant? Or should it be written off as mere “mysticism” which is a hindrance to the culture of bhakti?

It is the opinion of some that all these things are unimportant. One famous Guru (name omitted out of respect) was “quoted” as saying, “If you are always thinking of/serving the Guru (or Krsna), than why do you have to see/serve them in a dream?” It is certainly an interesting statement and personally I think it seems to be highly contextual to the situation in which he spoke it.

For instance, maybe he wanted to impress upon that disciple that he should just focus on the practicality of serving the Guru and always chanting Krsna’s names. That faith and service should be cultured towards the guru and Krsna in all circumstances. This is certainly true. Yet, if we look into the words of other acharyas and the sacred scriptures we can get other angles of vision as well.

For instance, Srila A.C Bhaktivedanta Swami Prabhupada and Hayagriva Dasa once had a conversation regarding dreams:

“The intelligence of the devotee who has attained bhava is incessantly fixed on attaining his sole cherished goal. In each of the three states of consciousness- wakefulness, dreaming and deep sleep – he remains a traveller on the path of constant remembrance of Sri Bhagavan.”

Even though we are not at the “bhava” stage of bhakti, still this idea can be applied to our current situation. For instance, as we advance in our remembrance of Sri Krsna in our waking state, naturally those impressions and thoughts will enter our subtle body and spill over into our dreams. In other words it means that our “external/internal” krsna-bhakti is effective and is actually purifying our finer subtle body. The more that happens, certainly we know we are making spiritual progress.

In addition to having dreams that seem to be “signposts” of progress for our bhakti, there are also dreams that are rather pure mercy alone. In other words they are very special visions of Sri Krsna or a saint that one has received, regardless of their spiritual qualifications. They are a type of causeless mercy so to speak. These types of dreams practically always alter the course of a devotee’s life for the better.

As a final point, we should consider the lives of so many acharyas. Practically speaking, the majority of the previous acharyas biographies are full of stories of revelations, visions, and teachings that they received within dreams. These accounts are so vast in volume that if we compiled them all, a decently sized book would be manifested.

Yet a few of them will be provided below for evidences’ sake.

First, lets take a look at a dream that Srila Bhaktisiddhanta Saraswati Thakura Prabhupada had when he was at a very pivotal moment in his life. He had just recently lost the physical association of both of his gurus, and was feeling incapable of setting forth the preaching mission that Srila Bhaktivinode Thakura envisioned for him. 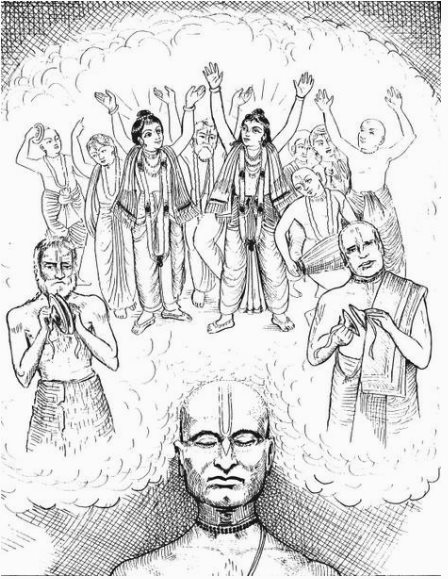 He lamented in the following way, “How can I convey to the inhospitable world the pure teachings of Śrī Caitanya and establish the mano-‘bhīṣṭa of my gurus?”

“Shortly afterward, one night at the Yogapīṭha, in a dreamlike revelation he saw approaching him from the east the Pañca-tattva, the Six Gosvāmīs of Vṛndāvana, Śrīla Jagannātha dāsa Bābājī Mahārāja, Śrīla Bhaktivinoda Ṭhākura, Śrīla Gaura Kiśora dāsa Bābājī Mahārāja, and numerous other great devotees of Lord Caitanya. They told him:

“Sarasvatī! Why are you worrying? Begin the task of establishing śuddha-bhakti. Distribute Gaura-vāṇī universally. Expand service to Gaura-nāma, Gaura-dhāma, and Gaura-kāma. With unbreached enthusiasm broadcast bhakti-siddhānta. We are eternally with you, ready to help. The support of unlimited people, immeasurable opulence, and boundless scholarship awaits the blessing to serve your mission. All will manifest when required. Come forward with full strength to distribute the message of Mahāprabhu’s prema-dharma throughout the globe. No worldly hindrance or menace will be able to obstruct this undertaking of yours. We are forever with you.” – Sri Bhaktisiddhanta-Vaibhava

Not only did he take this dream seriously, but he took it as a direct message from Sri Krsna Chaitanya and his gurus. If he considered it anything less and didn’t act on it, it is very possible that most of us would not be reading this essay today. Many similar stories are found within almost all authorized biographies of the gaudiya saints.

Interestingly enough, it was in a dream of Lord Jagganath that Srila Bhaktivinode Thakura was instructed to worship Bimala-devi in order to receive a “Ray of Vishnu” as his son. From “Sri Bhaktisiddhanta-vaibhava”:

“I didn’t bring you to Purī to execute legal matters, but to establish Vaiṣṇava siddhānta.” Śrīla Bhaktivinoda Ṭhākura responded, “Your teachings have been significantly depreciated, and I lack the power to restore them. Much of my life has passed and I am otherwise engaged, so please send somebody from Your personal staff so that I can start this movement.” Lord Jagannātha directed him to pray to the deity of Bimalā-devī.”

As we can see, this was a similarly monumental moment for an acharya that seems to have greatly rested on the power of a dream.

Furthermore, to make things even more “authorized,” in Sri Chaitanya-charitamrta and Sri Chaitanya-bhagavata, there are dozens of stories that involve dreams. However, since increasing the volume of this essay is not necessary, we will just provide two such stories.

One time, a poetic scholar and devotee of Goddess Saraswati was “outdone” in logic by the young Chaitanya Mahaprabhu. The poet was struck by wonder at how this could be possible (because previously he alone considered himself to be the abode of Goddess Saraswati’s empowerment.) That night he had a wonderful dream. Here are the verses that pertain to that:

“In a dream the goddess informed him of the Lord’s position, and the poetic champion could understand that Lord Caitanya Mahāprabhu is the Supreme Personality of Godhead Himself. The next morning the poet came to Lord Caitanya and surrendered unto His lotus feet. The Lord bestowed His mercy upon him and cut off all his bondage to material attachment.” – CC Adi-lila 16 106-107

In a similar way, we see in Sri Chaitanya-charitamrta Madhya-lila chapter four that Sri Madhavendra Puri also received detailed instructions from Sri Gopal via a dream. In many ways, this event and its effects are a major “cornerstone” of Vrindavan-dham even today.

In essence, Sri Gopala appeared to feed Madhavendra Puri some milk. At the time of receiving the milk, Madhavendra Puri did not understand that the boy was in fact Sri Krsna Himself. But upon falling asleep at the end of the night, Gopala directly revealed Himself to Madhavendra Puri. Here are the relevant passages:

“Mādhavendra Purī could not sleep. He sat and chanted the Hare Kṛṣṇa mahā-mantra, and at the end of the night he dozed a little, and his external activities stopped. In a dream Mādhavendra Purī saw the very same boy. The boy came before him and, holding his hand, took him to a bush in the jungle.

The boy (Gopal) showed Mādhavendra Purī the bush and said, “I reside in this bush, and because of this I suffer very much from severe cold, rain showers, winds and scorching heat. Please bring the people of the village and get them to take Me out of this bush. Then have them situate Me nicely on top of the hill. – CC Madhya 4.34-37

Seeing these stories, the question arises, “Why did Sri Chaitanya/Sri Krsna orchestrate these events to unfold as they did within dreams? Couldn’t He have just as easily shown His Divinity to the poet/Sri Madhavendra Puri directly?” The answer is yes, He could have, but by these lilas it becomes clear that for some reason the Lord sometimes decides to give revelations to devotees via their dreams.

In conclusion, it seems dreams of Krsna and the guru are not only not important, but can be exceedingly valuable in accordance to the intensity of the dream. They can be conduits for important instructions and revelations, as well as just indications that our bhajan is moving forward in a progressive way.

If someone is unable to discern the difference between a purely spiritual experience (in a dream) from a material dream, then it would seem advisable to always seek counsel in this regard. But factually speaking, if something is so transformational, then the devotee will not be confused about what they experienced.

The sweet lilas of Balagopala