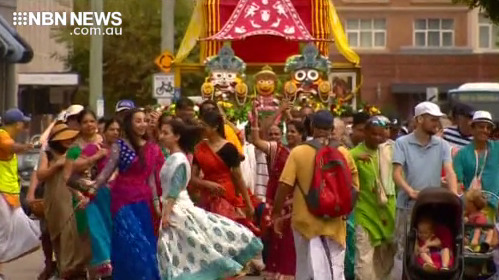 Previously, Ratha Yatra in this area was part of a larger council-organised parade called the Mattara parade. Then after a gap of nearly 10 years, with the mercy of Lord Jagannath, Lord Balarama and Lady Subhadra, an independent parade was possible this year, with the hope that this will continue on a yearly basis.

The parade was well-attended, and over 300 plates of prasadam distributed to joyful attendees.

Here’s the coverage on the local news channel.
———
Newcastle ( Australia) Rathayatra is now on NBN news!
Hare Krishnas are known the world over for their messages of love and happiness – but it’s been more than a decade since they’ve hitched their wagon through the streets of Newcastle.

Today, the world’s oldest street procession returned to Newcastle – and as we found out, they’ve lost none of their shine.
Watch it here: https://is.gd/XbT2X0

Radhanath Swami: Prajalpa (gossip)
We have our plans and Krishna has His plans! (video)
Tagged under: Nectar