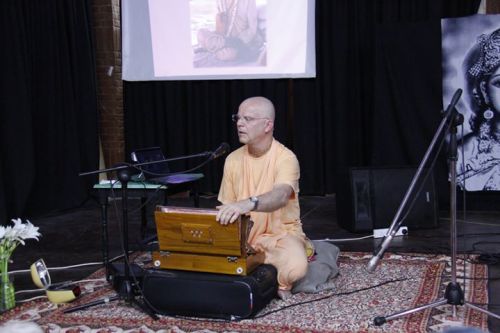 New Release – New Extended Songbook.
HH Bhakti Gauravani Goswami: This a songbook that I prepared in the last two years.
Here is the link to a website where you can find all the information, a link to request paper copies, a link to download the book in e-book format and a link to download the mp3 files that accompany the songs. https://www.sacredsongsymphony.com/
Combining Philosophy & Music
From the very beginning of my devotional life, I had been intrigued by the bhajans that were sung in the temple. Sanskrit and Bengali seemed to be designed for glorifying Krishna. The combination of philosophy and music was fascinating. Over the next couple of years, I made myself familiar with many of the songs that our predecessor acaryas had composed, and I wanted to share them with others by combining sound with sight to enhance the experience. In those days a slide projector would have to do, involving many hours of preparing appropriate photographs, often taking close-ups from the paintings in Prabhupada’s books. That was in 1975, decades before computers would make audiovisual presentations a breeze.
Times have changed. With the advent of the digital age, the combination of images and sound has become as easy as can be. During the last decade (2010-2019), wherever I was invited to preach, I used to give PowerPoint Seminars about the songs of the Vaisnava acaryas. When participants approached me afterward, asking for CDs with the songs that we had studied, I had to disappoint them. There were none.
The requests did not stop and finally, in 2017, I began to contemplate how to go about it. I did not want to simply record some songs. That I had done in the past and, at any rate, there were already so many recordings by so many devotees available. If I were to embark on such a project, it had to be different. I wanted people not just to listen to the songs, I wanted them to imbibe the meaning and become inspired and encouraged to sing these bhajans themselves.
Each song needed a choir, who would invite the listener to sing along with them. And a songbook was needed that would offer more than just the transliterations and translations. Our Vaisnava songs are a treasure house of transcendental knowledge, and Srila Prabhupada was very much familiar with its contents. He used to quote from the acaryas’ songs hundreds of times in his books and lectures. The reader/listener should hear Prabhupada speak, and to this end, I have included in Sacred Song Symphony quotes for almost each of the 108 songs.
Digital recording has many advantages over analog technology, one being the tremendous flexibility it offers. Many devotees collaborated and lent their voices for the choirs, but the more the merrier. I would love to see the choirs grow, and expand the synergy more and more. 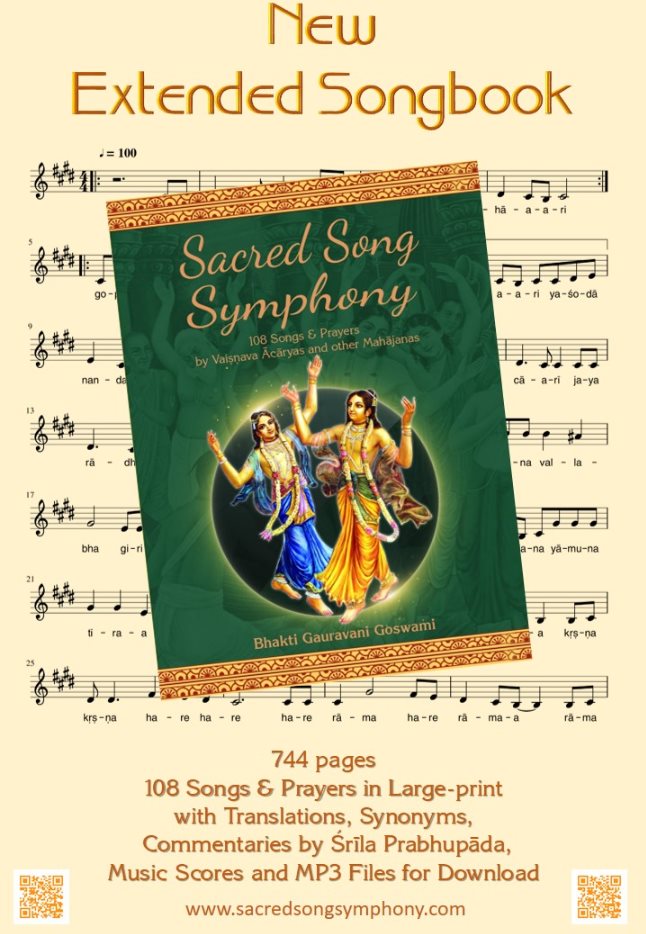 SP: As much as possible try to increase our preaching programs by using all the mass media which are available!
Hon'ble Chief Minister of Bihar and Deputy Chairman Rajya Sabha Parliament House visited ISKCON Delhi Temple. (Album of photos)
Tagged under: Nectar