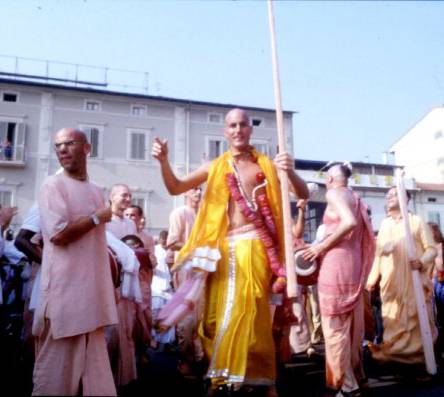 After my unsettling experiences in the San Diego and Vancouver airports, where I was interrogated by security officials, I again considered wearing non-devotional dress while traveling in the United States.

Airport security measures have been heightened throughout the country because of terrorist threats. Passengers who arouse suspicion are often subjected to extra searches, and there is concern that people of various racial, ethnic, religious, or national groups are being singled out. And no doubt, the flowing saffron robes of a sannyasi draw attention.

But I decided against changing my dress. “Experience has shown that the advantages of wearing my robes far outweigh those of pants and a shirt,” I thought, “if only because of the number of people who approach me to ask about spiritual life.”

My decision was to be greatly rewarded. Two weeks into my tour I checked in for a flight from Boise, Idaho, to Salt Lake City. Sure enough, I was pulled aside for a special search while going through security.

“Stand with your legs spread and your arms out to the side while I do a body search,” said the officer.

Starting from my arms his hands slid down to my waist. “Is this sheet tied on tight?” he asked.

“Just thought I’d ask,” he said. “The last time I patted down one of you guys the sheet fell off. He was standing there in the strangest underwear I ever saw.”

After the pat-down he led me to a table to search my hand luggage. “Actually, I’d like to ask you a question if I could,” he said softly as he started to open my briefcase.

“No problem, officer,” I said. “That’s what you people are supposed to do. I appreciate these security measures. They keep us safe.”

“No, I mean another kind of question,” he said, looking around to make sure no one was taking notice.

“You’re a spiritual person,” he continued, “and you look so happy. Can you tell me why I’m suffering so much in life?”

“Well, sir,” I said, “Suffering will always be there in material life. You can alter it somewhat, but you can’t change the fact that we all get sick, grow old, and die. You have to go within and discover your spiritual self, which is eternal and full of knowledge and bliss.”

“What does the spiritual self look like?” he said as he picked up my printer.

“We’re spiritual beings,” I said, “with a spiritual body and spiritual senses and emotions. That body is eternal. It never grows old.”

He looked up. “Does God really exist?” he said.

Just then another security officer called out. “Hey, Bill,” he shouted, “is there a problem? What’s taking so long?”

“No problem,” Bill yelled back. “Just double checking.” He then looked at me for the answer to his question.

“Of course God exists,” I said, “and you can see Him. But you need the necessary qualifications.”

“Which are?” he said as he slowly continued going through my things.

“Bill,” the other officer shouted, “move that person on! The line is backing up here!”

Bill was obviously taking his time so he could ask me questions.

“What is the qualification for seeing God?” he said.

“But how to… ” he started to say, when the other security officer walked over.

“Bill,” he said, “does this gentleman pose a security threat?”

“Then move things on,” said the officer.

“I wanted to ask him one more question,” said Bill.

“Then ask,” said the officer.

“I mean about life,” Bill said.

The officer stared at him for a moment. “Bill, this is not the place,” he said.

The officer turned to me. “You can go now, sir,” he said.

“Back to work,” the officer said sternly.

“Can I give him my card?” I said to the officer as I started to walk away.

After walking twenty meters, I looked back to see Bill getting a scolding. I headed to the departure gate still thinking about him when a young woman came up to me.

“Do you have any literature?” she said with a big smile. “I’ve always wanted to know something about your faith.”

The card I had wanted to give Bill was still in my hand, and I gave it to her.

By dint of my frequent flyer points, I was traveling business class. Twenty minutes into the flight, a woman walked up to the aisle next to my seat.

“Are you a Buddhist?” she said.

“I’m a Buddhist,” she said. “Can you tell me the difference between Hare Krsna and Buddhism?”

The man seated next to me put down his Wall Street Journal to see what was happening.

“The basic difference is that Hare Krsna accepts the absolute truth as a person,” I replied. “Buddhism states that ultimately everything is void.”

The man went back to reading his newspaper.

“A number of things,” I said, “beginning with our belief in reincarnation.”

“Just a minute,” she said and turned to the man next to me. “Sir,” she said, “do you think you could change seats with me? I’d really love to talk to this monk.”

The man lowered his newspaper. “Are you in business class?” he said.

He looked at her incredulously. “It would mean a lot to me,” she said. “Please. I need some spiritual association.”

He still couldn’t believe what he was hearing.

“I really need this,” she said.

The man thought it over. “All right,” he said to my surprise, “if it means so much to you.” He gathered his things and taking her boarding pass walked to her seat in economy.

She sat down next to me. “So,” she said, “you were saying something about reincarnation?”

We then discussed the differences between Vaisnavism and Buddhism throughout the ninety-minute flight.

At Salt Lake City I was walking through the airport to the baggage carousels when a woman stopped me.

“Excuse me, sir,” she said, “may I ask what faith you are practicing?”

“I’m from the Hare Krsna movement,” I said. “I follow an ancient spiritual tradition from India.”

“I see,” she said. “And is there a special significance to the clothes you’re wearing?”

I smiled. “Yes, there is,” I said. “We dress like this so people will ask us questions.”

“Seriously,” I said, “One’s outer appearance reflects one’s inner nature. Before becoming a monk I led a degraded life. My dirty and unkempt clothes were an indication of my unclean heart. Now I’m striving to understand God, and these clothes are a sign of my pure intentions.”

“Beautifully put,” she said. “Are you going to visit the Mormon Temple in Salt Lake City?”

“Visit Brigham Young University, too,” she said. “Most of the students are nice young Mormons.”

As I struggled with my hand-trolley up some steps to another level, a young man behind me put his hand on my lower back and gently pushed me up.

“Thanks a lot,” I said when we got to the top of the stairs.

He laughed. “Figured it’d get me some kudos from above,” he said.

While I was waiting for my bags at the carousel, a woman in her fifties approached me. “You’re American, right?” she asked.

“But you’re following an Eastern path. Why is that?”

“This tradition answered all my spiritual questions,” I said.

“And how many years have you been practicing?” she said.

I had to think for a moment. “Forty years,” I said.

“Forty years!” she exclaimed. She lowered her voice and leaned closer. “And have you been faithful all those years?” she said. “Are you keeping your vows?”

“George!” she called out to her husband waiting at the baggage carousel. “Bring me twenty bucks.”

Her husband reached into his pocket, walked over, and handed her a twenty-dollar bill. The wife put the money in my hand. “Keep up the good work,” she said and walked away.

I spent four wonderful days with Caru das and his wife, Vaibhavi dasi, at their temple in Spanish Fork, south of Salt Lake City. The night before leaving, I received an e-mail from the US State Department. It must have been sent as a result of the number of times I’ve been taken aside for screening in airports.

“We are reaching out to your organization on behalf of the US Department of Homeland Security to obtain information about issues or concerns regarding religious expression or exercise during airport security screening. For example, do individuals of your faith who wear religious dress believe they are treated differently in the airport screening process because of the clothing they are wearing or religious symbols they possess? Your assistance in helping us address religious exercise and expressions issues at airport security is welcomed.”

“It appears that I am sometimes singled out for screening because of my religious dress. But I have no complaints. Considering the apparent threat of terrorism in our country, such security measures are acceptable. What’s more, it gives me an opportunity to share my faith with all of you.

The next morning I took a flight to Dallas, Texas. I was seated next to a gentleman who was absorbed in reading what appeared to be the Bible. When he put it in the pocket of the seat in front of him I asked if I might borrow it to read for a while.

“Fine,” I said. “I’m always interested in learning about other faiths.”

“Me too,” he said gently. “Do you have a copy of the Bhagavad-gita?”

“Well, no I don’t,” he said. “But I know it’s the scripture of the Hare Krsnas, and from your dress I can see you’re a Hare Krsna.”

With that exchange began a pleasing, in-depth discussion about religion that lasted the entire two and a half hours till we arrived. As the plane was landing, the gentleman smiled. “You can keep the book,” he said.

It was large and ornate, obviously a special edition. “Thank you,” I said. “I consider it a very special gift. If you give me your business card, I’ll send you a Bhagavad-gita.”

“I’d be honored,” he said as he handed me his card.

That evening I looked at the gentleman’s card. My eyes opened wide as the bold letters at the top jumped out at me. It read:

“In the country known as Mayuradhvaja, the lower-caste people who are considered less than sudras are also initiated in the Vaisnava cult of devotional service. And when they are properly dressed, with tilaka on their bodies and beads in their hands and on their necks, they appear to be coming from Vaikuntha. In fact, they look so very beautiful that immediately they surpass the ordinary brahmanas.”

[The Nectar of Devotion, Chapter 5]

The Mood of the Day

A History of Discontent