For the Benefit of Everyone 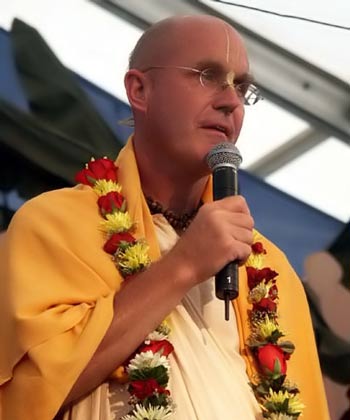 “For the Benefit of Everyone”

Amritananda dasa and I were on our way to set up a festival when we stopped at a car lot in Trzebiatow to look at a truck. We were greeted by the owner of the lot, a man in his 70s.

“You have not been here for a long time,” he said. “For years you held your festival every summer here. Then you stopped, and you started doing them nearby, in Mrzezyno.”

“More people,” I said quickly. I was anxious to see the truck and get to the festival.

“Do you know how much the people of Trzebiatow miss your festivals?” he said. “We’re a small country town, and nothing ever happens here. Your festivals were the highlight of the year for us.”

Suddenly the truck wasn’t important any more. “How could I be so callous?” I thought. “How could I not reciprocate with this man’s interest in Krsna consciousness?”

We spoke for a while, and after a brief look at the truck, the three of us walked back to the van. “I’ll be at the festival in Mrzezyno tonight with my granddaughter,” the man said. “She’s ten and has been going to your festival since she was five.”

As we drove away, I thought about how a devotee should never be so busy that he can’t address someone’s interest in devotional service to the Lord. Sharing Krsna consciousness is the very essence of a devotee’s life.

“After all,” I thought, “it wasn’t so long ago that I was also in forgetfulness of the Lord. Had Visnujana Maharaja not taken the time to preach to me, where would I be now?”

I thought of a passage from Sri Caitanya Caritamrta:

“Although Vasudeva Vipra was a leper and had suffered greatly, still Sri Caitanya Mahaprabhu cured him. The only return the Lord wanted was that Vasudeva preach the instructions of Krsna and liberate all human beings. That is the process of the International Society for Krsna Consciousness. Each and every member of this Society was rescued from a very abominable condition, but now they are engaged in preaching the cult of Krsna consciousness.”

When we arrived at the festival site in Mrzezyno I was surprised to see that the stage crew and tent crew had not yet begun setting up. Then I saw Nandini dasi talking nearby to some frowning men.

“What’s happening?” I asked a devotee.

“The shop owners in the area don’t want us to set up the festival here,” he said. “They say it detracts from their sales. They’ve blocked our semi-trailer from entering the area.”

Although it was getting late, I decided not to intervene. I would let Nandini handle the situation. Negotiating under pressure is her forte.

After an anxious half hour she came over to speak to me.

“Guru Maharaja,” she said, “they are adamant about not letting us use the same spot we had last year. It blocks the view of their stores. Although we legally have permission to set up where we want and could force the issue, I don’t think it would be wise. These people will be here every year and become more and more antagonistic. I suggest we compromise.”

My initial reaction was one of anger and a desire to assert our rights, but when I heard Nandini’s cool-headed suggestion, I calmed down and agreed. Our willingness to cooperate softened the hearts of the store owners, and they suggested a spot nearby. Coincidentally, it faced their stores, making them appear to be part of our festival. Later that evening, I visited one of the stores to buy some fruit.

“How’s business?” I asked the owner.

He smiled. “Better than ever,” he said.

By the Lord’s arrangement, the new location proved to be better for us than the other one, and the preaching too was better than ever in Mrzezyno.

During the festival, I complimented Nandini on her diplomatic handling of the affair, as even a devotee must sometimes use diplomacy:

I have often seen devotional service soften a person’s heart, as the hearts of the storeowners were softened, and such transformations deepen my faith in Krsna consciousness. In fact, I live for such moments because for me they are manifestations of Gaura-sakti, the internal spiritual potency of Lord Caitanya Mahaprabhu. They are the reward for whatever austerities a preacher goes through in spreading the teachings of the Lord.

Another case came later in that evening.

As always, thousands of people came to the event. At the end, when we were having the final kirtan, I noticed Nandini sitting and talking with a gentleman. Even the roar of the kirtan and the fact that 100 children were dancing with us, causing a cloud of dust to rise above the festival, didn’t disturb their conversation. Only when we had finished and most people had left the festival grounds, did Nandini and the man finish and say goodbye.

I asked Nandini about the man. I could see that she had been touched by Lord Caitanya’s mercy upon a fallen soul of Kali-yuga.

“He’s in charge of cultural affairs in Trzebiatow, nearby,” Nandini said. “He helped us get permission and organize our festivals there for years. He was sad that we don’t hold them there any longer.”

I thought of the elderly man at the car lot. “Yes,” I said, “I know someone else in Trzebiatow who feels the same way.”

“Well,” said Nandini, “This gentleman said he remembers how we shared many things about Krsna consciousness with him over the years. ‘I was always listening to you,’ he told me, ‘but nothing really made sense to me at the time.’

“Then several months ago, his mother was diagnosed with terminal cancer. He was devastated. He had no one to turn to for solace. Watching his mother die, he said, was the most agonizing time of his life.

“Then suddenly, he began remembering little bits and pieces of the knowledge we had given him in personal discussions and at the festivals. ‘I remembered about karma,’ he said, ‘and reincarnation and the temporary nature of this world and the reality of the spiritual world.’ It all worked like a balm to sooth his suffering soul, he said.

“As the days went by and the situation became tense, he said he found himself becoming calmer and reflecting on the wisdom we had shared with him. When his mother finally died, it was painful for him, but he was able to tolerate it. He told me, ‘I came here today to thank you for the spiritual knowledge you gave me.’

“I told him that we were happy to share with him what had also saved us. I wanted to reciprocate with him for all he had done for our festivals in Trzebiatow, so I took him to the gift shop to give him some presents.

“When he realized what I was doing, he said, ‘The real gift you can give me is not in here.’

“Then he took me outside the gift shop and to the book table. He picked up a Bhagavad-gita and said, ‘This is the best gift anyone can receive.’

“Then, to my amazement, he picked up a set of japa beads from the table. ‘This too,’ he said.

” ‘I have to reciprocate with your kindness in a spiritual way,’ he said. ‘The little I have learned has helped me so much. I can only imagine how much there is to be gained by going deeper.’

“With that he left a donation and walked back to his car. I am amazed, Guru Maharaja, how this festival program is changing the hearts of so many fallen souls.”

“I am too,” I replied, shaking my head. “There must be many similar stories among the thousands of people who come to our festivals. Let us pray for the privilege to be engaged in this way for many years to come. Such festivals are the desire of the Lord and His pure representatives, who long ago chalked out a plan to flood the world with the ocean of love of God.”

That evening, before I went to bed, I came upon a passage in Prema Vilasa, by Sri Nityananda dasa:

“‘Both of you take permission from your spiritual masters before departing for Bengal with the books,’ he said.

“Lokanatha Goswami said, ‘What you are about to do is the perfection of everything I have taught you. Remember to practice renunciation; do not use perfumed oil or other luxurious items. Eat simply – and only once a day.

” ‘Serve the Vaisnavas with the same love and devotion you serve Krsna. Remain always vigilant and avoid offenses while rendering devotional service.

” ‘And most important, perform sankirtan and hold grand festivals for the benefit of everyone. That is my order.’ ”

www.traveling-preacher.com Official website for Diary of a Traveling Preacher

One Response to “For the Benefit of Everyone”