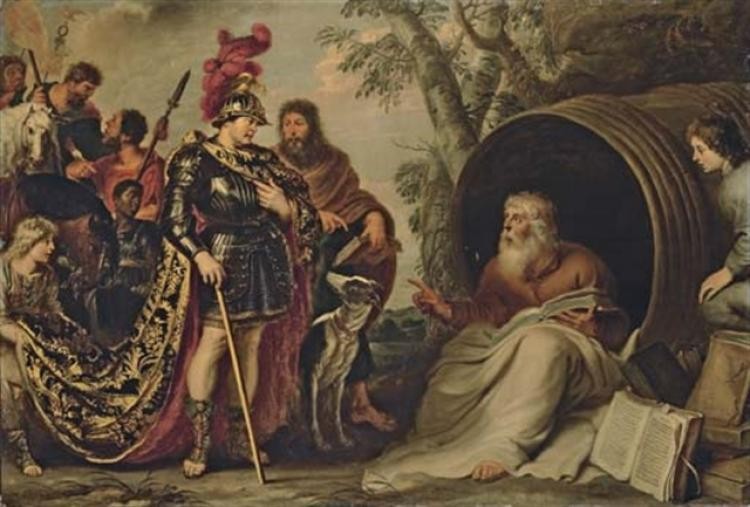 Sixteenth chapter of Bhagavad-gita denote godly and above all demoniac qualities – daivasura sampad vibhaga, which are to be found in a man’s heart. One of the human quality is cynism.

I was curious, where Krishna describes that in sixteenth chapter, so simply that it belongs to godly or demoniac character qualities? Nowhere. It took more effort to figure it out. Apropos, if we would make an public inquiry questioning, “How do you fancy a demon?”, common answer would be, “… a fairy- tail-ish hellish creature with fur and horns on its head, eating human flash, bad and mischievous.” Krishna does not describe it that way, except for that mischievousness (kruran). He leaves out outside look, but focuses on character and enumeration of dirt in the heart.

I took an advice from monolingual dictionaries. It says that cynic is a person, which believes that human dings are all motivated by selfishness only, and that cynic is a person with pessimistic view of human character or said in just the opposite manner, it is a person who has very little faith in virtue and good nature of others. With these definitions we are much closer to what Krishna has to say and there are plenty examples of cynics in recent history.

As we can see it is not a philosophical category, but a faith conditioned by impure state of heart so peculiar for so called modern man. It is the one widespread present day illness, step by step everyone is considering to be normal state, to be necessary evil. Cynicism is a mixture of demoniac (asura) qualities (sampad) described in sixteenth chapter of Bhagavad-gita. All these qualities are in varying proportion present in demoniac person. It is nothing unusual. We see those around in others and in ourselves. All contemporary humans, more or less, suffer from these bad qualities.

About Czechs it is said that they posses cynical humor. Indeed, one of the biggest cynic, who mercilessly murdered millions of innocent men, women and children in concentration camps and in other ways, considered Czechs to be “smiling beasts”. Yes, it is a way the Czechs exhibit their cynims. No worry, cynism could be found in any nation. Americans are roughly and toughly cynical, ever ready to dispatch you and prove their superiority above all they survey. So called Indian sadhus are cynical too. In one moment they take all your hopes for genuine spiritual revival by saying that there is no problem at all, because everyone is god, and all paths lead to the same goal. It is not about nations, but the character matters.

It begun with Krishna separating demons from devotees. Cynic is almost like synonym for a demon. How is that? asatyam apratistha te jagad ahur anisvaram aparasparam sambhutam kim anyat kama-haitukam Bg. 16.8 They say [the demons] that this world is unreal, without substance and no God in control. It is rumored it originated from sexual lust only. That is the root of manifestation of cynism. That is the source, from which it sprawls out. The very next verse indicate the fruits of such atheism, which leads to cynism. That I will come to presently. etam drstim avastabhya nastatmano ‘lpa-budhayah prabhavanty ugra-karmanah ksayaya jagato ‘hitah

Following such opinions, the demoniac, who are lost to themselves and who have no intelligence, engage in unbeneficial, horrible activities meant to destroy the world. We do not have to go far for the examples. Present-day is rich with them, more than in the past. When common man observes these horrible and unbeneficial acts, fear, disbelief and cynism grows in him. He does not have to be a demon, but he is daily exposed to effects of demoniac activities. More and more he thinks, “So much evil. So much wrong. Nothing good, no better alternative.”

Gradually he loses good faith, and finally stops to believe anyone and anything. Everywhere he sees only bad. No other choice is left for him, but to become a cynic, because he is not educated in the culture of Krishna consciousness. He knows not Bhagavad-gita. He does not know how to face such a load of badness. He at all does not know what to think about it. Therefore he joins the cynical attitude of a demon, “Everything is just bad and hopeless. Better I join the club of cynics and demons.” Then he becomes full fledged demon too. But saintly person, devotee of Krishna sees same things, but puts no faith in them. He know that everything is wrong and temporary, and that positive option rests behind – the soul full of knowledge, unending spiritual bliss and almighty God with absolute will, tolerance and kindness.

But cynic says something here too, “It is just your opinion.” He does not see and does not waant to accept something better. He always leans towards worse. Vaisnava always chooses better option. Fly is always looking for stool and rotting, but bee is seeking nectar. That is about nature. There is the dividing line between cynic and skeptic. Cynic does not want to see anything first-rate. He lives out from doubting any good intentions and ultimately doubting motives of God and His very existence. Whereas skeptic is pessimistic about being happy in the material world. He has no faith for a slight enjoyment and happiness existing without God. Here is a short story and a piece of history to illustrate how the construct cynic came into terminology. In ancient Greece was one ascetic saint, who lived in the forest.

He lived very humbly and was dedicated to some kind of meditation and yoga. His name was Cynic. Once Alexander the Great payed a visit to him. He wanted to serve him, and asked him what he could do for him. Cynic answered to him to move aside, because he is shading a sun for him. Alexander the Great understood that he is elevated saintly person, “I am such a big king, but he wants nothing from me. He is simply satisfied in himself.” In ancient Greece was a school established by Antishtenés. Its members called themselves cynics after saint Cynic. Characteristic of this school was ostentatious disdain of wealth and enjoyment, which was common for them and Cynic, except for ostentatiousness. Cynic could by his humble selfless way could impress even wealthy epicurean king, and show him the way to spiritual bliss. However, ostentatiousness stinks with pride, envy, i. e. with demoniac qualities.

This marks the path of modern cynicism. Antisthenés and his disciples should have better follow in the footsteps of saintly cynic. Derivation of word cynic is cynism, in Greek kynikós. I do not know Greek. This word may be derived from name of secondary school – Kynosarges – where philosopher Antisthenés teached. More often word kynikós is used meaning biting, malicious, coon, thus a man, who is like dog – kyón. Indeed suitable nickname for cynic. Eventually, we are unsettled by cynism, and we yield to it, but if we like to chant Hare Krishna, hear about Krishna and like to serve devotees of Krishna, cynism will dissipate in short time. That is definite hope.

To Be Heavy, Without The Weight