“This Life is for Serving Others” 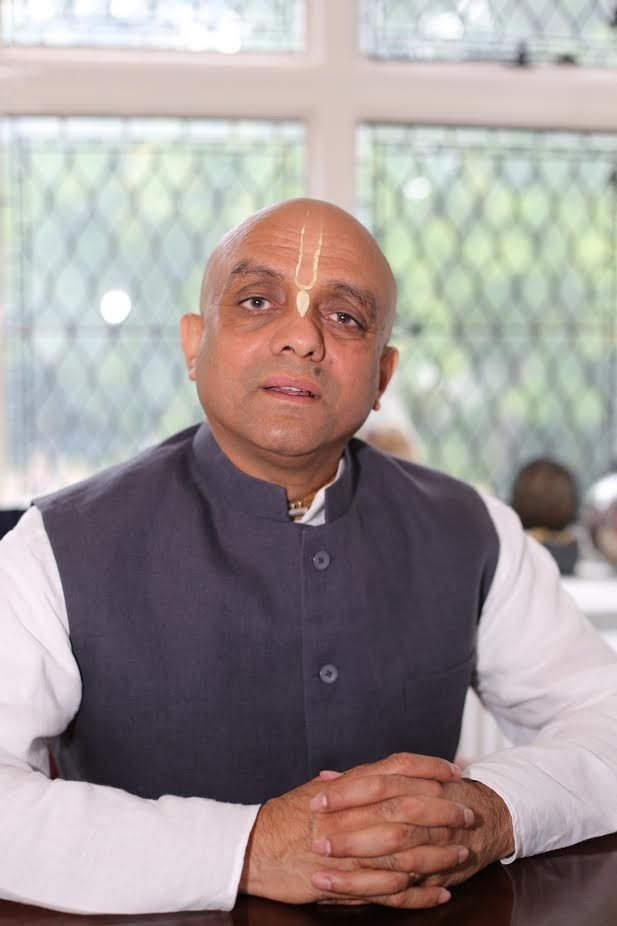 Srutidharma Das, the beloved son of Raojibhai and Dhanlaxmi Patel, and younger brother to Mukesh, was born in Jinja, Uganda in 1958. As a twelve-year-old boy he made the journey to London with his family and grew up in Wembley.

Around the same time, the early devotees of Krishna came from America and eventually started a temple at 7, Bury Place near the British Museum. It was there, at age 19, that the young Shailesh Patel met Srila Prabhupada and became very impressed with his words and mission.

After graduating in biochemistry, Srutidharma was engaged in heart research. Some months later, he took part in the Mahabharata Youth Club, an initiative for the young people of Harrow, Wembley and Southall started by Akhandadhi Das of Bhaktivedanta Manor. Along with two friends he became an enthusiastic member of the youth club, taking part in energetic kirtans and plays. After Akhandadhi Das persuaded them to join the temple in 1980, the three friends became the first of many young devotees to become sadhus from the local community, much to the surprise of their families. The two friends eventually became Pranabandhu Das and HH Atmanivedana Swami.

Srutidharma quickly became an indispensable member of the outreach team and visited thousands of families in London over the next decade. He was known for his ability to present Krishna in an attractive manner and always had the right story or scripture verse for any occasion. He sang, acted in dramas, gave speeches to crowds great and small, conducted samskaras, and raised funds. No task was too big and no service too menial for him, and he turned his hand to a remarkable variety of initiatives and projects with enthusiasm and determination. In doing all this, he was always a charming gentleman to those he met, and a genuine sadhu. His skills and affectionate dealings with others impressed a generation of worshippers at the Manor, and when Srutidharma asked them to help Srila Prabhupada’s mission they would often accept the invitation, becoming donors, life members, ‘sevaks’ and patrons.

When Bhaktivedanta Manor was beset on all sides with challenges to its very existence, Srutidharma proved indispensable to the campaign to keep the temple open. Whether through a sponsored walk in 1989, fund-raising dinners, meeting members of Parliament and Hindu leaders, Srutidharma coordinated the campaign through various community networks. He spent months at the end of 1993 and early 1994 touring the country to request all Hindu groups to unite to demonstrate their concern and to fight the proposed temple closure. Eventually, his energetic campaigning and urgent request that each town send a coach or two to London brought 36,000 people onto the streets before the Houses of Parliament.

After the grand victory in 1996, Srutidharma and Pranabandhu jointly formed the Bhaktivedanta Manor Foundation (BMF). Two years later, in the Spring of 1998, Srutidharma was married to Sri Radhika Dasi. They shortly became the proud parents of a son, Nitai.

As a priest, chaplain to the Mayor of Harrow, interfaith leader and religious minister, Srutidharma was also involved in publishing. He became the head of publications and conceived, designed and edited a series of publications for the Manor, including paperback books, magazines, guides, leaflets, calendars, websites, and the famous Janmashtami Souvenir Book.

Srutidharma Das formally became the president of Bhaktivedanta Manor on the 18th of July 2010. Over the last ten years, and until only months before his passing, he continually expanded his range of relationships to include chaplaincy, visits to schools and businesses, sankirtan street processions, visiting members of Parliament, conducting corporate events, informal house gatherings and larger spiritual retreats. He was interviewed by newspapers, radio and television. He offered kind hospitality to visiting leaders of all religious groups and encouraged the congregation and volunteers in their spiritual lives. He met many dignitaries including chief rabbis, archbishops, two Prime Ministers, members of the royal family and Her Majesty the Queen.

Srutidharma Das gave his life selflessly and wholeheartedly in the service of Srila Prabhupada and Radha Gokulananda. For forty years he was a major pillar of the activities and achievements of Bhaktivedanta Manor, a genuinely warm and affectionate brother and spiritual teacher to thousands, and a sadhu who united all in service to Krishna, the Lord of his life.

Reflecting on your glorious life and departure from this world...
Bhaktivedanta Manor Gurukula Ramayana Film
Tagged under: Nectar