HDG Srila Prabhupada: So you should always remember that you have taken on a very, very difficult task! 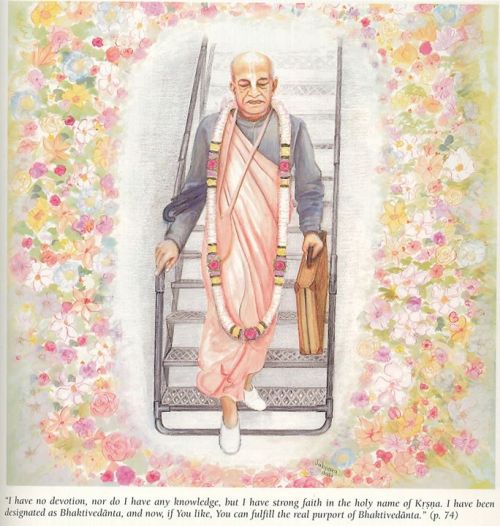 HDG Srila Prabhupada: “ I WENT TO YOUR COUNTRY [USA] NOT TO BE SUCCESSFUL ’‘and ’’I CROSSED MANY OCEANS”–
So you should always remember that you have taken on a very, very difficult task. Not very easy task. But one thing is sure, that if you be successful or not successful, it is your victory. Because you tried for this, Kåñëa will be very much pleased. That is your victory. Not that in every day you will be successful. That is not. I went to your country not to become successful. I knew, “Who will accept? Just let me try.” My Guru Maharaja said. I thought that “I shall loiter in the streets for few days more,” that’s all. Actually I did that. No friend, no shelter, no nothing; everyone is loitering, here and there. And finally, so disappointed, I went to the ticket office, and then I was speaking about to go back to India[laughs] That manager told me, “Swamiji, why you should go? You are coming.”“Yes, when I am disappointed I come; otherwise I don’t want to go away.” I told him. For one year continually. But when I took the risk of $200. [laughs] I had $200; I prayed, “Take this so-called beginning.” So that was actually the beginning.[ Renting 26 2nd Ave apt and storefront ] >>> Ref. VedaBase => Room Conversation – January 6, 1976, Bombay

Prabhupada: Loitering in the street. Nobody cared for me. Alone carrying the books.
>>> Ref. VedaBase => Room Conversations – March 20, 1977, Mayapur

The main thing is that I am alone and I am in my old age. Because of this, crossing twelve thousand miles in a ship, I became very sick. I crossed the Bay of Bengal, the Indian Ocean, the Arabian Sea, the Red Sea, the Mediterranean Sea, and the Atlantic Ocean. I passed through Asia, Europe and Africa. I crossed these oceans and seas and became so sick. Due to my request, they served me vegetarian meals on the ship, yet I could not take them. I fasted continuously for eight to ten days. The pitta (fire) increased so much in my body thus I suffered terribly from colic pain.Afterwards, the captain of the ship purchased an electric stove for me in Port Said. I then cooked for myself and took prasada. If they hadn’t managed this stove for me, maybe there would have been no possibility of me reaching America. I could have died on the way, but instead Krsna mercifully brought me here. Why Krsna has brought me here, only He knows.
>>> Ref. VedaBase => Letter to: Sripad Narayana Maharaja, 4 October, 1965