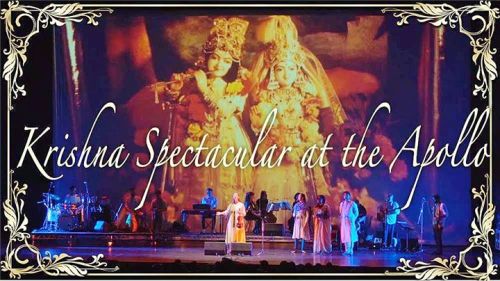 Krishna Spectacular at the Apollo – 50 years of Hare Krishna culture in the UK – Full show (video)
Complete film of the Krishna Spectacular show, celebrating the 50th Anniversary of ISKCON-London, which took place on the 24th November 2019 at the Eventim Apollo, London.

Krishna Spectacular is a modern artistic expression of ancient culture and timeless wisdom, bringing together performing arts from East and West.

The production is a sincere offering of love and devotion to Krishna with the deep hope to uplift the hearts of all who witness it. The vision behind this event was to deliver the essence of the bhakti tradition, in a way that’s accessible to all and any, regardless of their cultural background or beliefs.

*****
Krishna Spectacular was inspired by the life and teachings of Bhaktivedanta Swami, a holy man who journeyed from India to America at the age of 69, carrying copies of ancient Sanskrit texts with him. He arrived in New York in 1965 and brought the essence of bhakti-yoga and Krishna Consciousness with him. From New York, the vision spread to London and eventually throughout the whole world.

New Mayapur temple in France is looking for a fundraiser manager
The Vanaprastha-asrama and its practical application
Tagged under: Nectar