About the virus emergency by HH Jayapataka Swami 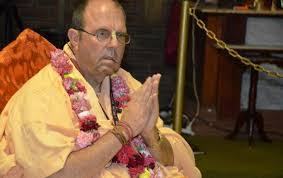 About the virus emergency by HH Jayapataka Swami – from Sri Mayapur (24 March 2020)
—–
“But first I would like to explain something about the present situation.
Here in Mayapur, and in the whole of West Bengal the government sent a notice out that until the 27th March, everybody has to stay indoors, and the only reason you to go out is to go outside is if you have to go to hospital or to buy vegetables and so on. We want devotees to chant Hare Krsna, from their verandahs, from the balconies. I don’t know who has brought up today, but I want to bring up a proposal that at particular times, everybody goes out on the verandahs and chants Hare Krsna. *But* *we cannot do Harinam in the street, * *we cannot have people coming over to your house, * *government set a rule that*
* no more than 7 people can be together* *and they have to stay 1 or 2 meters apart. *

Have to wash your hands and all that. So it is very serious. Because the number of people that were with corona virus in India was very low, it was like 105. And then it went up to 250 and I don’t know, this morning it was 415! It is growing like anything! And this is how it spread in Italy. They have like 20 or 30 thousand cases and more people died in Italy than died in China! So it is a very serious thing. We always think that we should chant, we cannot do the ordinary way. You have to do it from inside your house or your verandah, or your balconies. We cannot just go on the street and do Harinam. You are lucky, *if someone complains, * *they can arrest you and put you in jail! * *It is a serious thing.*

By making you an example they can save many lives, that is what they think.
We think that the invisible enemy of the virus can be defeated by the invisible weapon of the Harinam! That is a long term.
*But we have to follow the government rules.* I know that it is difficult for some people, we want to see everybody in the temple, we want to worship the deities, but what do we do? This is not only in India, it is all over the whole world there is a lockdown. I just thought it was only Malaysia, they are locked down, UK they are locked down, America, they are locked down many states. So, in America they had hardly any cases, but now they have over ten thousand! This in a short time. Because this virus came from animals, because people eat snakes, bats, all kinds of weird creatures and then the virus went from the animals to the human beings. We have no immunity. So, it may take us a year, how many deaths before we get immunity? They say for the vaccine to be checked and tested, it may take a year or so. So what to do? We had one devotee, elderly devotee, meeting the guests in Bhaktivedanta Manor, he got the virus through a guest and he passed away. I heard someone else passed. But generally, the devotees have been very lucky, they are very fortunate by Krsna’s mercy. But elderly people are especially prone. Like I am a very prone person. I asked the doctor what to do if I got it? Doctor said, don’t get it. We have no cure, we have no medicine, no nothing, no therapy! I am highly susceptible because I had a liver and kidney transplant, taking immunosuppressant drugs and many other conditions. So like that some of the elderly people they are very susceptible, but even now they found that in Europe, some of the youths are also dying. So previously they thought the youths were not so much, minor things but apparently the virus has mutated into two. One of them is, 30% is the new one which is very deadly. And the other 70% is not so heavy. So what do we have to do? This is a worldwide situation. It is a pandemic. And if it continues like this for 9 months a year then it becomes endemic. So what we are trying to do is to encourage everyone to *chant Hare Krsna from your balcony, * *from your verandah, stay in your house, * *don’t congregate, * *stay apart 1 meter at least*, and because if one of you gets it from someone then you become a carrier. Maybe you don’t have any symptoms but after two weeks you may be a carrier. So that is why they closed the schools because if one child gets it, he comes back and his parents get it, and the neighbors get it and pretty soon the whole town, community spread.
So we have to be very careful. At the same time, we want to chant, we want to read, we want to preach. So to stay together as a community I will appreciate if everyone can come out at certain times, say 5 o clock or something, come out and chant Hare Krsna on your verandahs!
*Not on the street! In your house!* So small groups of people keeping your distance, following the rules. Anyway, my coronavirus update! Ha! *There are some devotees doing Harinam and they are upset they are warned not to do it! But technically the government, if they find you breaking the rules, they can arrest you. * *Now you have a choice – go to hospital, Indian hospital or Indian jail!