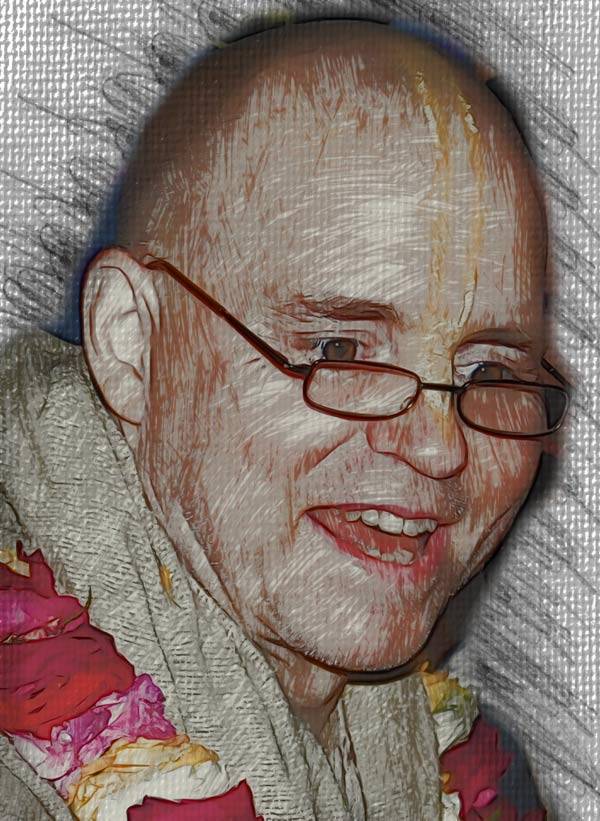 Another important point that I very much appreciated. Bhaktisiddhanta Sarasvati in his book, called Sri Caitanya and His Teachings, I think that’s the name of the book, or Sri Caitanya’s Teachings, yeah, Sri Caitanya’s Teachings, in that book, Bhaktisiddhanta Sarasvati states that of the five angas of devotional service – there are sixty-four angas, fifty-nine actually, but five are reiterated for emphasis. What are they? These are mathura-vasa, bhagavata-sravana, sri-murti prema-seva, sadhu-sanga and nama-sankirtana.

These are the five most efficacious processes of devotional service. In Nectar of Devotion it describes that attachment to any one of these can help to quickly generate bhava within the heart. BUT in Kali-yuga. . . it is a fact that these are the five most efficacious, but in Kali-yuga, Bhaktisiddhanta says, that these four, namely mathura-vasa, bhagavata-sravana, sri-murti prema-seva and sadhu-sanga, they cannot be complete without the performance of nama-sankirtana. No other anga of devotional service can be complete without also performing nama-sankirtana in conjunction with our attachment to any of these.

In other words you can hardly expect any of these other angas of devotional service to manifest bhava within our heart if we’re not performing nama-sankirtana also. If we’re not surrendering to the yuga-dharma, which is applicable to every soul making an appearance on this Earth planet in this Kali-yuga
(that means for the next 427000 years) . . . Kali-yuga is 432000 years, of which a mere 5000 at most has past. For the next 427000 years, nama-sankirtana will be the only yuga-dharma of this entire age. Without performing the yuga-dharma you can hardly expect to get the superlative result of engaging in any other anga of devotional service.

Therefore nama-sankirtana is of paramount importance, regardless of what other devotional process one may appreciate or attach oneself to.

Real sadhu-sanga, the highest sadhu-sanga is to associate with the sadhus in the context of the performance of the yuga-dharma, nama-sankirtana.

Similarly, you cannot get the full benefit of coming to Vrindavan, or going to Mayapur, or living your whole life in the dhama, if you don’t understand the importance of engaging in the yuga-dharma. The prodha-maya covering of the dhama will not be lifted. You can hardly expect to actually come to the position of seeing the dhama as it is, the aprakat Vrindavan where Radha and Krishna’s lilas are going on, even today, unseen by the common folks.

That’s part of it, but that in and of itself can never be complete without the performance of nama-sankirtana.

What is the purpose of the Bhagavata, the underline purpose? What is all the philosophy for? The philosophy is to convince you to chant and dance! Because chanting and dancing is something real. Chanting and dancing is the essence, the summum bonum of devotional life, the name of Krishna – Hare Krishna Hare Krishna Krishna Krishna Hare Hare Hare Rama Hare Rama Rama Rama Hare Hare.

Who is this name of Krishna? It is Radha and Krishna. Radharani is in the veiled form to increase Krishna’s curiosity. That is parakiya-bhava. Therefore this maha-mantra. The maha-mantra is the Supreme expression of Radha and Krishna’s love for the fallen conditioned souls. To bring them (the fallen conditioned souls) into their fold, into their dancing party. It begins with dancing and chanting in Lord Caitanya sankirtana movement and it culminates in dancing and chanting in the realm of Vraja in the association of Radha and Krishna and the gopis and the cowherd boys.

Bhaktisiddhanta Sarasvati goes on further to say that any anga of devotional service, any sadhana can be lauded as sadhana, to the extent that it encourages one to engage in nama-sankirtana. Furthermore, any anga of devotional service, even if it is an anga of bhakti, to the extent it detracts from ones absorption in nama-sankirtana, to that extent it can be considered as an anartha or an impediment on one’s progressive path to the ultimate realization of nama, nama-tattva.

So, these may sound like revolutionary ideas, but it’s not Aindra das who is coming up with these ideas. These are statements of our acaryas. Someone may argue, “Wait a minute. How is Deity worship considered as an anartha?” But if Deity worship somehow or other impedes your absorption in nama-sankirtana, then how are you going to make progress when the Deity is mainly satisfied by the performance of nama-sankirtana in this age of Kali? That also should be taken into consideration. How much important, therefore. is nama-sankirtana in the lives of the devotees of Lord Caitanya’s sankirtana movement!