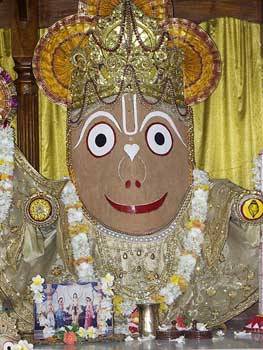 At the time of Sri Caitanya Mahaprabhu, a devotee named Jagadisha Ganguli lived in a small village near the present-day Mayapur. Jagadisha was a highly elevated Vaishnava and even though he was very old, still every year he would make the 900km journey on foot to Jagannatha Puri on the Bay of Bengal. He would travel with other devotees from Bengal to meet their most dear Lord Caitanya, have darshana of Their Lordships Sri Sri Jagannatha, Baladeva, and Subhadra Devi, and participate in the ecstatic Rathayatra. After four months they would return to their homes in Bengal.

One day Jagadisha’s happiness was ruined. He was stricken with a serious disease that left him totally blind. When he realized that he could no longer see the divine forms of Lord Caitanya and the Jagannatha Deities, he became very depressed. Worse yet, his friends considered the annual pilgrimage to Puri too long and too dangerous for a blind man and they refused to take him along with them. Jagadisha remained in Navadvipa in constant lamentation and despondency. Out of hopelessness he even considered committing suicide.

Then one night Lord Jagannatha appeared to Jagadisha in a dream. The next morning, the Lord told him, when Jagadisha went for his daily bath in the Gaìga a log would touch his head and restore his vision. The Lord told Jagadisha that he should take that log and go to a nearby village where a devotee-carpenter lives. The Lord explained also that the carpenter would refuse the work because he was a leper and had deformed hands. Jagadisha would have to insist, and convince the carpenter to do this work. On completion of this job, the Lord assured, the carpenter’s leprosy would immediately vanish.

Upon awakening, Jagadisha was amazed at his dream. He immediately left for his morning bath in the Gaìga and became ecstatic when a log touched his head and restored his vision. He took the wood and went to a nearby village, where he searched and searched until he found a leper-carpenter. Jagadisha implored the leper to carve a deity of Lord Jagannatha from the wood, but the carpenter flatly refused. He showed Jagadisha his deformed fingers and asked him, “How is it possible for me to carve the divine form of the Lord with these hands?” But Jagadisha insisted. He explained to the leper that his leprosy would be cured once he finished the carving. Finally the leper agreed.

Jagadisha stayed with the leper as he was working and saw him suffering terribly. Blood and pus oozed from the stumps that were once his fingers and he wanted to quit the work. But Jagadisha encouraged him and enabled him to forget his agony long enough to finish the deity of Lord Jagannatha. The very moment he finished, his leprosy disappeared.

Jagadisha took the deity to a site near the present Jagannatha temple and established His worship there.

A few nights later, Jagadisha had another dream. This time Lord Jagannatha instructed him to take some nearby neem wood to the same carpenter and have him make deities of Subhadra and Balarama. Jagadisha did so and installed Them in the temple next to Lord Jagannatha.

Legend has it that after the demise of Jagadisha Ganguli, the Lord, being dissatisfied with the neglectful state of His worship, decided to end His manifest pastimes. Suddenly there was an outbreak of cholera. The inhabitants of the surrounding area assembled at the temple and prayed to Prabhu Jagannatha to have pity on them and save their lives. That night, Jagannatha came to the head priest in a dream and said, “One of the housewives of the Ganguli family, who is characterless, dared to dishonour me. For this offense everyone in the Ganguli family and the village will die if they do not leave the place.” The next morning the villagers found the members of the Ganguli family dead and immediately deserted the entire area.

Since there was no more worship at the temple, Lord Jagannatha, Subhadra, and Balarama were forgotten, and save for the flat roof over Their heads, the temple fell down around Them and was soon covered by the surrounding jungle.