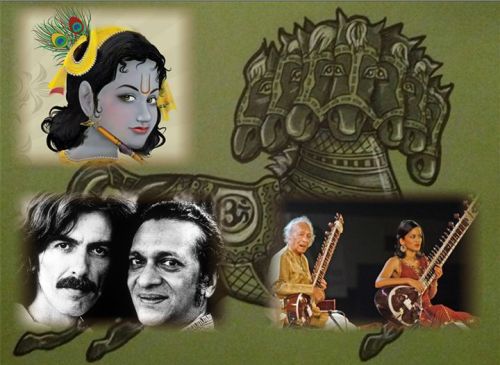 “I Am Missing You, O Krishna” (5 min. video)
Norah Jones performing “I Am Missing You, O Krishna” is a song by Indian musician Ravi Shankar, sung by his sister-in-law Lakshmi Shankar and released as the lead single from his 1974 album Shankar Family & Friends. The song is a rare Shankar composition in the Western pop genre, with English lyrics, and was written as a love song to Lord Krishna. The recording was produced and arranged by George Harrison, and it was the first single issued on Harrison’s Dark Horse record label.
Norah Jones: Today I was meant to be in London playing a concert of music by my father, Ravi Shankar, for what would have been his 100th birthday. Instead, I will share with you my at-home version of one of his western compositions, “I Am Missing You”. This song hits me as a beautiful prayer at this moment. He died in 2012 at the age of 92 and until then he was still creating and playing music for people. He never stopped. Music heals and music helps and I believe that it kept him young at heart. Happy birthday, Pops!
Watch it here: https://is.gd/O5xtiP

One Who Remembers the Name of Dhanvantari Can Be Released from All Disease
All Auspicious Panna - Priya Sakhi Dasi
Tagged under: Nectar

Why Was Balaram Affectionate to Duryodhan? Madhavananda Das: A…