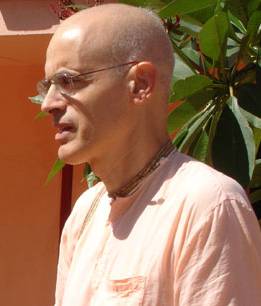 Every year the North American office of the Bhaktivedanta Book Trust publishes an “Art Calendar” with all the most important Vaisnava dates for North America. This year, as in past years, we noted under Pandava-nirjala Ekadasi (coming up on June 22) that one should observe a “total fast, even from water, if you have broken Ekadasi.” It has been pointed out to us that the only instruction Srila Prabhupada gave concerning breaking Ekadasi is that if one does so inadvertently one should observe Ekadasi fasting the next day. There is also this quote concerning Bhima Ekadasi (another name for Pandava-nirjala Ekadasi):

Ramesvara: So I’ve been told that if one fasts on Bhima Ekadasi, that it is like fasting on all the Ekadasis. Is that true?

This is an apparent reference to an account from the Brahma-vaivarta Purana. In a BTG article written back in 1994, Rohininanda Prabhu summarizes this pastime and relates how ISKCON devotees have responded to it in their own practice of Krsna consciousness:

“Once a year in the early summer there is a special Ekadasi known as the Pandava-nirjala Ekadasi or Bhima Ekadasi. Back in the days of the Mahabharata, five thousand years ago, Arjuna’s elder brother Bhima had great difficulty fasting. (In those days everyone would fast completely from all food and water.) So he was given permission by the sage Vyasadeva to observe the full Ekadasi fast only once a year. In the Krsna consciousness movement many devotees are accustomed to following this Bhima Ekadasi, refraining from all food and water, to compensate for any discrepancies in their observance of the previous twenty-three Ekadasi days.”

So we can conclude that although to compensate for having broken Ekadasi in the previous year some devotees observe a total fast on Pandava-nirjala Ekadasi, refraining even from drinking water, there is no injunction from Srila Prabhupada to that effect. However, Prabhupada did conform that fasting on Bhima Ekadasi is like fasting on all the Ekadasis. Also, concerning the nirjala aspect of Ekadasi, Srila Prabhupada did say this:

“Ekadasi day — there is no eating sumptuously. Simply you take little fruits and flowers. Try to avoid that also. You don’t take even water. That is really ekadasi. But because we cannot do it — in the Kali-yuga the time is different — therefore we are allowed to take little fruit and milk, which is called anukalpa.”

Ekadasi is a serious thing. As Srila Prabhupada says in his Caitanya-caritamrta (Adi 15.9, quoting from the Skanda Purana), “A person who eats grains on Ekädaçé becomes a murderer of his mother, father, brother and spiritual master, and even if he is elevated to a Vaikuëöha planet, he falls down.” If we break Ekadasi inadvertently, we can make it up the next day. As for following Pandava Nirjala Ekadasi strictly, without water, that’s up to each devotee to determine according to his or her capacity. In future calendars this Ekadasi will be listed without any accompanying note.