The Chaitanya School: Role of Ethics 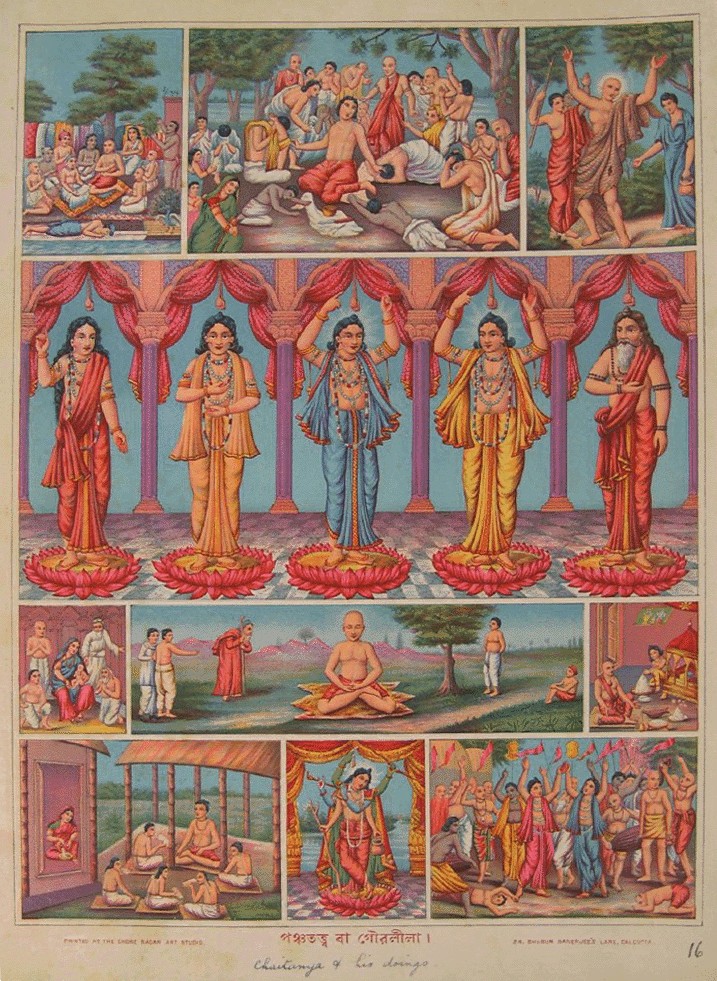 Any discussion on religion remains incomplete without a reference to moral and ethical values. The case of Gaudiya Vaishnavism is no exception to that. It is true that ethics has not been systematically treated by the Gaudiya philosophers and that the issue in question has not been discussed independently, yet the fact remains that morality or ethics remains the sheet-anchor in their thought system. The philosophers of this school maintain that spiritual progress is hardly possible without moral endeavour; hence, they consider religion and ethics as inseparable As a matter of fact, the merging of the two remains an important feature for them. However, in the absence of any methodical exposition, we have to draw largely upon the teachings of Sri Chaitanya and the examples set by him and his close disciples.

The supreme goal of religious life is to achieve an insight into the nature of Truth. Truth is attainable by a complete self-surrender to the Supreme while giving up all worldly desires. Self-surrender leads to the attainment of His grace. By attaining this grace, a devotee attains some of His virtues. Krishnadasa Kaviraja clarifies thus:

In the same spirit, Krishnadasa Kaviraj has enlisted the aforementioned virtues. A Vaishnava, according to Sri Chaitanya, must possess the qualities of compassion, love, forbearance, generosity, truthfulness, freedom from all worldly attachment and a complete control over the senses. He must be free from all kinds of impurities, such as, passion, desire, hatred and lust; he is also expected to remain calm and balanced under all circumstances of life. Vices like greed, anger and jealousy are enemies to a devout life. The Srimad Bhagavatam depicts such a virtuous devotee as a sadhu or one of the highest character. According to the Srimad Bhagavatam:

titiksava karunika suhrida sarva-dehinam
ajata-satrava santa sadhva sadhu-bhusanah
“He who is tolerant, compassionate, a friend of all and enemy of none; he remains engrossed in the thought of Krishna and remains verily a man of highest character, a sadhu.” (Srimad Bhagavatam, 3.25.21)

While describing the Vaishnava code of conduct, Sri Chaitanya has laid down certain ethical commandments, an adherence of which remains necessary and vital for a devotee of Krishna. The krishna-bhakta or a devotee is expected to give up the company of evil persons, agnostics and women; their association not only disturbs the equilibrium of the mind, it also drives the devotee away from God. Association of good and pious people (sadhusanga) whose only object of thought and discussion remains Krishna is to be preferred. In the process, the devotee develops sraddha or faith in Krishna. This faith deepens and takes the form of love. As a result of this love for Krishna, all his worldly attachments wither away. In the words of Shri Chaitanya:

Presently we shall examine the attitude of Sri Chaitanya to varnashrama-dharma. As is known, the varnashrama-dharma was propounded in the Manu-samhita (the oldest Indian law book) and remained the central core of Hindu ethics. According to the said text, the human race is organised into four natural psycho-physical types (varnas); likewise, each individual life is divided by Manu in four natural stages or stations (ashrams). The four varnas or castes (brahmana, kshatriya, vaisya and sudra) were created according to the individual merits of each person. However, during the passage of time, rigidity appeared in the ancient social system when the individual character and conduct (gunakarma) was no more being taken into account. Caste was determined by one’s birth in a particular varna alone. Such an inflexible expression of the varnashrama-dharma brought in its wake inequality and it was against such a state of affairs that Sri Chaitanya raised his voice. In this regard, the Master’s clarion call to his followers was to leave the varnashrama-dharma altogether. According to Sri Chaitanya, a Vaisnava has no caste and his only duty or svadharma consists in serving Lord Krishna alone and reciting His name. Further, Sri Chaitanya sincerely believed in the concept of individual equality and never considered caste-rank as a criterion for determining one’s social superiority. In Sri Chaitanya’s expression and opinion, a candala (pariah) may even be considered superior to a brahmana (high caste) if he is pious and recites the name of Krishna; conversely, a brahmana ceases to be so if he does not worship Lord Krishna. Vrindavana dasa has faithfully reported the words of the Lord thus:

In order to instil a sense of equality in the contemporary society, Sri Chaitanya declared that all and every body remained inseparable parts of the Divinity; every single heart is the abode of Lord Krishna. It is in this sense that all are to be treated as equal and each member of the society irrespective of caste and rank should be honoured. Krishnadas has faithfully reported, jive samman dive jani krishna adhisohan (Chaitanya Bhagavata, Antya, ch. 20, p.731). Further, jiver ‘svarupa hay krisnera nitya-das’ (Madhya, ch.20, p. 840) which means that every individual is an ever-attendant of Krishna and hence they are equal.

Sri Chaitanya denounced varnashrama-dharma not only because it creates inequality, but also because it implants in the minds of the followers the desire to attain material happiness either in this life or the next. As long as such desires are there in a man, he cannot attain the grace of God. And without the grace of God, he fails to become a true devotee and attain God. Varnashrama-dharma therefore cannot be accepted as an integral part of devotion.

Along with an uncompromising devotion to God, a Vaishnava is expected to show perfect tolerance to other systems of faith and religion, refrain from criticising other Gods and religions. Further love and compassion have been extolled as the two cardinal virtues by this School. Along with this they have also called upon the faithful to practice non-violence in every manner-by thought, word and deed. Humility remains another characteristic virtue. In words that have become classical, Sri Chaitanya has urged:

trinad api sunicena, taror api sahishnuna
amanina manadena, kirtaniya sada hari
‘A Vaishnava in his daily life should be humbler than even a blade of grass. Without having pride in himself, he should honour others. He must be tolerant like a tree which does not beg water even if it dries up. He should live a very simple life and must recite the name of Hari at all moments.’

Practising non-attachment to worldly objects remained another important virtue preached by this School. In the light of the Bhagavad-gita, Sri Chaitanya insisted that one must do the duties of life without waiting for the results and in a spirit of dedication and service to Krishna. Sri Chaitanya’s views were very clear. Prema or love for God remains the highest purushartha (object of desire). The four traditional purusharthas (dharma, artha, kama and moksha) were rejected by him as relatively insignificant. It may be mentioned here that moksha as the goal of life is given the highest value by almost all Schools of Indian philosophy. It is only in the Chaitanya School that this has been treated so insignificantly; the reason behind this may be that while the devotee’s only object of desire is to attain God by means of love, the mumuksatva (one desirous of liberation) aims at the union of the two (that is the devotee and this object of devotion.) Thus moksha acts as an obstacle in the path of krishna-bhakti and cannot satisfy the devotee’s desire to live in the constant company of God. In the event of this merging of the two (the devotee and the object of devotion), the very desire in a devotee to live in the constant company of God gets jeopardised. The devotee does not want to become one with God; he prefers to remain separate and enjoy the bliss of his company.

The Haribhaktivilasa of Sri Sanatana Goswami and Sri Gopal Bhatta gives us a detailed account of the ritualistic observances and devotional practices. The above text referring to vaidhi-bhakti, though consisting of mechanical observances of the various injunctions, has certain positive ethical significance. While the devotee remains completely engaged day and night in the performance of the rituals, he cannot help but think of God. A blind following of the various rituals brings forth a constant remembrance of God and this naturally purifies the mind of a devotee. The devotee somehow feels naturally drawn towards the Lord just as the senses are automatically drawn towards the desired object. In fact, external observances like the worship of the Deity, the offering food to Him, partaking of the food offerings, the chanting of the holy name, singing songs to His glory, performing arati with light, incense, conch-shell, repeating the sacred name and so on and so forth are intended to gradually bring a state of composure by diverting the mind from various sense objects to God and God alone. Aside from these daily duties, the devotee is also expected to observe fasts on various occasions, and thereby imposes self-restraint.

Thus, in various ways, the Chaitanya School provides modern man with a complete ethical pattern. It enriches the thought-system of humanity as a whole. By all means it has a global significance, because such an ethical network is universally acceptable.

Sri Chaitanya maintained the same stand while formulating the necessary requirements for being a guru (spiritual preceptor). The followers of Sri Chaitanya have canonised this liberal attitude in the Haribhaktivilasa. A high born, in spite of his learning, may be technically unfit to become a guru, if he is a non-Vaishnava. (Haribhaktivilasa p.9 verse 54; also see p.35, verse 12)

What do we know?