A Response to The Chaitanya School: Role of Ethics 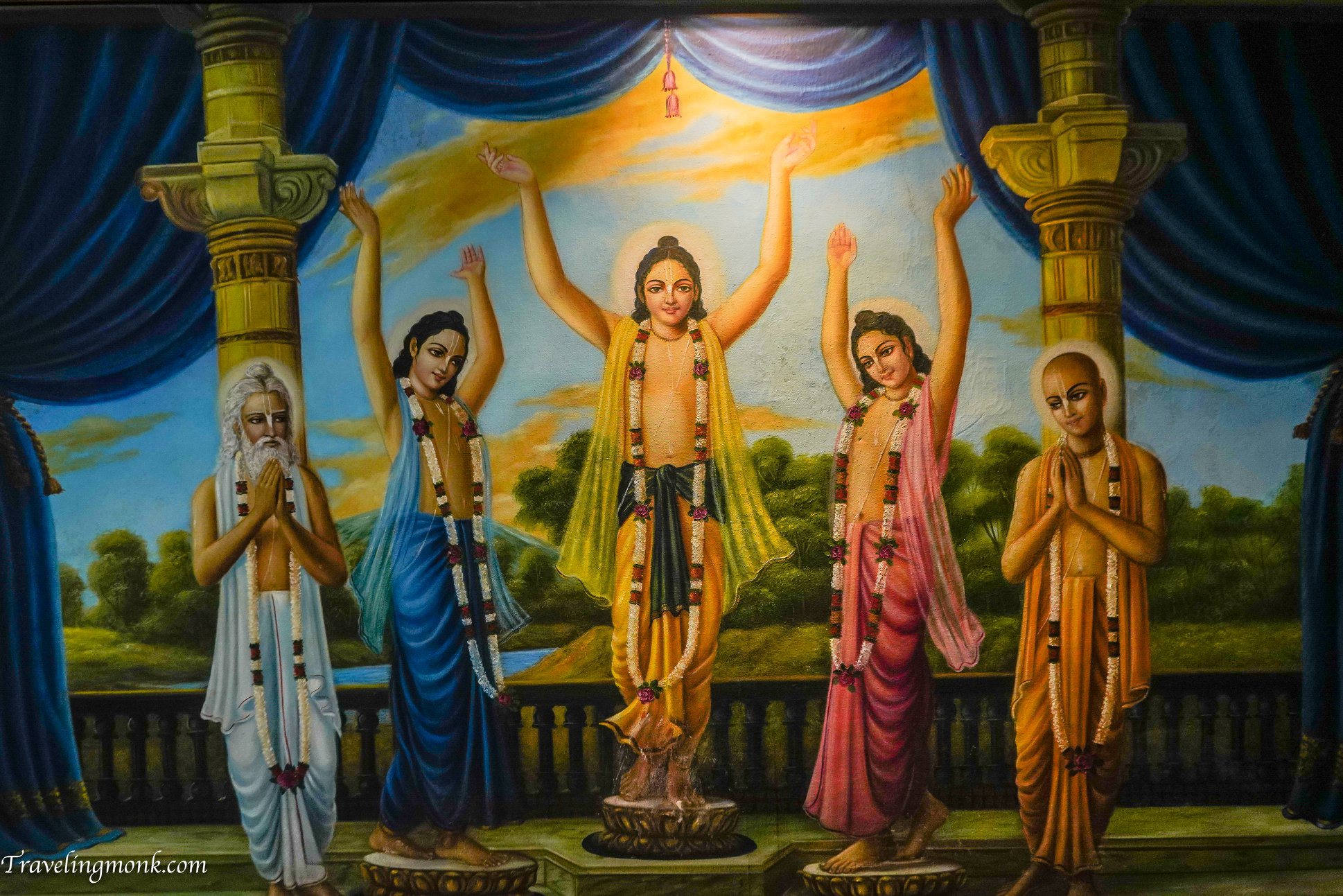 It was good to see a scholar tackling the uncertain area of morality in Vaishnavism, as did Ms Chatterjee with her essay, ‘The Chaitanya School: Role of Ethics’. I found her essay thought provoking and a valuable contribution to what I feel is an area requiring much discussion. Although, as Ms Chatterjee rightly pointed out, Vaishnavism holds that ‘spiritual progress is hardly possible without moral endeavour’, the first requirement being of course the ‘four regulative principles’, it is still somewhat hazy, especially amongst ISKCON followers, exactly what our code of ethics should be. Do we follow varnashrama dharma or not? Are Vaishnavas transcendental to all external designations and thus the duties pertaining to them? How much is a Vaishnava serving Krishna to be bound by codes of worldy morality?

Of course, one would expect a Vaishnava to display the highest moral character, and indeed Ms Chatterjee’s first point was that one who surrenders completely to the Lord will thereby attain similar qualities as those possessed by the Lord. In other words, by virtue of their surrender to God, Vaishnavas should naturally evince all godly qualities. She cites some of the many scriptural verses supporting this point, describing how a genuine sadhu or saintly person will evince superlative standards of morality.

From our experience in ISKCON, however, we have seen that such morality is sometimes lacking amongst our members. Even though we are a society dedicated to the service of God, we still have to deal with, from time to time, cases of moral turpitude. From my own experience as a temple leader and National Secretary of the Society in the UK, I have seen many such cases, ranging from disputes over property ownership, to sexual transgressions, accusations of deceit, and well as various other things. When these instances arise we often find ourselves dealing somewhat arbitrarily. That is to say, we do not refer to any systematic codes of behaviour. Of course, where there are direct and obvious statements made in our scriptures then these are followed, but for the most part such directions are few, and more often than not it is left up to a group of devotees, or perhaps even just the temple leader, to arbitrate.

Obviously, there is a need for a clear set of guidelines to enable us to deal consistently with misbehaviour in the Society. Every society has its laws and codes of ethics, but in ISKCON this is presently lacking, despite our being a society based upon the tenets of scripture. These days, of course, morality is becoming something more dependent upon circumstance and vox populi than anything else, the so called ‘moral relativism’. But all laws and moral codes were originally derived from scripture. The Ten Commandments, for example, are the original basis of law in Christian countries. All scriptures offer comprehensive moral guidelines which are still followed to a greater or lesser degree in most civilised societies. However, in ISKCON we have no systemised code derived from our own scriptures, the Vedas, and are thus often solving our moral conflicts either by expedience, that is, moral relativism, or by a mix of whatever Vedic morality we may have imbibed, along with our previous training in other moral codes, perhaps Christianity or some other religion.

The Vedas do provide many moral guidelines, although, as I mentioned earlier, there are not so many in the Vaishnava scriptures such as Bhagavad-gita and Shrimad Bhagavatam. Again, this is because it is assumed that from the very beginning a Vaishnava will already be on the highest platform of morality, indeed transcendence. He simply has no interest in mundane pleasures. Srila Prabhupada sometimes made the point that Krishna in the Bhagavad-gita does not tell Arjuna not to steal, or to covet another’s wife. Why? Because for a man like Arjuna there was no question of such behaviour, but what do we do if we find that aspiring ‘Arjunas’ in the Society still have such tendencies? Although Ms Chatterjee makes the point correctly that Vaishnavas are transcendental to mundane morality, this also implies that, as with Arjuna, they are beyond and above any moral misbehaviour. If we are seeing the latter then the assumption of transcendence cannot be made, and we need to think about the application of moral codes.

In applying Vedic moral guidelines, however, there are some knotty problems. For example, one of the most famous and comprehensive texts of morality is the Manu Samhita. I often hear ISKCON devotees citing it, and in fact in the Bhagavad-gita, Shrila Prabhupada says that executive leaders in society should be familiar with this book (Bg 3.21 purport). But how do we apply it now? So much of that text seems to only have application to a time long past and an entirely different culture from that of today. Parts of it would even be impossible to apply as it calls for punitive measures which are simply not acceptable in today’s society. Nor do we know if these measures should be applied anyway, as it is clear from studying Vedic moral texts that they have varying applications according to different times, places and circumstances. Although it may sound similar, this is not the ‘moral relativism’ as it is known today. Vedic morality, unlike modern moral relativism, is always based upon scripture, but there needs to be a skilled interpreter of the scripture who is capable of applying it appropriately. In classical Vedic society this would of course be the king and his ministers, advised by well-read brahmana counsellors. Such persons are in rather short supply at the moment.

Perhaps the biggest problem though, is that the Manu Samhita, and indeed the entire system of Vedic morality, depends upon the division of society into varnas and ashramas, the traditional occupational and spiritual castes. There are different moral codes for all of the different castes. But again that is hardly acceptable today, as it conjures up ideas of enforced casteism, leading to the abuse and exploitation of the so-called lower classes. That is the present experience in India, at least. The remains of the Vedic varnashrama system as it is seen today in India is not something anyone would want to emulate quickly. If varnashrama is to be re-introduced in ISKCON or anywhere else, it would have to be in a quite different way to India today, and it would need to take into account the reasons why the system in India became degraded into its present lamentable condition.

Clearly there are no quick and easy solutions to the problem of finding a workable code of ethics based upon the Vedas. Perhaps, just as Shrila Prabhupada adapted even the Vaishnava practises to suit his followers in today’s society, someone or some group of persons will need to adapt the system of Vedic morality from books like the Manu Samhita, and other such standard texts.

We can start by researching ISKCON’s canon to see what its founder Shrila Prabhupada said on the matter. From my own research I see at least that he frequently calls for the application of varnashrama dharma. Also, as with the above cited quote from the Bhagavad-gita, he does expect that there will be moral guidance given by the leaders in society, based upon Vedic texts. And from our own experience, as I began by saying, we are already seeing the need. A need which, in my view, will be felt more and more strongly as ISKCON grows.

In conclusion then, whilst I think Ms Chatterjee has made some good points about the morality of Vaishnavas, I also think we need to take a more realistic view of our present society of Krishna devotees, at least ISKCON. I feel she has dismissed varnashrama dharma too lightly and I would like to see more discussion on how this system can be implemented properly in ISKCON. I would also like to see us trying to understand texts such as the Manu Samhita and how they can be applied today. In that way I would hope we could provide a working example of something better than moral relativism; a framework of ethics and morality based upon the teachings of the Vedas.

The Glories Of Srila Haridasa Thakura

Protecting the relationSHIP from sinking