Security cover for temples on Janmashtami 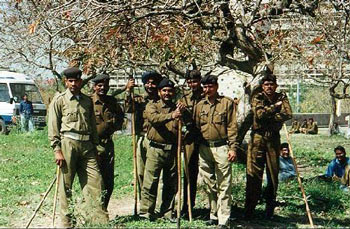 New Delhi, Aug 15 (IANS) After unprecedented safety precautions at vital places for Independence Day celebrations Tuesday, it is now the turn of temples to be placed under tight security cover Wednesday for Janmashtami, birth anniversary of Hindu Lord Krishna.

Delhi Police officials said the security arrangements made for Independence Day will continue for Janmashtami.

‘It is an important festival in the capital as people in large numbers throng temples on this day,’ said Manish Agarwal, additional deputy commissioner of police.

Around 6,000 additional forces from the paramilitary and Delhi Police were deployed at all prominent temples in the capital. The number of police personnel patrolling popular markets was also increased.

He said additional forces from the Central Reserve Police Force (CRPF) reserved battalions of Delhi Police would also be pressed into service.

At the Lakshmi Narayan temple, popularly known as the Birla temple, devotees will not be allowed to bring any liquid or traditional offering of coconuts into its premises.

‘We have banned people from taking liquids inside the temple and devotees can only take sweets, fruits and flowers,’ said Vinod Mishra, an administrator at the temple.

The ban follows a foiled terror plot in Britain last week in which terrorists were planning to blow off US-bound flights using certain liquids.

Temple authorities have asked devotees not to bring coconuts, as the fruit can be used to conceal an explosive. ‘We have set up a counter inside the temple premises where coconuts will be sold,’ he said.

‘This is the first time that such restrictions are being imposed,’ Mishra added.

Authorities at the popular International Society for Krishna Consciousness (ISKCON) temple have made elaborate arrangements to avoid any untoward incident on the occasion.

‘A three-tier security system has been formed and all visitors and temple staff will have to go through it before entering the temple premises,’ said Vijendra Nanda Das, director (communication) of the ISKCON.

Around 500,000 people had visited the ISKCON temple last year but the number is expected to rise this time despite the security threat in the capital. ‘We expect about 800,000 devotees to visit out temple on Janmashtami,’ he said.

Das said that apart from over 1,000 private security guards, the authorities have posted around 700 men from paramilitary and Delhi Police at the temple.

One Response to “Security cover for temples on Janmashtami”