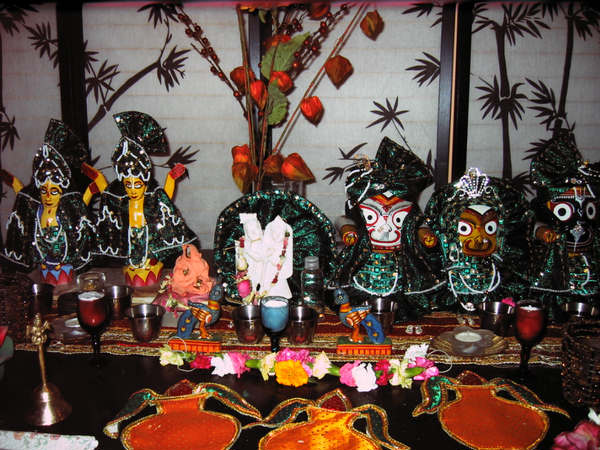 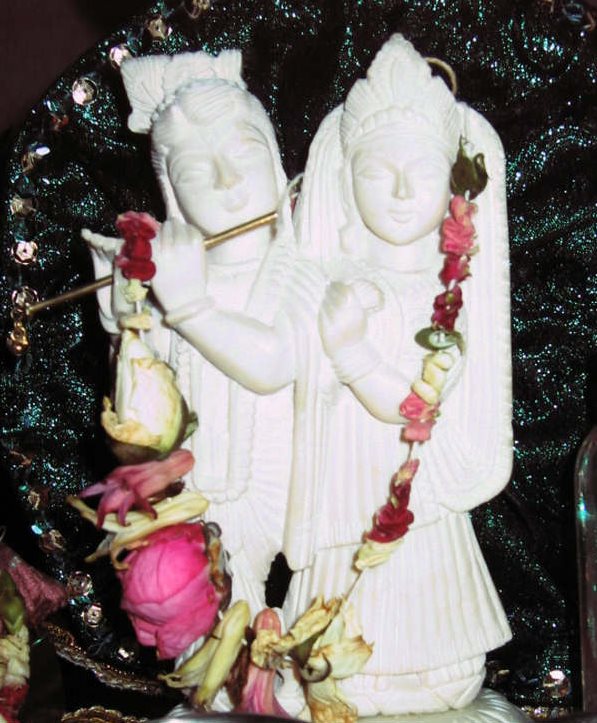 I feel very much blessed to have the shelter and ability to take darshan of Sri Sri Rukmini Dwarkadisha in New Dwaraka. I have lived in and outside of the temple community for over 33 years and throughout the years have had various spiritual realizations.

It is important for me to have devotee association and to go to the temple program. Even though I work full time and my day consists of many laborious hours I enjoy going to evening aroti and increasing my devotee temple association on the weekends

Last night a devotee was talking to me about various things and he asked me if I speak to Srila Prabhupada. My answer is: yes, I speak to Srila Prabhupada oftentimes. When I bow down in front of my home altar and in front of Srila Prabhupada’s vyasanna in the temple room I speak to him. Actually I pray to him. I thank Srila Prahupada for coming here to the West and giving me initiation. He gave me the real birth and the opportunity to go Back To Godhead. I feel grateful that even though he is not in his physical body and physically visible I still feel his presence and mercy. I have his memories to carry me and I have this eternal link by initiation.

One’s relationship and vows to one’s Guru is not based on if the physical body is here or not here. I know that by Srila Prabhupada’s grace I have this chance to not take birth again.

One time when Srila Prabhupada came to New Dwaraka he was passing out sweet balls instead of the traditional Prabhupada cookies. The temple was so crowded with visiting devotees, sannyasis and GBC I thought there was no way I could go up to get a sweetball. It was packed and everyone was jumping in ecstasy. I, however, had to go to the temple kitchen and perform service, and I was lamenting that I could not get a sweetball from Srila Prabhupada. At one point Srila Prabhupada started throwing the sweetballs up in the air and devotees went wild catching them. In my sadness I proceeded to exit and started to pay my obeisances. As I was lowering my head onto the temple floor a nice round sweetball was rolling on the floor aimed directly at my head! I was astounded, first because I could not see how this sweetball should have gotten crushed by so many packed jumping devotees – and secondly I was simply amazed that this sweetball came so quickly in my direction – just as I had simply surrendered and given up the chance and desire of getting a sweetball from Srila Prabhupada.

I like having an altar at home because it helps me focus more on the Lord and it reminds me to pray out loud. I have my privacy and special times with my Deities and this has blessed my home. Sewing for my deities is not only a service, however, it is very relaxing and therapeutic for me. I think that with every stitch, I pray that this is my menial effort to serve the Lord.

I remember when I was approximately 11 years old, on the Lower East Side in New York, right by my dentist I used to see devotees coming and going. That was the Second Avenue Temple. I was very attracted and knew it was about spirituality. I wanted to be a devotee. I really wanted to ‘be like them’. When I turned 17 I was on the subway and picked up an abandoned Back To Godhead Magazine. (This is the glory of Sankirtan). I read the Back To Godhead Magazine and immediately started chanting Hare Krishna and became vegetarian. I wanted to be a Hare Krishna devotee and wasn’t sure how I could become one. So I thought if I chant Hare Krishna and if I become vegetarian that is a start. And if I say some prayer to offer my food to the Lord this will bless the food that I eat.

One day I was at my lunch hour working on Wall Street and I heard the karatals. That sound was ‘so familiar’ and — then and there — I knew I had experienced this spirituality before. I knew the sound of karatals. I felt this was an awakening of a past life experience and I believed this was it for me. I found the chanting party and gave a $2.00 donation. The chanting party was leaving and a mataji gave me a chapati. That was first temple prasadam I ever tasted. I told her I was interested and wanted to be a devotee. She told me to come to the temple.

A few weeks later I came to the temple on a Sunday and walked in the middle of a lecture that Srila Prabhupada was giving. He was there and it was so glorious to come in contact with him. I had a difficult time understanding his accent, however, I listened with rapt attention. That is the day that changed my life. That was the beginning of my spiritual journey.

I pay my respects to all the devotees. Somehow please allow me to serve you.
Hare Krishna.
Omkara devi dasi